Yet more books for the gift-giving season: Political Theory 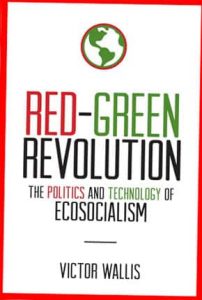 Red-Green Revolution: The Politics and Technology of Ecosocialism by Victor Wallis, 2018, Political Animal Press, Toronto/Chicago. 211pp. including index. ISBN 978-1-895131-29-1, $20. Described as “the definitive work on ecosocialism” by Roxanne Dunbar Ortiz, this book addresses not only the environmental crisis, but a socialist approach to natural science and technology, as well as the need to address imperialism and militarism, racism and class issues in relation to the environment, as well as necessary lessons from feminism. Willis says, “The environmental crisis and the capitalist crisis are …intertwined. Capitalism reaches its most extreme embodiment — in the form of a rapacious global empire governed directly by the super-rich, and with military outposts on every continent — in a process that …propels and is propelled by the sudden escalation of environmental dangers, tipping points and local or regional catastrophes. The arc of US military interventions … is also an arc of petroleum deposits, drought, desertification, food shortages, civil strife, and massive emigration.” Looking towards solutions, he says: ” The obstacles to a popular counter-thrust only magnify its urgency….What is lacking is the revolutionary political force that can build on … developments and carry them to the next level … how to channel anger into an informed and sweeping response…The relevant theory will have to speak at once to people’s immediate concerns and to their long-range hopes. Ecosocialist theory does this.” 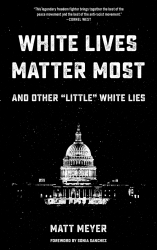 White Lives Matter Most and Other “Little” White Lies by Matt Meyer, foreword by Sonia Sanchez, 2019, PM Press Oakland, 108 pp. ISBN 978-1-62963-540-8, $14.95. This slim volume focuses on revolutionary non-violence as a means of achieving racial justice and social, economic and political transformation through intensified solidarity consciousness. It includes a number of essays, some written by Meyer himself, some with collaborators and co-authors such as Fred Ho, the late “Afro-Asian” musician and pro-matriarchal ecosocialist theoretician; and Ana Lopez, a leader of the Puerto Rican independence struggle and the successful movement to free Oscar Lopez Rivera, the “Nelson Mandela of Puerto Rico.” Meyer declares: “If we are to get to a point where white lives no longer matter more than other lives, it will be because enough of us have confronted our history and our contemporary conditions with intensity, honesty, and a non-sectarian approach to all those who fight for freedom and liberation in various forms.” The material on “removing our ‘white-colored’ glasses,” and on learning lessons from the Puerto Rican experience are especially valuable. 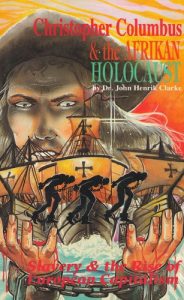 Christopher Columbus and the Afrikan Holocaust: Slavery and the Rise of European Capitalism by John Henrik Clarke, 1998, eworld Inc., Buffalo NY, 123 pp., ISBN 978-1-61759-030-6, $10.95. Dr. Clarke is one of the foremost Afro-centric historians whose work has turned standard histories right-side up by focusing on the source of the wealth that built up the US and “the West,” and of the massive genocidal impact that build up had on the African people who created it. Clarke says: “Our holocaust … started 500 years ago and it is not over.. we start at sixty million, and we have just begun to count.” Clarke details how the economy of the ‘New World’ rested largely on the slave labor of Africans. “One-third of the trade for many years was with Santo Domingo (later Haiti)…Slavery and the slave trade was the first international investment in capital…. the first… that was intercontinental. …Europeans invested in ships and in the goods and services taken from African countries and became independently wealthy.” But Clarke also make it clear that his “major point is this: The African people who became slaves in the US have been many things in history … They have ruled great nations, and they have destroyed great nations … Slavery does not represent the sum total of our history.” 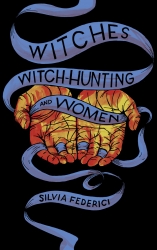 Witches, Witch-Hunting, and Women by Silvia Federici, 2018, PM Press, Oakland CA, + Autonomedia and Common Notion, Brooklyn NY, and Between The Linea, Toronto, Ontario, Canada, 106 pp. inc, index, ISBN 978-1-62963-568-2, $14. This collection of more recent writings by the author of Caliban and the Witch examines the connection between the birth of capitalism, enclosures, and organized violence against women and their communities. Although people sometimes associate “witch-hunting” with the “Dark Ages”, Federici situates it solidly in the 16th & 17th Centuries, in both Europe and the “New World” (e.g. Salem MA) and the consolidation of bourgeois power in nation-states. What’s more, she brings it forward to today, as new enclosures in Africa, India and elsewhere are drawing women into the global proletariat, while simultaneously dispossessing people and communities of their land, remolding women’s reproductive capacities, and dominating both physical and social reproduction under the interests of global capital. As Federici wrote in Caliban and the Witch, and develops in regard to Africa today, “the global expansion of capitalism through colonization and Christianization ensured that this persecution [of women] would be planted in the body of colonized societies…” Alluded to periodically, as in the impact of the enormous economic inflation caused by silver from the colonies in the Americas, is the development of capitalism itself on the basis of colonialism, land theft and racialized chattel slavery in the Americas and the Caribbean. These initial land closures and production systems based on the private ownership of land and human beings as forms of capital is what transformed the European empire-states and the conditions of women therein.