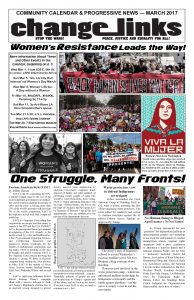 We Strike for Reproductive Justice for All; Labor Rights and a Living wage for all, including mothers and other care-givers; Full Social Service; Environmental Justice; an Anti-Racist and Anti-Imperialist Feminism

The first Women’s Day was observed in the U.S. in February 1909 in a large demonstration marking the one-year anniversary of the 1908 New York Garment Workers’ Strike. Quickly thereafter, women’s days became a rallying point around which people around the world protested war and fought for women’s suffrage. In 1917, a Women’s Day protest in St. Petersburg even triggered the revolution responsible for bringing down the Russian Empire. The Third International declared March 8 as International Women’s Day subsequently. In the US, the Women’s History archive in Berkeley CA resurrected awareness of IWD via the women’s liberation movement in the 1960s, and promoted March as Women’s History Month. In 1975 the U.N. established March 8 as its official International Women’s Day and initiated the Decade for Women the following year.

With more than 17 million women living in poverty in the US alone, over 600,000 women and girls trafficked internationally per year, and an estimated seven out of 10 women worldwide reporting they have experienced physical and sexual violence, why don’t more American women observe International Women’s Day? (Hallmark doesn’t even bother making cards dedicated to International Women’s Day or Women’s History Month.)

According to historian Estelle B. Freedman, the absence of celebrations in this country has less to do with our indifference than it does with the holiday’s long association with the Communist bloc.

“Before World War I, International Women’s Day really took off here during the suffrage and labor movement,” says Freedman, a Stanford history professor and author of No Turning Back: The History of Feminism and the Future of Women. “But then it was sustained as a communist, socialist holiday, particularly after the Russian Revolution. So, during the beginning of the Cold War especially, it wasn’t something that was embraced in the US.”

Recently, that has begun to change, as the corporate elite seeks to contain, defuse and divert women’s resistance into system-supporting activities. Bizarrely, the website http://www.internationalwomensday.com/ is sponsored by BP (British Petroleum, responsible for the enormous drilling platform blowout and oil leak in the Gulf of Mexico), Caterpillar (whose bulldozers were used by Israel to kill Rachel Corrie while destroying Palestinian homes), Pepsico (junk food & drink conglomerate), Avon, European Bank for Reconstruction & Development, and MetLife (insurance giant).

On the other hand, this year the call has gone out for a Women’s Strike on March 8 building off the Women’s March on Washington on Jan. 21, when 750,000 gathered in LA, 500,000+ in DC, 400,000 in NYC and huge crowds in the Bay Area and 600 other towns and cities around the US and the world. The strike, supported by Angela Davis nationally and being organized locally by a large coalition, including Global Women’s Strike is aimed at deepening and sharpening women’s resistance to oppression and solidarity with all struggles against oppression and for liberation. National call: httpss://www.womensmarch.com/womensday/ Los Angeles action: https://www.globalwomenstrike.net/content/8th-march-international-womens-day-los-angeles-rock-rap-speakout-vs-poverty-prisons-war 323-276-9833 or la@allwomencount.net

If you enjoyed this post, please consider leaving a comment or subscribing to the RSS feed to have future articles delivered to your feed reader.
By Change-Links|2017-03-05T23:53:09-05:00February 27th, 2017|Uncategorized|0 Comments