This new volume of essays by the noted Indigenous activist and scholar Ward Churchill is, as he noted in his own introduction, about a decade overdue because of  the reactionary and racist attacks on the author and his work when right wing media and academic and political authorities. Churchill was forced to defend himself, his work, his indigeneity, and his career from a belated, manufactured outrage over his use of the term “little Eichmanns” to describe some of the global financiers in the World Trade Center that was brought down on Sept. 11. 2001. (He eventually prevailed in a civil suit he brought after he was dismissed by the trustees of the University of Colorado led by a member of the Coors family). Depriving us of these insightful essays, book reviews, politico-legal analyses and personal memoirs in book form for so long is yet another crime of the system of colonialism and white supremacy, a measure of how threatened that system is by Churchill’s well-reasoned and uncompromising critique of the land theft and genocide that continue to this day. 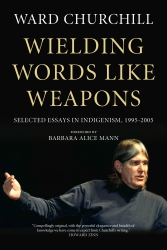 To cite four examples from this nearly-600-page work: In “Subverting the Law of Nations,” Churchill methodically and convincingly uses the legal and diplomatic reasoning and institutions of the United States government itself (in Supreme Court rulings, treaty language and Indian Claims Commission findings well into the 20th Century) to demonstrate the illegality on its own terms of US claims to sovereignty over this land, and the unextinguished nature of “the right of indigenous nations to recover property to which their title remains unclouded, or … their right to recover lands seized without payment…”

In  “Broadening Our View of the Penal Colony, ” his book review of Luana Ross’s Inventing the Savage, Churchill calls attention to her effectiveness in overcoming two weaknesses of much of recent organizing and polemicizing about the prison-industrial complex: “a rather lopsided emphasis on men, and a pronounced tendency to ignore American Indians.” He cites her research into the numbers, where imprisoned Natives are 1/3 of the prisoner population in Alaska, nearly 1/4 in South Dakota, and over 1/6 in North Dakota and Montana; in every case double or triple their share of the general population. In Montana, Native women are 25% of the total female prisoner population. Quoting Ross: “Thus Native women are more likely to be imprisoned than Native men or white women.” Churchill points out the conclusion that Ross draws: The very existence of the US requires an ongoing internal colonization of the indigenous nations upon whose land it has constituted itself.

In “American Indians in Film,” Churchill reviews all the tropes of Hollywood “Indians,” including the most “enlightened” and “progressive” directors, to demonstrate that the notion that the US, or other Western societies built and based on stolen land, are in no way “post-colonial,” and in the process to demonstrate the inadequacies of “post-modernity” and other cultural and political critiques that evade the responsibility to overturn and correct the underlying crimes of this system. In describing his use of such films in his teaching, he also outlines a pedagogy that leads to “not simply an empowering of students to interpret the world more accurately, but to change it.”

In “Kizhiibbinesik/A Bright Star, Burning Briefly”, Churchill writes movingly of the life, destruction and death of his late wife, Leah Renae Kelly, a brilliant, creative writer, painter and film-maker. Alcohol and alcoholism, demonic and overwhelming forms of self-medication for historic, familial and personal trauma, led to her early and tragic death on the cusp of fulfilling some of her creative capacities. Churchill says, “I’ve sought …to draw readers into sharing some facet of my sense of loss … embracing it as their own… What happened to Leah was indeed tragic, but it was no tragedy … it was a crime, an offense against humanity remarkable not in its singularity but because it is so common … and all but universally ignored… Call it, as I have, colonialism. Or, as I also have, call it genocide.”

Other essays in the volume spell out more fully why Churchill rightly calls it genocide, and why colonialism was, and remains a crime. Some may differ with his believe that ultimately, international law can be used as an effective weapon to right these wrongs, but his thinking must be grappled and the profound analyses and carefully documented (and profusely footnoted) research he provides are invaluable. If you can’t afford a copy of your own, get your school, college or public library to buy a few copies. Indigenous Peoples Day would be a good time to start reading it.