By now most of us know what ails Los Angeles. To cite some of the city’s most imminent emergencies:

Climate change barreling down on us in the form of droughts, heat waves, floods, wild fires, and sea level rise.

Unhealthy air and water quality, despite successes in reducing smog.

Land use decisions based on pay-to-play soft-corruption, not LA’s legally adopted zoning, planning, and environmental ordinances.

This list is hardly definitive, but it should make the obvious point. LA is a troubled city at a fateful crossroads, with more fully documented threats than any of us can fully grasp and counter.  This is why Los Angeles desperately needs visionary political leaders who can guide the preparation, implementation, funding, and monitoring of a legally required, comprehensive General Plan.

As this process plods along, it creates a vacuum in the vision that will guide Los Angeles over the next several decades. But not to worry because City Planning has stepped in to fill the vision vacuum that it created. In fact, the new Director of Planning, Vince Bertoni, has dabbled in futurology, telling Los Angeles Magazine about the five major changes that are coming to Los Angeles.

Since these changes are, to be charitable, oblique to the General Plan update process, I share them with you, along with my assessment:

L.A. Magazine: “If you look five, ten years out, you’re going to be seeing more development throughout Los Angeles near our transit stations, our rail lines as the Metropolitan Transportation Authority expands the rail network as a result of Measure M being passed last year…” 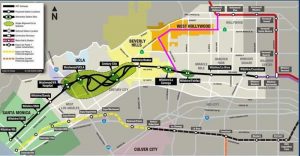 Assessment: When the Director of Planning refers to development, he really means private investment in lucrative real estate projects, and there is no doubt that rail projects are a powerful catalyst for this private investment, much of it from abroad.  In fact, some scholars argue that the revival of depressed real estate, not mobility, is the real agenda behind new urban rail lines, including those in Los Angeles. This outcome, however, has not been left to chance. City Planning’s new Neighborhood Transit Plans ensure that up-zoning to encourage this real estate investment — but not funded infrastructure improvements – will surround Metro’s mass transit stations.

What Mr. Bertoni does not mean by development is long-deferred investment in the city’s infrastructure and service systems. He is not calling for reallocating the City’s budget to pay for tree canopies, bike lanes, sidewalk repairs, code enforcement, undergrounding utilities, better street lighting, ADA curb cuts, and pocket parks and playgrounds that boost rail ridership. Like the City Hall politicians and university academics I have previously drawn over the coals, the LA Magazine vision – to be charitable – is on the same wavelength of private real estate wheeler-dealers.

Their goal is to quickly and profitably build private projects, especially expensive housing near mass transit stations and corridors, then quickly move on to the next luxury building before the down-side becomes apparent. In this case the predictable down-side will be the slow failure of over-burdened infrastructure and public services — until they crumble when the San Andreas or Inglewood or Santa Monica or Whittier Narrows earthquake faults rupture. Meanwhile, the steady release of green house gases from these new projects and their inevitable traffic congestion ensures that climate change can keep pace with the destruction wreaked by major earthquakes.

Driverless cars are already changing the way we build.

L.A. Magazine: “In anticipation of the day when automated vehicles come and there’s less individual car ownership, we’re requiring that if a developer builds parking above ground downtown, they make it so there is the ability to convert that space to residential or office or some other kind of use. So rather than continuous sloping ramps, the space looks like regular building stories that can be converted into floor space.”

Assessment: Driverless and electric cars will, unfortunately, perpetuate an auto-centric Los Angeles.  They still need to be manufactured, sold, refueled, repaired, and junked. They need electricity, most of it generated from fossil fuels. They need freeways, streets, driveways, garages, and parking lots. They require office buildings and shopping centers that are car-oriented, not pedestrian oriented.  And all those new cars will need a place to park, before they leave and once they arrive. They also will not reduce traffic congestion since they supplant non-car transportation modes: transit, walking, and biking.

The real change that will save LA, mass transit that is affordable, reliable, safe, frequent, and tracked by real time phone apps, will be postponed once more. Ditto for upgrades to sidewalks that are smoother, wider, covered with a well-maintained tree canopy, and not subject to visual pollution from overhead electricity and telecommunication wires, illegal commercial signs, and billboards.

Driverless cars will be reshaping our streets, too.

L.A. Magazine: “As automated vehicles become more common, we’ll get this opportunity to rethink the fundamental geometry of the street and think of it as a comprehensive habitat, if you will, that goes from the wall of the building on one side of the street to the wall of the building on the other side of the street and that doesn’t just revolve around the automobile. We’re looking at what it’s like to walk, bicycle, even skateboard down these streets and all the other ways we’ll get around. We’re going to be putting in wider sidewalks, trees, bicycle lanes that people feel protected in. We are looking at these corridors in a very different way than we have in the past.”

Assessment: These right-of-way improvements are absolutely desirable, but they do not depend on driverless cars. Wider sidewalks, trees, and bicycle lanes can and should be added today, not kept at arms length, waiting for new automobile technology. This, in effect, is just another excuse for LA’s continued lack of planning, data collection, and sufficient investment in the public sphere, perpetually short-changing the city’s failing infrastructure and services.

Nevertheless, some of these right-of-way improvements have already appeared in Los Angeles, but with such miniscule funding that they have little cumulative impact. For example, the My Figueroa project includes all of these improvements on Figueroa Street, between 11th Street and Martin Luther King Boulevard.

So far, no one has argued that this amazing prototype should be placed on hold for several decades, until driverless cars take over LA’s streets and City Hall’s officials finally budget the billions necessary to systematically re-engineer the city’s many transportation corridors.

Why this isn’t a Manhattan project

L.A. Magazine: “They don’t have single-family detached homes anymore in New York. We still do. A great challenge is going to be how to maintain the integrity of residential neighborhoods that largely consist of single-family detached homes and still allow for additional density in certain places. We’ve got to be really thoughtful about how we do it—around areas where we have really good transit connections—and make sure we have the right kind of transitions for that.”

Assessment: The reference to Manhattan is just short-hand for increasing the legal intensity and density of single-family neighborhoods in Los Angeles through “granny flats,” basement apartments, and targeted up-zoning. What is missing, unsurprisingly, is any official assessment of the need to expand electricity, water, sanitary sewers and storm drains, street capacity, natural gas, telecommunications, sidewalks, parking places, public transit, emergency services, schools, and parks to serve these additional people and the new structures. While some property owners will applaud these rental units since they can become an Airbnb cash machine, from a city planning perspective it is a highly blinkered view of Los Angeles.

L.A. Magazine: “If you think about displacement, it’s occurring in areas that have no new development happening at all. This is something that impacts lots of parts of the city. We have to be looking at how we increase our housing supply to truly match the needs of the people in the city so there’s a better balance between what people are earning and what their housing costs.” 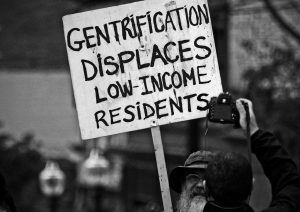 Assessment: Los Angeles is now experiencing another real estate bubble, with many major projects under construction or ready to break ground. This bubble has resulted in the major expansion of commercial space and residential units, but these projects are built for the well-off. They do not, however, directly or even indirectly add more than a few affordable units. Furthermore, some of these new luxury apartment and mixed-used projects are built on the same sites where local residents were recently displaced. And, contrary to the hokum spewed by the real estate sector and its champions, these new expensive residential units do not magically create affordable housing by expanding supply or eventually “trickling down.” In fact, they pull rents up, not down, in surrounding areas, making LA’s housing crisis worse, not better.

As I frequently write at CityWatch, the only way to meet the affordable housing needs of Los Angeles area residents, especially the homeless, the displaced, those living in cars, and those doubling up is to build new public housing through federal, state, and local programs. Market-linked programs will never fill this gap because they treat housing as a commodity, not as a right, like K-12 public schools, that apply to all Angelinos.

Next steps:  Futurology is fun, but this quick inventory of five trends that might impact mid-21st Century Los Angeles ought to be considered in the context of updating LA’s General Plan. Like other trends (e.g., climate change), they need to be carefully tracked. Their implications, especially for the proper funding of municipal infrastructure and services, must be at the heart of any analysis and planning process.

If you enjoyed this post, please consider leaving a comment or subscribing to the RSS feed to have future articles delivered to your feed reader.
By Change-Links|2017-07-28T16:34:40-05:00July 28th, 2017|Banks, Capitalism, Economy, Environment, Homelessness, Justice/Injustice, Labor, Los Angeles Homeowners, Sustainability|0 Comments