WHICH SIDE ARE YOU ON? Why Chris Hedges is Wrong to Equate Antifa with Fascists

Chris Hedges recently wrote that, “Behind the rhetoric of the “alt-right” about white nativism and Christian values is the lust for violence. Behind the rhetoric of antifa and the so-called “alt-left” about capitalism, racism, repression and corporate power is the same lust for violence.” This dangerous  distortion must be challenged. Nobody calls antifa the “alt-left” except Trump and white nationalists. “Alt-right” is a propagandistic self-moniker adopted by Nazis to disguise their racism and white nationalism. Antifa are not motivated by a “lust for violence,” but by a desire to defend themselves and others who are targets of racist, sexist violence, and to disrupt the strategic use of violence by fascists. Fascist talk of “white nativism” is directly related to their roots in the establishment of white ‘nativism’ (an oxymoron) through settler-colonial violence.

Hedges further claims that “the two opposing groups, largely made up of people cast aside by corporate capitalism, have embraced holy war.” This is also false: The fascist forces in Charlottesville were privileged white males, collegians or petty bourgeois intent on proving they’re not just Internet trolls.

Antifa have adopted security culture and physical disruption of fascists, among other, non-violent tactics they use, based on their efficacy on other occasions and in other countries in defeating fascists.

No antifa caused Dylann Roof to get a gun, go to a Black church in South Carolina, and cold-bloodedly execute 9 unarmed women and men at a prayer session. Conversely, I defy Hedges to name a single white racist killed or maimed by any antifa, even in self-defense, let alone an ambush or  assassination. 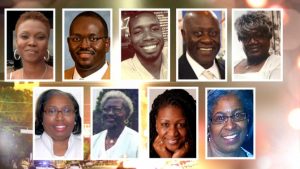 Hedges says fascists and antifa “are separated, as Sigmund Freud wrote, by the “narcissism of minor differences.”” Saying differences between fascists and antifa are ‘minor,’ equates resistance with oppression. Fascists glorify violence as proof of white supremacy. Antifa, whose ranks include people of color, women, Jews, queer and trans people and others targeted by the Nazis are anti-racist. Antifa are practitioners of one approach to dealing with fascism in public spaces and cyber space and they hope others whom they defend will welcome them as such. They’re willing to work with others who have a non-violent approach (but not “peace police” types who in the name of non-violence turn antifa over to the cops).

Hedges blames “a government that’s paralyzed and unable … to address the rudimentary needs of its citizens, [which]  eventually empowers violent extremists.” But the US government is not paralyzed. It’s  an active agent of  repression and enforcer of exploitation. Posing the problem as “extremism,” is part of the false equivalence of the left and right and presumes that an answer will arise from some mythological center.

Outrageously, Hedges states: “Germany’s Nazi storm-troopers had their counterparts in that nation’s communist Alliance of Red Front Fighters. The anti-communist death squad Alliance of Argentina had its counterpart in the guerrilla group the People’s Revolutionary Army during the “Dirty War.” The Farabundo Marti National Liberation Front (FMLN) rebels in El Salvador had their counterparts in the right-wing death squads…“.

You have to ask what Hedges is thinking. What children of military officers orphaned by having their parents killed and dropped into the sea by helicopters were adopted and raised by Argentine leftists? What mass murders of Jewish, Roma, or trade-unionist civilians were carried out by Germany’s Red Front Fighters? What massacres of peasants or assassinations of nuns were carried out by the FMLN? None. Those are the fascists’ crimes against humanity! 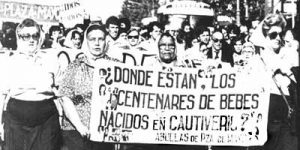 Hedges see police “passivity” as giving antifa a “propaganda victory” by defending Cornel West and other clergy. But law enforcement has never been passive in these situations. Their refusal to protect anti-fascists, protective cordons for fascists, and use of military weaponry and criminalization of protest against the left is routine.

Hedges expresses sympathy for Nazis. “White racists and neo-Nazis may be unsavory, but they too are victims. They too lost jobs and often live in poverty in deindustrialized wastelands. … They too often suffer from police abuse and mass incarceration. And they too have free speech, however repugnant their views.” 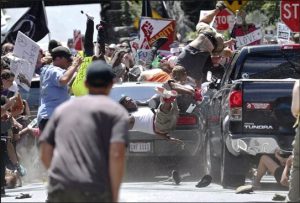 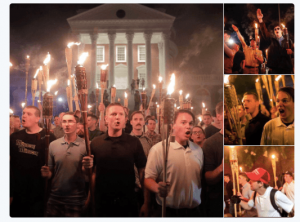 Privileged Nazi collegians demanded, not a living wage, but death to Black people, Jews, Muslims and others.

Neo-Nazis are not just ‘unsavory.’ The sympathetic litany of alleged woes they face reinforces their attempt to cast themselves as victims. None of the expressed concerns of the Nazis speak to any issues he alleges they face. They perceive themselves as victims of feminism and race-mixing, non-existent ‘white genocide.’ Their ‘speech’ is designed to threaten and incite violence against Black people, Mexican@s and other migrants, Jews, Muslims, Asians, women, LGBTQ and disabled people (and Hedges).

Hedges blames antifa for giving the state an excuse for repression. But the state needs no excuses to expand the powers of ‘internal security.’ The same argument has been made against non-violent disruption by Black Lives Matter or Martin Luther King, Jr. 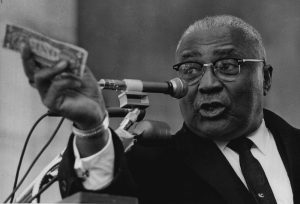 Actually. Rev. Martin Luther King SENIOR was being surveilled by military intelligence while his son was still in diapers.

Hedges says “street violence diverts activists from the far less glamorous building of relationships and alternative institutions that alone will make effective resistance possible,” citing Cooperation Jackson, a grass-roots cooperative movement in Jackson, MS. I support Cooperation Jackson financially and have long been in solidarity with the Malcolm X Grassroots Movement that helped initiate it. MXGM supports armed self-defense against white supremacist violence in the South and elsewhere. They support political prisoners, including freedom-fighters of the Black Liberation Army. MXGM called a demonstration here in LA in 1992 to shut down a forum called by a Black pseudo-nationalist fronting for a group of neo-Nazis and Hitler apologists.

Further, antifa are not engaged in street fighting because it’s in any way ‘glamorous;’ and they engage in unglamorous programs of community gardening, political education, community defense, cop-watching, tenant and labor organizing, etc. (just like Cooperation Jackson).

Hedges quotes Sophia Burns in Catharsis Is Counter-Revolutionary. “Political change doesn’t come from feeling individually validated. It comes from collective action and organization within the working class. That means creating new institutions that meet our needs and defend against oppression.” This is TRUE, BUT IRRELEVANT to his argument. Antifa are not aiming at individual catharsis or validation; they’re building exactly that sort of class-struggle organizing and network.

Hedges believes “protests by the radical left are … self-advertisements for moral purity.” He’s self-righteously projecting his own need for moral purity onto antifa. He says fascists and antifa “represent a clash between the bankruptcy of identity politics, which produced, as Dr. West has said, a president who was a black mascot for Wall Street, and white, Christianized fascism that produced Donald Trump.”

The slogans of ‘Identity politics’ and ‘political correctness’ both originated within sectors of the left resistant to self-criticism, feminism, and the self-determined liberation struggles of colonized people. They were taken up and popularized by George H. W. Bush, right-wing radio and FOX. Corporate liberalism and neo-liberalism, not antifa, are responsible for Obama and Hillary Clinton (and therefore, to a great extent for DJ Chump). Cornel West, incidentally, specifically thanked antifa for saving his life and that of other clergy men and women facing fascist attack in Charlottesville.

Hedges concurs with the Southern Poverty Law Center that it’s best to  not attend a hate rally. This is the “let them eat sheet-cake” argument satirized by Tina Fey. Ignoring racists and giving them unopposed freedom to claim to speak for white people is the worst possible response. 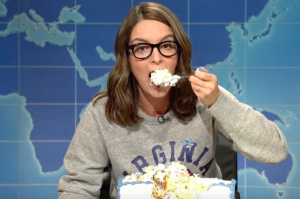 Hedges blames the “unsavory” German Nazis on naivete by the German elite and the efficacy of street brawls in building support for Hitler. Fascism in Germany was built from above and below. Fascism on its path to power was facilitated by big German (and US/UK) capital. Nazis distinguished themselves from other German rightists by their willingness to use extra-legal violence, with an acceptance of this by the German state. Resistance by left and labor forces, who were divided among themselves, was inadequate and demobilized by social-democratic elements willing to participate in parliamentary farces.

Hedges believes the conflict “will not end until the followers of the alt-right and the anti-capitalist left are given a living wage and a voice in how we are governed.” The “alt-right” voice in how we are governed is coming, full-throated, from Donald Trump. And the conflict isn’t caused by the lack of a living wage. The conflict arises out of the irreconcilable contradictions of capitalism itself, and the implacable enmity that exploiters have for the people they exploit and oppress.

Hedges says that “revolt [is] a moral imperative. The question is how to make it succeed. Taking to the street to fight fascists ensures our defeat.” But Hedges offers no strategy as to how revolt, let along revolution, is to begin, or to triumph. Blinded by his own privileges, liberalism and moralizing, he can’t appreciate the agency of the exploited and oppressed, from whom the rulers derive their power and wealth, and thus is a defeatist whose exposes of the system are demoralizing rather than inspiring.

Hedges believes that physically confronting fascists “thrusts the society into a binary demented universe of them and us.” Society is turned into a “binary … of them and us” by colonialism and capitalism, oppression and exploitation. We can recognize the humanity of exploiters, oppressors, and even fascists, and seek to rescue individual members of such groups, but we can’t deny that there’s an irreconcilable contradiction between exploiter and exploited, and that the way to end that contradiction is by ending exploitation and oppression, which will eliminate the exploiters and oppressors AS SUCH. Committing class suicide is the best way for members of the exploiting and oppressing class to save themselves, because exploitation and oppression are parasitic and necrotic, spreading death to others and to the natural world. Exploiters can’t live without those they exploit and oppress. People being exploited can do just fine without exploiters or oppressors.

Hedges concludes that antifa elevate “violence to the highest aesthetic. It’s the prelude to widespread suffering and death. And that, I fear, is where we are headed.” Widespread suffering and death are already with us, and have been at least since Europeans invaded the Western Hemisphere. This is caused, not by an ‘aesthetic of violence,’ but by colonialism and capitalism, land theft, slavery and genocide, all on-going. Despite Hedges fear and pessimism, it will be ended by revolutionary, anti-fascist, anti-capitalist, anti-colonial solidarity, resistance and liberation struggle.

Here’s an authentic Christian pacifist response to antifa in Charlottesville, from one who went there: “I never felt safer than when I was near antifa. They came to defend people, to put their bodies between these armed white supremacists and those of us who could not or would not fight. They protected a lot of people, including clergy. My safety was dependent on their willingness to commit violence. I outsourced the sin of my violence to them. I asked them to get their hands dirty so I could keep mine clean. We cannot claim to be nonviolent when our safety requires another to commit violence, and we ask for that safety.” See httpss://radicaldiscipleship.net/2017/08/23/my-nonviolent-stance-was-met-with-heavily-armed-men/

If you enjoyed this post, please consider leaving a comment or subscribing to the RSS feed to have future articles delivered to your feed reader.
By Change-Links|2017-08-30T18:04:20-05:00August 30th, 2017|Uncategorized|0 Comments