Twenty-First-Century Social Movements and the Activists That Are Transforming Our World
by Greg Jobin-Leeds and AgitArte. NY/London, The New Press, 2016. $17.95
Reviewed by Michael Novick, Anti-Racist Action-LA

This inspiring book looks at the growing social movements of resistance and solidarity of the second decade of the 21st Century, grassroots efforts struggling for social change from below, to make the case for its title. Like the movements it reports on and represents, it integrates artistic and cultural work intimately in its design and content, with photographs, posters, infographics, artist interviews, and cartoons. Chapters focus on the LGBTQ movement, on community-based struggles for public education, on the abolitionist campaign against mass incarceration, on the “Dreamers” and the movement for immigrant rights, on the effort to win economic power, justice and equality, and on defense of the environment, but each section reflects the “intersectionality” that is a buzzword of grassroots political activity today — looking at issues of race in the “queer” community, racist policing in the section on mass incarceration, undocumented queers and the role of the labor movement in the section on immigration, and the role of indigenous people in the environmental struggle for climate justice.
A measure of the fast development and transformational power of these grassroots social movements is the relative lack of focus on Black Lives Matter (though they are named, and there is an interview with Patrisse Cullors-Brignac, one of the three co-founders of Black Lives Matter). The book was obviously several years in development and in collecting and curating the art materials, so that a great deal of what is covered is from roughly 2010-2014. Inevitably, some of the intensity of the Ferguson and Baltimore uprisings is missed, as well as the widespread opposition to racist state violence. The impact of that resistance in the streets and of Black Lives Matter is touched on in Antonio Darden’s “Afterword,” which quotes Malcolm X: ìI believe that there will be ultimately be a clash between the oppressed and those who do the oppressing. I believe that there will be a clash between those who want freedom, justice and equality for everyone and those who want to continue the system of exploitation. I believe that there will be that kind of clash, but I don’t think it will be based on the color of the skin…î Darden, hearkening to her Puerto Rican roots, defines the problem as “racism in a capitalist society,” and elsewhere, organizers are quoted opposing “unregulated capitalism.” The chapter on the environmental struggle, for example, focuses a great deal on Bill McKibben and 350.Org (though there is a lengthy “sidebar” on Environmental Justice 101), but there and elsewhere, some key strategic differences and contradictions that need to be overcome are glossed over. There is not much about the sell-outs by “Big Green,” for example, the corporate-sponsored environmental non-profits and NGOs.
Something else missing from the book, not the fault of the author and contributors, is the peace movement. It is an unfortunate reality that in the period under consideration, roughly corresponding with the Obama administration, the peace movement has given up the ghost. Unfortunately, this also manifests itself with an excessive focus on events and developments within the US. There is a recognition that the climate justice movement is global, and coverage of indigenous struggles around the issue, primarily in Canada. There is strong content about the educational struggles that have been advanced in Puerto Rico. But the chapter on immigration gives a too-quick once-over to the “push” aspects of migration in terms of the conditions of exploitation and repression, and the US role, in the countries people are coming from. 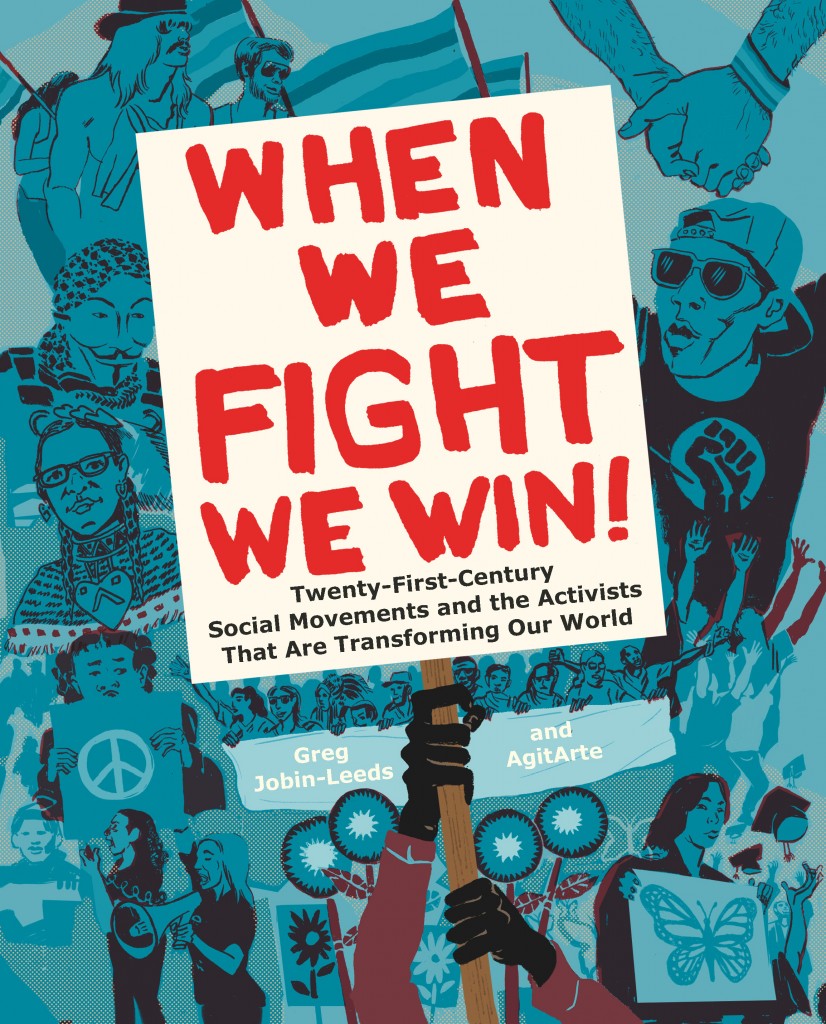 I recommend the book for its breadth, creativity and scope. I fear, however, its title is over-optimistic: there is no guarantee that when we fight, we win. As someone who has been in the struggle for half a century or more, I have seen many losing battles. What is true is that if we don’t fight, we can’t win. The book presents a new generation to a new generation, and seeks to inspire people with a sense of the possibilities, that “resistance is fertile.” But the need to extract lessons from defeats is also an essential part of building a movement that will go all the way, overcome defeatism, and transform society from top to bottom. This will involve not merely confronting but uprooting and overturning capitalism and colonialism, root and branch.

If you enjoyed this post, please consider leaving a comment or subscribing to the RSS feed to have future articles delivered to your feed reader.
By Change-Links|2016-05-07T01:08:56-05:00May 7th, 2016|Book Reviews, Michael Novick|0 Comments