When the State Attacks Journalism 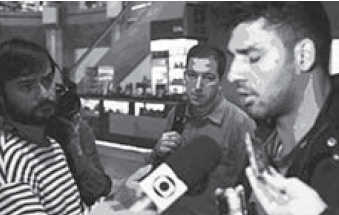 On August 15 Progressive magazine editor Matt Rothschild was arrested at the Wisconsin state capitol building in Wisconsin for the act of reporting on the arrest of a protestor. As he told Democracy Now!

I get out my iPhone and take pictures. I was doing that, and then they were moving Bonnie Block out down a hallway toward an elevator—this is in the Capitol, a public space—and I was following them down there, and I was taking pictures. And they said, “You can’t come here.” And I said, “Well, you know, I’m a reporter. I’m with the Progressive magazine.” They said, “No, you can’t come here.” I said, “I’m with the press. I have a right to be here.” And with that, I didn’t get another word out, because they grabbed my hands, put them behind my back and handcuffed me right then and there.

On August 18 David Miranda, the partner of Guardian reporter Glenn Greenwald, was held at Heathrow Airport for 9 hours under Schedule 7 of the Terrorism Act of 2000. As Greenwald wrote https://www.theguardian.com/commentisfree/2013/aug/18/david-miranda-detained-uk-nsa

The stated purpose of this law, as the name suggests, is to question people about terrorism. The detention power, claims the UK government, is used “to determine whether that person is or has been involved in the commission, preparation or instigation of acts of terrorism.”

But they obviously had zero suspicion that David was associated with a terrorist organization or involved in any terrorist plot. Instead, they spent their time interrogating him about the NSA reporting which Laura Poitras, the Guardian and I are doing, as well [as] the content of the electronic products he was carrying. They completely abused their own terrorism law for reasons having nothing whatsoever to do with terrorism: a potent reminder of how often governments lie when they claim that they need powers to stop “the terrorists”, and how dangerous it is to vest unchecked power with political officials in its name.

Worse, they kept David detained right up until the last minute: for the full 9 hours, something they very rarely do. Only at the last minute did they finally release him. We spent all day – as every hour passed – worried that he would be arrested and charged under a terrorism statute. This was obviously designed to send a message of intimidation to those of us working journalistically on reporting on the NSA and its British counterpart, the GCHQ.

Before letting him go, they seized numerous possessions of his, including his laptop, his cellphone, various video game consoles, DVDs, USB sticks, and other materials. They did not say when they would return any of it, or if they would.

On  https://www.theguardian.com/commentisfree/2013/aug/19/david-miranda-schedule7-danger-reporters August 19, Guardian editor Alan Rusbridger revealed that the British intelligence agency GCHQ destroyed computers at the newspaper’s office in a completely futile attempt to impede their reporting on the National Security Agency:

The mood toughened just over a month ago, when I received a phone call from the centre of government telling me: “You’ve had your fun. Now we want the stuff back.” There followed further meetings with shadowy Whitehall figures. The demand was the same: hand the Snowden material back or destroy it. I explained that we could not research and report on this subject if we complied with this request. The man from Whitehall looked mystified. “You’ve had your debate. There’s no need to write any more.”

During one of these meetings I asked directly whether the government would move to close down the Guardian‘s reporting through a legal route – by going to court to force the surrender of the material on which we were working. The official confirmed that, in the absence of handover or destruction, this was indeed the government’s intention. Prior restraint, near impossible in the US, was now explicitly and imminently on the table in the UK. But my experience over WikiLeaks – the thumb drive and the first amendment – had already prepared me for this moment. I explained to the man from Whitehall about the nature of international collaborations and the way in which, these days, media organisations could take advantage of the most permissive legal environments. Bluntly, we did not have to do our reporting from London. Already most of the NSA stories were being reported and edited out of New York. And had it occurred to him that Greenwald lived in Brazil?

The man was unmoved. And so one of the more bizarre moments in the Guardian‘s long history occurred – with two GCHQ security experts overseeing the destruction of hard drives in the Guardian‘s basement just to make sure there was nothing in the mangled bits of metal which could possibly be of any interest to passing Chinese agents. “We can call off the black helicopters,” joked one as we swept up the remains of a MacBook Pro.

None of these tactics would appear to discourage the journalists who are being targeted. But the stories, taken together, represent a direct attack on news gathering. This should outrage every single journalist, and anyone who believes in freedom of expression.

Peter Hart is the activism director at  https://www.fair.org FAIR (Fairness & Accuracy In Reporting). He writes for FAIR’s magazine   and is also a co-host and producer of FAIR’s syndicated radio show CounterSpin. He is the author of  HYPERLINK https://www.amazon.com/dp/158322601X?tag=commondreams-20/ref=nosim The Oh Really? Factor: Unspinning Fox News Channel’s Bill O’Reilly” (Seven Stories Press, 2003).

If you enjoyed this post, please consider leaving a comment or subscribing to the RSS feed to have future articles delivered to your feed reader.
By John Johnson|2013-09-09T03:46:37-05:00September 9th, 2013|Free Speech, Peter Hart|0 Comments