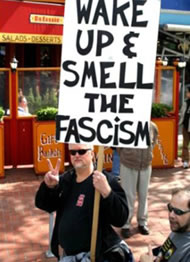 ALEC is not a lobby; it is not a front group. It is much more powerful than that. Through ALEC, behind closed doors, corporations hand state legislators the changes to the law they desire that directly benefit their bottom line. Along with legislators, corporations have membership in ALEC. Corporations sit on all nine ALEC task forces and vote with legislators to approve “model” bills. They have their own corporate governing board which meets jointly with the legislative board. (ALEC says that corporations do not vote on the board.) Corporations fund almost all of ALEC’s operations. Participating legislators, overwhelmingly conservative Republicans, then bring those proposals home and introduce them in statehouses across the land as their own brilliant ideas and important public policy innovations—without disclosing that corporations crafted and voted on the bills. ALEC boasts that it has over 1,000 of these bills introduced by legislative members every year, with one in every five of them enacted into law. ALEC describes itself as a “unique,” “unparalleled” and “unmatched” organization. We agree. It is as if a state legislature had been reconstituted, yet corporations had pushed the people out the door.

More than 98% of ALEC’s revenues come from sources other than legislative dues, such as corporations, corporate trade groups, and corporate foundations. Each corporate member pays an annual fee of between $7,000 and $25,000 a year, and if a corporation participates in any of the nine task forces, additional fees apply, from $2,500 to $10,000 each year. ALEC also receives direct grants from corporations, such as $1.4 million from ExxonMobil from 1998-2009. It has also received grants from some of the biggest foundations funded by corporate CEOs in the country, such as: the Koch family Charles G. Koch Foundation, the Koch-managed Claude R. Lambe Foundation, the Scaife family Allegheny Foundation, the Coors family Castle Rock Foundation, to name a few. Less than 2% of ALEC’s funding comes from “Membership Dues” of $50 per year paid by state legislators, a steeply discounted price that may run afoul of state gift bans.

Is it nonpartisan as claimed?

What goes on behind closed doors?

The organization boasts 2,000 legislative members and 300 or more corporate members. The unelected corporate representatives (often registered lobbyists) sit as equals with elected representatives on nine task forces where they have a “voice and a vote” on model legislation. Corporations on ALEC task forces VOTE on the “model” bills and resolutions, and sit as equals with legislators voting on the ALEC task forces and various working groups. Corporate and legislative governing boards also meet jointly each year. (ALEC says only the legislators have a final say on all model bills. ALEC has previously said that “The policies are debated and voted on by all members. Public and private members vote separately on policy. It is important to note that laws are not passed, debated or adopted during this process and therefor no lobbying takes place. That process is done at the state legislature.”) The long-term representation of Koch Industries on the governing board means that Koch has had influence over an untold number of ALEC bills. Due to the questionable nature of this partnership with corporations, legislators rarely discuss the origins of the model legislation they bring home. Though thousands of ALEC-approved model bills have been publicly introduced across the country, ALEC’s role facilitating the language in the bills and the corporate vote for them is not well known.

(ALEC legislators sometimes compare the organization to the National Conference of State Legislators (NCSL), yet the two organizations could not be more different. NCSL has zero corporate members. It is funded largely by state government appropriations and conference fees; it has a truly bipartisan governance structure, and there is a large role for nonpartisan professional staff; it does not vote on or promote model legislation; meetings are public and so are any agreed upon documents. Corporations do sponsor receptions at NCSL events through a separate foundation. For more information, see the document ALEC & NCSL.)

How do corporations benefit?

Although ALEC claims to take an ideological stance (of supposedly “Jeffersonian principles of free markets, limited government, federalism, and individual liberty”), many of the model bills benefit the corporations whose agents write them, shape them, and/or vote to approve them. These are just a few such measures:

How do legislators benefit?

Why would a legislator be interested in advancing cookie-cutter bills that are corporate give-aways for global firms located outside of their district? ALEC’s appeal rests largely on the fact that legislators receive an all-expenses-paid trip that provides many part-time legislators with vacations that they could not afford on their own, along with the opportunity to rub shoulders with wealthy captains of industry (major prospective out-of-state donors to their political campaigns). For a few hours of work on a task force and a couple of indoctrination sessions by ALEC experts, part-time legislators can bring the whole family to ALEC’s annual convention, work for a few hours, then stay in swank hotels, attend cool parties — even strip clubs— and raise funds for the campaign coffer, all heavily subsidized by the corporate till. In 2009, ALEC spent $251,873 on childcare so mom and dad could have fun.

In most ordinary people’s view, handing bills to legislators so they can introduce them is the very definition of lobbying. ALEC says “no lobbying takes place.” The current chairman of ALEC’s corporate board is W. Preston Baldwin III, until recently a lobbyist and the Vice President of State Government Affairs at UST Inc., a tobacco firm now owned by Altria/Phillip Morris USA. Altria is advancing a very short, specific bill to change the way moist tobacco products (such as fruit flavored “snus”) are taxed– to make it cheaper and more attractive to young tobacco users according to health experts. In fact, 20 of the 24 corporate representatives on ALEC’s “Private Enterprise Board” are lobbyists representing major firms such as Koch Industries, Bayer, GlaxoSmithKline, Wal-Mart and Johnson and Johnson.

ALEC makes old-fashioned lobbying obsolete. Once legislators return to their state with corporate-sponsored ALEC legislation in hand, the legislators themselves become “super-lobbyists” for ALEC’s corporate agenda, cutting out the middleman. Yet ALEC enjoys a 501(c)(3) classification, which allows it to keep its tax-exempt status while accepting grants from foundations, corporations, and other donors. In our view, the activities that corporate members engage in should be considered lobbying by the IRS, and the entity that facilitates that effort to influence state law, ALEC, should also be considered to be engaged predominantly in lobby-related activities, not simply “educational” activities. Re-classifying ALEC as primarily engaged in lobbying facilitation would mean that donations to it would not count as tax-deductible for businesses and foundations. Common Cause filed a complaint with the IRS on July 14, 2011, setting forth evidence supporting its complaint that ALEC is engaged in lobbying despite its claims to do no lobbying.

ALEC’s operating model raises many ethical and legal concerns. Each state has a different set of ethics laws or rules. The presence of lobbyists alone may cause ethics problems for some state legislators. Wisconsin, for instance, generally requires legislators who go to events with registered lobbyists to pay on their own dime, yet in many states, legislators use public funds to attend ALEC meetings. According to one study, $3 million in public funds was spent to attend ALEC meetings in one year. Some legislators use their personal funds and are reimbursed by ALEC. Such “scholarships” may be disclosed if gifts are required to be reported. But should the legislators be allowed to accept this money when lobbyists are present at the meeting? Still other legislators use their campaign funds to go and are again reimbursed by ALEC; in some states, campaign funds are only allowed to be used to attend campaign events.

In short, many state ethics codes might consider the free vacation, steeply discounted membership fees, free day care or travel scholarships to be “gifts” that should be disallowed or disclosed.