What Happens to a Dream Deferred: The Continuing Impact of Dr. Martin Luther King Jr.

What Happens to a Dream Deferred: The Continuing Impact of Dr. Martin Luther King Jr.

After dinner on Sunday, my father turns on the record player… “A Knock at Midnight.” One of the fondest memories of my childhood is listening as my father listened, with his eyes closed, swaying his head to the rhythm of the words of King’s recorded speech. I watched the needle rise and vibrate, crackle on the vinyl. The Rev. Dr. Martin Luther King Jr. birthday holiday is an auspicious occasion. Bittersweet at best, a hero to most, MLK was killed for a cause he believed in deeply. He was killed because the “powers that be” obviously felt “threatened.”

Generation after generation continues to deal with this continued so-called “threat”… the threat of peace, the threat of co-existence, the threat of liberty, hope and happiness for all. Yes, ladies and gentlemen, LOVE is essentially a threat to certain segments of society. And yet, in the face of war, real nuclear threats, famine, genocide, slavery, and all the rest of the ills that plague us, HOPE IS ALIVE.

That was MLK’s dream: Hope. The primary weapon in the fight to overcome the evils of the world. Sadly, oftentimes we can become jaded, cynical, and fall away from the effort, due to the unreal expectation that MLK’s dream can and will quickly or easily become reality. Maybe that has been the Achilles’ heel of the movement.

When we sing “We Shall Overcome Some Day,” those words ring more true than just a dream, because there is an acceptance of no set end to the struggle. For those waiting for MLK’s dream to become reality, please, please, don’t fall away from the struggle due to a false thought that the dream should have become a reality by now.

Or worse, don’t give up on the dream all together!

I was born in the 1970’s. My generation has definitely made an impact for the cause. However, the movement has become more inclusive, so many people, including African Americans, believe that black lives don’t matter much anymore. The cause of African Americans has indeed gotten somewhat lost sometimes in the shuffle of other fights for humanity both domestic and abroad.

For my brothers and sisters of all races, creeds, color and nationality, who ignore, dismiss, or find themselves utterly complacent in the struggle, keep the faith! I highly encourage you to accept the reality that the dream, while deferred, is not denied.

The fight is never ending. Embrace the truth that many battles will be lost. But the final victory in the war is for the ones who persevere to the end. In the end, justice with prevail for all by any means viable.

MLK’s “I Have A Dream” speech is an oratory masterpiece. My wish for this MLK holiday, is that we garner strength from his other speeches as well. Hopefully my favorite, “ A Knock at Midnight,” will be one. 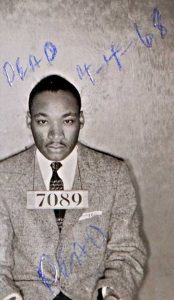 You can see MLK’s “A Knock at Midnight” speech on You Tube at  httpss://www.youtube.com/watch?v=DV7RqizoqJA

If you enjoyed this post, please consider leaving a comment or subscribing to the RSS feed to have future articles delivered to your feed reader.
By Change-Links|2018-01-03T01:55:57-05:00January 3rd, 2018|Anti-Racism/Racism, Commentary, Historical, Human Rights, Justice/Injustice, Movements, Peace|0 Comments