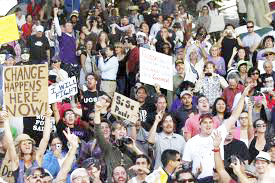 …Get back into your cages, they are telling us. Return to watching the lies, absurdities, trivia and celebrity gossip we feed you in 24-hour cycles on television. Invest your emotional energy in the vast system of popular entertainment. Run up your credit card debt. Pay your loans. Be thankful for the scraps we toss. Chant back to us our phrases about democracy, greatness and freedom. Vote in our rigged political theater. Send your young men and women to fight and die in useless, unwinnable wars that provide corporations with huge profits. Stand by mutely as our bipartisan congressional supercommittee, either through consensus or cynical dysfunction, plunges you into a society without basic social services including unemployment benefits. Pay for the crimes of Wall Street.

The rogues’ gallery of Wall Street crooks, such as Lloyd Blankfein at Goldman Sachs, Howard Milstein at New York Private Bank & Trust, the media tycoon Rupert Murdoch, the Koch brothers and Jamie Dimon at JPMorgan Chase & Co., no doubt think it’s over. They think it is back to the business of harvesting what is left of America to swell their personal and corporate fortunes. But they no longer have any concept of what is happening around them. They are as mystified and clueless about these uprisings as the courtiers at Versailles or in the Forbidden City who never understood until the very end that their world was collapsing. The billionaire mayor of New York, enriched by a deregulated Wall Street, is unable to grasp why people would spend two months sleeping in an open park and marching on banks. He says he understands that the Occupy protests are “cathartic” and “entertaining,” as if demonstrating against the pain of being homeless and unemployed is a form of therapy or diversion, but that it is time to let the adults handle the affairs of state. Democratic and Republican mayors, along with their parties, have sold us out. But for them this is the beginning of the end.

The historian Crane Brinton in his book “Anatomy of a Revolution” laid out the common route to revolution. The preconditions for successful revolution, Brinton argued, are discontent that affects nearly all social classes, widespread feelings of entrapment and despair, unfulfilled expectations, a unified solidarity in opposition to a tiny power elite, a refusal by scholars and thinkers to continue to defend the actions of the ruling class, an inability of government to respond to the basic needs of citizens, a steady loss of will within the power elite itself and defections from the inner circle, a crippling isolation that leaves the power elite without any allies or outside support and, finally, a financial crisis. Our corporate elite, as far as Brinton was concerned, has amply fulfilled these preconditions. But it is Brinton’s next observation that is most worth remembering. Revolutions always begin, he wrote, by making impossible demands that if the government met would mean the end of the old configurations of power. The second stage, the one we have entered now, is the unsuccessful attempt by the power elite to quell the unrest and discontent through physical acts of repression.

…The process of defection among the ruling class and security forces is slow and often imperceptible. These defections are advanced through a rigid adherence to nonviolence, a refusal to respond to police provocation and a verbal respect for the blue-uniformed police, no matter how awful they can be while wading into a crowd and using batons as battering rams against human bodies. The resignations of Oakland Mayor Jean Quan’s deputy, Sharon Cornu, and the mayor’s legal adviser and longtime friend, Dan Siegel, in protest over the clearing of the Oakland encampment are some of the first cracks in the edifice. “Support Occupy Oakland, not the 1% and its government facilitators,” Siegel tweeted after his resignation.