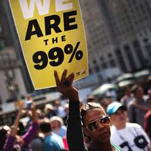 Being part of the 99% isn’t about dominance – it’s about universality.

The struggling economy is impacting everyone. Well, almost everyone. Americans on the whole aren’t getting ahead; they’re falling further behind every year. Nearly every American is worried about paying his bills or keeping her job. The terrible economy of 2008 has become the still-horrible economy of 2011.

We’ve worked and waited for change, for the system to improve, for the reasons the economy got broken to be fixed.

Washington isn’t making our economy better. Politicians aren’t. Oil and gas companies aren’t. Wall Street isn’t. They aren’t making the economy better because the economy doesn’t impact them. The Senators who voted against the jobs bill aren’t unemployed or struggling to pay their bills. The heads of ExxonMobil and Goldman Sachs aren’t either. And they aren’t holding each other accountable.

The protests throughout the country are.

Loud, peaceful protest is making America pay attention to the discrepancies and weak spots in our economy. It’s something we’ve been saying pointedly and politely for nearly five years. But it’s something that needs to be said more loudly.

To our supporters: join the conversation today. Bring your voice and your issues to your local Occupy assemblies. Go. March. Make signs. Protest. Stand up for what you believe in.

To the people Occupying America – young and old; black, brown and white: We add our voice to your calls for change.

Phaedra Ellis-Lamkins is the Chief Executive Officer of Green For