We Are All Occupiers

We Are All Occupiers 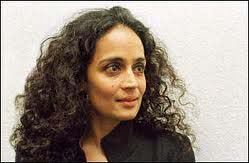 This is the text of a speech given by Arundhati Roy at the People’s University in Washington Square, NYC on November 16th, 2011.

Tuesday morning, the police cleared Zuccotti Park, but today the people are back. The police should know that this protest is not a battle for territory. We’re not fighting for the right to occupy a park here or there. We are fighting for justice. Justice, not just for the people of the United States, but for everybody.

What you have achieved since September 17th, when the Occupy movement began in the United States, is to introduce a new imagination, a new political language into the heart of empire. You have reintroduced the right to dream into a system that tried to turn everybody into zombies mesmerized into equating mindless consumerism with happiness and fulfillment.

As a writer, let me tell you, this is an immense achievement. And I cannot thank you enough.

We were talking about justice. Today, as we speak, the army of the United States is waging a war of occupation in Iraq and Afghanistan. US drones are killing civilians in Pakistan and beyond. Tens of thousands of US troops and death squads are moving into Africa. If spending trillions of dollars of your money to administer occupations in Iraq and Afghanistan is not enough, a war against Iran is being talked up.

Ever since the Great Depression, the manufacture of weapons and the export of war have been key ways in which the United States has stimulated its economy. Just recently, under President Obama, the United States made a $60 billion arms deal with Saudi Arabia – moderate Muslims, right? It hopes to sell thousands of bunker busters to the UAE. It has sold $5 billion-worth of military aircraft to my country, India, which has more poor people than all the poorest countries of Africa put together. All these wars, from the bombing of Hiroshima and Nagasaki to Vietnam, Korea, Latin America, have claimed millions of lives – all of them fought to secure the “American way of life”.

Today, we know that the “American way of life” – the model that the rest of the world is meant to aspire towards – has resulted in 400 people owning the wealth of half of the population of the United States. It has meant thousands of people being turned out of their homes and their jobs while the US government bailed out banks and corporations – American International Group (AIG) alone was given $182 billion.

The Indian government worships US economic policy. As a result of 20 years of the free market economy, today, 100 of India’s richest people own assets worth one-quarter of the country’s GDP while more than 80% of the people live on less than 50 cents a day; 250,000 farmers, driven into a spiral of death, have committed suicide. We call this progress, and now think of ourselves as a superpower. Like you, we are well-qualified: we have nuclear bombs and obscene inequality.

The good news is that people have had enough and are not going to take it any more. The Occupy movement has joined thousands of other resistance movements all over the world in which the poorest of people are standing up and stopping the richest corporations in their tracks. Few of us dreamed that we would see you, the people of the United States on our side, trying to do this in the heart of Empire. I don’t know how to communicate the enormity of what this means.

They (the 1%) say that we don’t have demands… perhaps they don’t know, that our anger alone would be enough to destroy them. But here are some things – a few “pre-revolutionary” thoughts I had – for us to think about together:

We want to put a lid on this system that manufactures inequality. We want to put a cap on the unfettered accumulation of wealth and property by individuals as well as corporations. As “cap-ists” and “lid-ites”, we demand:

• Three, everybody must have the right to shelter, education and healthcare.

• Four, the children of the rich cannot inherit their parents’ wealth.

This struggle has re-awakened our imagination. Somewhere along the way, capitalism reduced the idea of justice to mean just “human rights”, and the idea of dreaming of equality became blasphemous. We are not fighting to just tinker with reforming a system that needs to be replaced.

As a cap-ist and a lid-ite, I salute your struggle.