Walk a Mile in My Shoes Civil Rights Memorial

Communities in Los Angeles are celebrating the civil rights revolution with public art and green space: A new parks project, called “Walk a Mile in My Shoes,” commemorates the movement by honoring local and national heroes. The civil rights park transforms two traffic islands one mile apart from each other. The space evokes the March on Washington for Jobs and Freedom in 1963, and the March on Selma that led to the Voting Rights Act of 1965. The traffic island in the Baldwin Hills in African-American Los Angeles on Rodeo Drive and Martin Luther King Boulevard focuses on national heroes of the Civil Rights Movement, while the island a mile away on Rodeo and Jefferson Boulevard focuses on local heroes. The “Walk a Mile” project is inspired in part by the National Park Service’s International Civil Rights Walk of Fame. Los Angeles celebrated the ribbon-cutting for the project—the only monument in the city dedicated to the Civil Rights Movement—on June 26, 2014.

More than symbolic, the civil rights park is itself the result of the successful civil rights and environmental justice struggle for clean water justice and green access in African-American and Latino Los Angeles. The Baldwin Hills and South Central Los Angeles are the historic heart of African-American Los Angeles. These communities have long strived for equal access to public resources, including parks, recreation and public art. These communities have struggled to be free of environmental degradation, including sewage odors and overflows, and the risks of urban oil fields. Although Baldwin Hills may be comparatively well-off financially, it is plagued by the inequality and environmental injustice common to South Central and other communities that are of color or low-income. “Walk a Mile in My Shoes” reflects the community struggle for both: freedom to enjoy the benefits of green space, and freedom from the risks of sewer odors, spills and oil fields.

The project is the result of an epic 40-year community struggle to fix the sewer system citywide, and eliminate noxious odors that plagued African-American and Latino communities for decades. The odors smell like rotten eggs and are caused by hydrogen sulfide escaping from the sewers. Community leaders working with civil rights lawyers and the United States Environmental Protection Agency (EPA) reached a $2 billion court-ordered consent decree and agreement with the City of Los Angeles to settle a lawsuit under the Clean Water Act. Civil rights attorneys intervened in the action to fully represent the interests of the affected community. This was the first time the Clean Water Act was used to address sewage odors, separate from overflows. The Los Angeles sewer system is one of the largest in the U.S., making this work significant to the nation well beyond Southern California. This is one of the largest sewage cases in U.S. history, according to EPA. Experts from around the world visit Los Angeles to learn how the city has fixed up the sewer system, spills and odors.

The settlement agreement calls for multi-benefit city green and blue park and water projects to improve the sewer system citywide, clean up sewer odors, and create park, creek and wetland projects to improve water quality and quality of life. These supplemental environmental projects are part of the settlement agreement. The SEP projects include the South Central L.A. Wetlands Park, which transformed a bus parking lot into green space; the North Atwater Creek Park, which has helped kick off the revitalization of the L.A. River; and the Garvanza Park Stormwater project in Highland Park, which captures and cleans one million gallons of rain and runoff with cisterns under the park that filter and replenish groundwater, irrigate the park, and keep polluted runoff out of the L.A. River and the ocean. 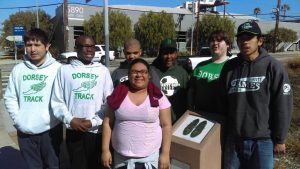 These green and blue projects directly benefit the community along the River and in Baldwin Hills, South Central Los Angeles, Northeast L.A. and beyond. The civil rights art project by artist Kim Abeles enhances those communities and the city as a whole.

Diverse allies helped fix the sewer system citywide to eliminate noxious odors and create park and clean water projects through the Clean Water Justice agreement. Allies include Baldwin Hills/Crenshaw Homeowners’ Coalition, Baldwin Hills Estate Homeowners Association (HOA), Baldwin Hills Village Gardens Homes HOA, Concerned Citizens of South Central Los Angeles, Crenshaw Neighborhoods HOA, Expo Neighbors Block Club, United HOA, Village Green Homes HOA, and civil rights attorneys at The City Project and English, Munger, and Rice. More broadly, Concerned Citizens of South Central Los Angeles, represented by The City Project and diverse allies, have fought for over a decade to protect the community and the Baldwin Hills Park, the largest urban park designed in the U.S. in a century. They have stopped a power plant in the park, stopped a garbage dump there, and saved the Baldwin Hills Conservancy. They have fought in and out of court to regulate the adjoining Baldwin Hills oil fields to better protect human health and the environment, in an action separate from the Clean Water Justice case. According to the County of Los Angeles, as a result of that settlement agreement, the Baldwin Hills is the most heavily regulated oil field in the nation.

With the ribbon-cutting for “Walk a Mile in My Shoes,” the Clean Water Justice consent decree came to an end after ten years. The City’s Bureau of Sanitation, the members of the Baldwin Hills/Crenshaw Homeowners’ Coalition, and The City Project have agreed to continue working together voluntarily to keep the community clean and green. The City and the people have learned to listen to each other, and to work together. That is a testament to the transformative power of the Civil Rights Movement.

Equal Justice, Democracy, and Livability for All

If you enjoyed this post, please consider leaving a comment or subscribing to the RSS feed to have future articles delivered to your feed reader.
By Change-Links|2016-11-06T16:55:42-05:00November 6th, 2016|Anti-Racism/Racism, Ecology, Justice/Injustice, Los Angeles|0 Comments