US voters are often compartmentalized into groups: Democrats vs. Republicans; liberals vs. conservatives; alt right vs. progressives; and so on. For attempting to understand how average voters relate to our current presidential race, a better analysis could be seeing voters as either 1)benefiting or 2)not benefiting from our current state of affairs. Those benefiting are doing really well or just managing to get by.  Those not benefiting are totally disenfranchised and marginalized or seeing their capacity to have basic needs met increasingly abandoned, and are suffering as a result. Some of those benefiting are drawn to Hillary – some of those not benefitting to Trump.

Donald J. Trump has only done one thing right. He’s pointed out that our government and cultural systems are corrupt and broken. Yet he participates in and embodies this corruption, and offers no realistic remedy to our collective predicament. He’d make matters worse if elected President because he’s a racist, bully, misogynist, serial liar, narcissist, and sociopath who has thrown thousands of working people under the bus as part of his business to increase his millions in profit.

What would the US under a “law and order” Trump Presidency look like? Arun Gupta muses on “the likelihood Trump may win … Black Lives Matter will be declared a domestic terrorist outfit …

Trump and Attorney General Giuliani would relish using the National Guard to crush blockades of oil pipelines and indigenous people defending their lands. There’ll be no more climate justice movement or hesitant steps toward limiting climate change. An English-only law would likely be passed, DACA withdrawn. There’d be an all-out assault on reproductive rights. Gains at the National Labor Relations Board will be overturned. Huge swaths of the West will be turned over to [extractive] industries. Tens of millions would go from inadequate healthcare to none. The Alt Right will disrupt the left. Voter suppression becomes the norm. There’ll be organized violence, perhaps mini-pogroms, against Muslim and Mexican communities…” (Common Dreams)

A nightmare. On the other hand, Hillary Clinton must be recognized as no better — a lying neoliberal, a neo-con warmonger, and “the poster child for what’s wrong with Washington.” A pillar of the Democratic Party Establishment, “hands on” First Lady, Senator and Secretary of State, she was responsible for many disasters of a US government controlled by the 1%.

Why? Pillory is not an individual, but a representative of the ruling class aligned to the Democratic Party Establishment. She and Bill have been consolidating power and wealth for decades, soliciting hundreds of millions from the Financial Industry, Big Oil, the Weapons Industry, the Prison Industrial Complex, etc.).

The corrupt government under their reign, exposed by Sanders and Trump, has perpetuated exploitation of US citizens and the world. The government has undertaken: off-shoring jobs and manufacturing through “free-trade” deals to benefit their masters, the 1%; policies leading to the worldwide collapse of the financial industry in 2007-2008 through deregulation, when millions were cheated out of their savings, homes, pensions, and livelihoods; bailing out Wall Street to the tune of 17 trillion dollars; waging endless wars that have killed millions worldwide; covertly destroying elected governments that didn’t adhere to US interests; polluting waters, our atmosphere, and Mother Earth; disproportionately incarcerating men and women of color; undermining the electoral process by unreasonable restrictions on participation in presidential debates, purging voter registration rolls, using Citizens United Superpacs; defunding public services including education, infrastructure, health care, and much, much more.

These existing travesties haven’t been orchestrated by Trump, but by the 1% that Hillary serves, just like the Republicans. Hillary (as a mover-shaker for the Democrats), the Republican Party, and the 1% of the super rich are responsible for all the above. A vote for Hillary is a vote for more of the same.

Many Hillary supporters aren’t too bothered by US shortcomings. Inequities and injustices are normalized. Issues of war and conditions like homelessness are rarely mentioned during debates or in the media. “Clintonites” have some concerns (gun control, etc.), but the life and death issues listed above aren’t prominent in their personal lives, and they advocate addressing them through the status quo, because they don’t see the status quo as inherently flawed and causing such problems.

Our governing and electoral mechanisms are part of the problem. As Trump observes, they are rigged. The media and the electoral spectacle make people think we have a democracy (rule by the people), but that’s only appearance. We have oligarchy (rule by the dominant class), plutocracy (rule by the wealthy), and kakistocracy (rule by the worst persons). Hillary represents this as much as Trump– she’s bought and sold by the 1% and does their bidding.  She and her associates are in large part responsible for the mess the world is in. Many average voters lament that out of 330,000,000 people these two are the choice for president. 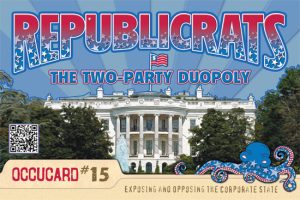 The Occupy movement noted that “the two-party duopoly describe[s] the political system in the US, in which two political parties dominate government while holding virtually identical positions on most economic and foreign policy issues. Funded by the same corporate interests, they’re sometimes referred to as “Republicrats” because they resemble two wings of a single party whose policies benefit large corporations and the super rich (despite holding different positions on cultural issues in which corporations have little or no interest).… the two-party system lends itself to corporate manipulation. …  By funding candidates from both parties  …corporations purchase loyalty, [and] prevent either party from obtaining a continuous, popular majority that might challenge corporate interests. Also, the culture wars between ‘liberal’ and ‘conservative’ value systems divide the voters between the two parties by providing them with real yet economically insignificant reasons to prefer one over the other …Their function is to divide the citizenry while obscuring class differences and diverting attention from the social and economic concerns of the general populace.” (Occucards: Republicracts)

The Clintons have repeatedly created conditions (war without end, financial bubbles, poverty, incarceration, increased global warming) that have harmed working people in the US and elsewhere while increasing the profits of the rich, who fund both major parties equally:

The politicos ignore the plutocratic, racist, ecocidal, sexist, repressive and military-imperial havoc that Democrats inflict at home and abroad in dark, co-dependent alliance with the ever more radically reactionary Republicans. Democrats fail to acknowledge their … “dismal” Dems’ neoliberal abandonment of the nation’s working-class majority in service to transnational Wall Street and corporate America. (Truthdig)

This is what the duopoly offers.  Hillary is its queen, and she may soon be crowned. There has never been a stronger case for the need of independent third party politics in the US.

If you enjoyed this post, please consider leaving a comment or subscribing to the RSS feed to have future articles delivered to your feed reader.
By Change-Links|2016-11-06T17:02:34-05:00November 6th, 2016|California, Capitalism, Democracy, Donald Trump, National Security, Obama, Politics|0 Comments