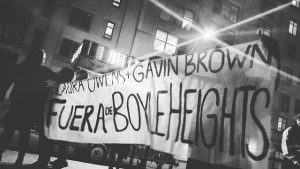 Although the politics, tactics, and people committed to the fight against gentrification, displacement, and art-washing differ, what binds us is a commitment and dedication to the most marginalized and oppressed people in our ‘hoods. We happily announce that Defend Boyle Heights is getting stronger: our coalition is growing and we are disciplining ourselves toward more active solidarity. We understand that as a small groups of ants we are not so strong but an army of ants we can move mountains. In only two short years our victories continue stacking in our favor. Chimento Contemporary is leaving Boyle Heights. United Talent Agency is leaving Boyle Heights. Venus Over Los Angeles  snuck out of Boyle Heights almost completely unnoticed. We see gallery doors closing left and right, as they should! We still saying GTFO! to those coming at us with “symbolic”, compromising, or appropriating bullshit for our struggle.

The victories are predicated upon our solidarity with those who laid the groundwork for the fight against displacement in Boyle Heights. To this day these women, mothers, and family members continue serving their ‘hood under Union de Vecinos and the Pico Gardens – Resident Advisory Council. Without their experience and visionary mindset, Defend Boyle Heights’ campaigns would have been, at most, unguided. We are thus blessed with the opportunity to work with them collectively against gentrification, artwashing, capitalism, and the state.

These women teach us we are all targeted, we are all under attack, if you come from any hood in Los Angeles. The fight to defend our ‘hoods is a fight for our collective survival. We wish to thrive beyond our wildest dreams but dreams are almost illegal in the ghetto when you must dedicate all extra time to figuring out new ways to defend your basic living. We don’t dream of using mommy’s money to purchase a warehouse for $700,000 like MaRS’ owner Robert Z. Stark because our families’ realities are two jobs and sleep for dinner. As we go into three years of this fight, we cheer onward the organizations and people across Los Angeles dedicating themselves to fighting gentrification militantly and without compromise. We have a clear understanding of the tactics that worked which we shall continue to use. We will continue building bridges between DBH, NELA locals ready to build power against the erasure of their barrio, South Central renters  building people power against landlords, and other organizations.

On this note, we welcome RASH (Red and Anarchist SkinHeads) into the Defend Boyle Heights coalition. The following text is a statement presented by the organization:

RASH: Red & Anarchist Skinheads- Los Angeles: “RASH being a subcultural group that exists in the community consisting of working class youth. Our aim is to create political spaces and bring revolutionary politics to the youth. Because the majority of members live in East l.a. and BH it is important to work alongside collectives and orgs doing important work.

We uphold the true proletarian spirit of skinhead which consists of multicultural struggles, the creation and fomenting of our own culture (music & art) and the use of our experiences to showcase working class culture from our hood to other corners of the world.

As red skinheads, it’s our responsibility to break away from the reactionary behavior related to the broader skinhead scene.”

Defend NorthEast LA: we see you!

It’s never “too late” to fight the forces of gentrification. Defend Boyle Heights is playing a big sister role to many community members and organizations who are interested in adapting to the same analysis and tactics of our own coalition. It is our obligation to handle solidarity work with all and any hoods who recognize the analysis and tactics of DBH, choose to mobilize and fight back with direct action, and make sure all moves are being made by the ‘hood for the hood. We look forward to fighting shoulder to shoulder and hood to hood against the violent process of gentrification.

We leave you with a few words from Defend NorthEast LA:   Defend Northeast Los Angeles is a coalition of NELA Organizations committed in fighting gentrification. Our goal is to stop the rapid displacement of our people and our businesses. Our vision is to unite all communities affected by gentrification.