Veterans For Peace calls for a reduction in the Pentagon budget and an increase in spending to meet human needs at home and abroad. As military veterans from WWII to the current era of conflicts, who have trained for, and in many cases, fought in U.S. wars, we know that current US policies have not only failed to bring peace but are morally bankrupt. Veterans For Peace has called for a different approach than war to demonstrate power and strength and prevent and end violent conflict. For 32 years, we’ve called for the abolition of war as an instrument of national policy. The US has witnessed the failure and blowback of war many times, including when the government chose to respond to the tragic and depraved violence of the September 11, 2001 attacks with more violence by invading Afghanistan. The U.S. went on to invade Iraq, overthrow the government in Libya and drop bombs in Syria, Yemen, Somalia and other nations. An Oct. 16, 2016 NY Times article states, “This year alone, the US has carried out airstrikes in seven countries and conducted Special Operations missions in many more.”

The President plans to increase Pentagon spending by $54 billion, claiming the military is broken and depleted. Trump recently spoke to service members aboard the new $13 billion USS Gerald R. Ford aircraft carrier reiterating his call for more spending. Ironically the carrier is a real-life example of why more spending isn’t needed. US military capabilities outstrip all other nations. 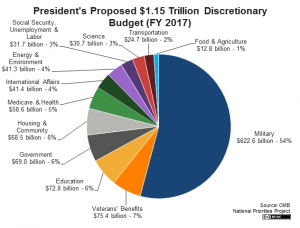 The carrier is an addition to a navy that  was already unmatched. With ten carriers, the US has more than all other nations combined <https://nationalinterest.org/feature/the-five-most-powerful-navies-the-planet-10610>  and the carriers are larger, providing more deck space per carrier than other nations. The US Navy has thousands of aircraft, making it the second largest air force in the world behind the US Air Force. The US spends almost three times what any other country spends on defense and more than the next nine countries combined.

As citizens, it’s our responsibility to ask, with this massive military capability and spending and endless global wars costing trillions, why are 15 years of war policy not working? Who is benefiting from more spending on killing and death?

The President has called for an escalation of war against ISIL, stating, “I directed the Department of Defense to develop a plan to demolish and destroy ISIS…” This long-standing policy of militaristic responses to stop terrorism is further evidence that the US is operating according to a worldview of permanent war.

One part of our mission at Veterans For Peace is to end the arms race and to reduce and eventually eliminate nuclear weapons. We are deeply concerned about recent statements and developments. The President seeks to increase tensions with Iran by threatening to pull out of the nuclear agreement between Iran and the P 5+1 – U.S., UK, France, China and Russia plus Germany. Mr. Trump has also called for what many have termed a new nuclear arms race. This is frightening and the Democratic Party’s relentless anti- Russian rhetoric is irresponsible. The world doesn’t need a new arms race or rising tensions between the US and Russia. In fact, the world must rid itself of these immoral weapons before they are used again, and Russia and the US must find peaceful means to address the spread of global violence. There is no real defense against a nuclear strike and a new build up will only bring the world closer to the possibility of nuclear war resulting in millions if not billions of deaths.

We call on the President to learn from the past 15 years and step out on a new direction of peace.

If the President can’t learn from past failures, perhaps he can learn from success. The Iran agreement is a milestone in diplomacy that averted a war and met all parties’ concerns about Iran’s nuclear power program. Working with Russia in Syria, President Obama secured an agreement where the Syrian government willingly gave up its stockpile of mustard gas and nerve agents, a task that was completed in the summer of 2014. Syria also signed the international Chemical Weapons Convention. Diplomacy can work. Peace is possible, but we must work for it.

US efforts have proven that war is the breeding ground for more violence and hatred. We need increased spending in social programs here at home, including significant resources dedicated to our veterans who are suffering devastating effects as a result of their service. We need an increase in diplomacy to end the wars. We need to dedicate resources to helping bring relief to the refugee crisis resulting from endless war.

We, as veterans, know that peace is possible, but only if resources are directed towards caring for one another, not perpetuating militarization across the globe.

Sign the United for Peace and Justice petition to call for funds to be spent on human needs here at home, not military and war-making abroad. Sign the petition: https://peacepledge.unitedforpeace.org/trumps-military-budget/

If you enjoyed this post, please consider leaving a comment or subscribing to the RSS feed to have future articles delivered to your feed reader.
By Change-Links|2017-03-30T23:30:16-05:00March 30th, 2017|Afghanistan, Heroes and Whistleblowers, Iraq, Peace, Peace and War, Peace Vigils, Politics, Veterans|0 Comments