Want to Know How “Vegan” Each State Is?

Our latest research into veganism in America has revealed a surprising link between politics and how vegan-friendly individual States are.

Our research team was collecting data from all 50 states to come up with a definitive list of the most vegan states of 2021. And we started noticing that those states with the largest interest in becoming vegan and the availability of vegan restaurants seemed to be Democrat states.

In fact, only one single state in the top 10 list went to Trump in the last presidential election.

But it gets even more surprising when you look at the full list of states.

How Did We Rate Each State?

Our research approach focused on four indicators that we measured for every state, and with that complete data set, we could then rank all 50 states.

And then we checked whether each state was red or blue in the last election.

To assess the vegan population of a state, we looked at online search trends published by Google.

We measured the average monthly search volume for the phrase “vegan restaurants” for each state, as this is the clearest indication of how interested the local population is in vegan dining.

The final step in this research involved weighing the search volume of each state on a per 1 million people basis to achieve a data set that allowed for clear comparison and ranking.

The second most important data point in this research involved gathering details about the total number of dedicated vegan restaurants in each state.

Our team approached this using online resources to gather details from Google Maps, HappyCow.com, and Yelp.com.

The critical part of this research was that we strictly focused on vegan restaurants and excluded vegetarian ones where we would have had to make subjective decisions about how vegan each restaurant was.

Weighing the number of restaurants against the population provided a clear objective ranking.

The third part of our research data looked at how many vegan meetup groups are registered in every state to gauge how active the vegan population is in promoting this lifestyle.

We were able to quantify this data by using online resources at Meetup.com and Google search, which proved to be the most reliable sources.

In order to be able to compare states of different sizes, we also weighted the data per 1 million people.

And finally, we looked at how many animal welfare groups were registered in each state as an indicator of people’s support for animal rights.

Google Maps proved to have the most reliable information about animal welfare groups and shelters.

The final step was again to weigh this number per 1 million people to make a comparison between states possible.

We looked at a map of the U.S. with the 2020 presidential election results, and it became clearly obvious that a state’s political leaning is an excellent predictor of how “vegan” it is. 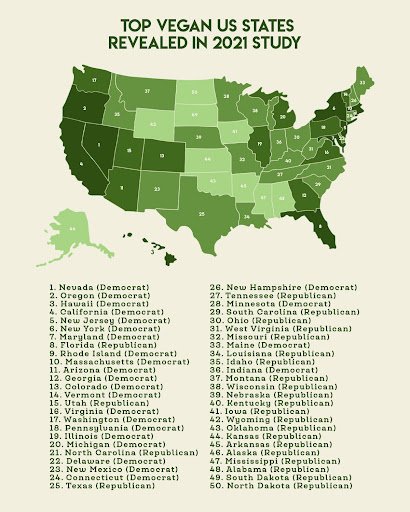 The Top 10 Vegan States in America

The most significant driving factor for Nevada achieving the top ranking came down to very strong growth in search traffic among the local population. And once we added a fourth-place ranking for the number of vegan dining options, we got data that put Nevada marginally ahead of California.

Oregon has a solid ranking in the top 3 for search volume, but it was the third-place ranking for vegan restaurants that pushed it up into the overall second place.

The one area where there seems to be the most opportunity to gain some rankings is through organized meetup groups.

The data point that stood out the most for Hawaii is the density of restaurants. It seems like both locals and people vacationing on the islands have a significant demand for vegan dining experiences.

Combined with the fourth-place finish for the number of people using vegan search terms, the data supported a strong overall ranking.

With a slightly lower search volume, and number of vegan restaurants per 1 million people than Hawaii, California still ranks very high with a growing trend in both data sets.

It’s also a state that has a lot to offer vegans who want to grow their circle of vegan friends through organized meetup groups.

What stands out the most for New Jersey is that despite only ranking in 14th place for local search trends, it’s the highest-ranked state for the selection of vegan restaurants.

With 29 vegan dining choices per 1 million people, New Jersey is well ahead of second-place Hawaii with 19 restaurants.

One thing we noted during our research is that NYC has the highest density of vegan restaurants. However, that density doesn’t continue throughout the state.

The strong overall search trends have supported a top 10 finish for NY, and there are many active meetup groups to find more like-minded people.

Maryland made it to the top 10 due to good supporting search trends and choice of restaurants. It stands out on this list, especially when you consider the small population size.

We also found that it’s one of the better places to get involved with meetup groups and animal rights support.

The one thing that stands out the most about Florida is that there is quite a lot of interest in veganism, but the state only came in 15th place for the number of vegan restaurants.

It also seems like the only top 10 state to go to Trump doesn’t have a large number of meetup or animal welfare groups.

Yes, this tiny East coast state has made it into the top 10 list this year through a significant growth in vegan population. There still seems to be a bit of a lack of restaurants, and that could be a huge opportunity for anyone looking for a new place to open a vegan restaurant.

Massachusetts is one of the top-ranking states for the selection of dedicated vegan restaurants, but it only ranks in 17th place for Google searches.

Massachusetts also ranks very high when it comes to animal welfare activity and meetup groups throughout the state.

What Does Population Size Say About Vegan-Friendliness?

Another thing that stood out during our research was the population size of each state in the top 10. We had expected to see both a larger vegan population and restaurant density in states that also had the largest population size.

But such a correlation doesn’t exist.

If there’s anything this data shows is that average size states seem to be closer to the top.

And that reveals an opportunity when you factor in the number of restaurants.

Are You Ready To Make Your State More Vegan?

As we’re coming into the new year, it’s time to become proactive about making healthy diet changes. And the worst thing you can do is wake up on the first of January with an ambition to become vegan and no idea where to start.

Whether you’re a Republican or Democrat voter, or you’re not all that interested in politics, becoming a vegan is all about making a decision to be and live a more healthy life.

And if you’re interested to see if the midterm elections next year provide us with the same predictive results, then watch out for our research planned for immediately after those results are in.

If you enjoyed this post, please consider leaving a comment or subscribing to the RSS feed to have future articles delivered to your feed reader.
By Change-Links|2022-02-01T16:18:51-05:00February 1st, 2022|Biden, Donald Trump, Elections, Food, Health, Health, News, Politics|0 Comments