A pro-Trump “MAGA” (Make America Great Again) rally in Huntington Beach erupted into violence on March 25 when a Trump supporter attacked photographers and a reporter for the OC Weekly, screaming “Fake News!”, a counter-demonstrator responded with pepper-spray that hit one of the pro-Trump rally organizers, and a melee ensued, in which police of course arrested a counter-protester who had been hit repeatedly with a flag staff by one of the Trump supporters. Gustavo Arellano of the OC Weekly (and KPFK) denounced the attack on the paper’s staff and attributed to violence to aggression of the Trump supporters. There was coverage by local media: https://www.latimes.com/local/lanow/la-me-ln-trump-rally-20170326-story.html

I had attended the counter-demonstration earlier for about an hour, when it had been quiet and uneventful, and we left to return to the OC Anarchist Book Fair. About two dozen people with signs and a loudspeaker chanted while a much larger throng of Trump supporters had promenaded by on their way to a picnic MAGA rally in Bolsa Chica, waving US flags and Trump banners. There had been reports of an organized presence at the OC MAGA rally by “Soldiers of Odin,” a white supremacist gang, but they were not evident. 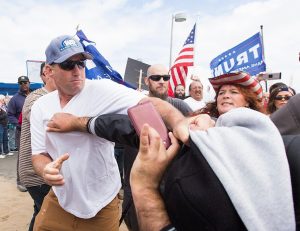 If you enjoyed this post, please consider leaving a comment or subscribing to the RSS feed to have future articles delivered to your feed reader.
By Change-Links|2017-03-30T23:25:27-05:00March 30th, 2017|Anti-Racism/Racism, California, Donald Trump, News, Politics|0 Comments