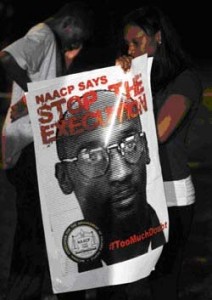 Last night at 11:08, Troy Anthony Davis was executed in the State of Georgia for the 1989 murder of a police officer. Much doubt existed in the case as seven of the nine witnesses recanted their testimony (one even claimed that an eighth murder witness was guilty) and no DNA or other physical evidence linked Davis to the crime. Monica Barrow of California and other protesters outside the Jackson State Prison react to news of the US Supreme Court appeal decision to refuse a stay of execution for Troy Davis on September 21, 2011 in Jackson, Georgia. (Photo by Jessica McGowan/Getty Images)

Former FBI Director William Sessions wrote, “The evidence in this case—consisting almost entirely of conflicting stories, testimonies and statements—is inadequate to the task of convincingly establishing either Davis’ guilt or his innocence.” Davis maintained his innocence up until his death, telling the family of the murdered police officer, “I was not the one who took the life of your father, son, brother.”

Last year on April 5, 29 miners died in a methane explosion caused by poor ventilation at the Upper Big Branch Mine in Raleigh County, W.Va. A report by the Mine Safety and Health Administration ruled that the event that caused the explosion could have easily been prevented by Massey Energy, which was well aware of a long history of safety problems in the mine. In the year leading up to the explosion, the Upper Big Branch Mine was cited 458 times for safety violations, with 50 of those violations being willful violations of the law—nearly five times the national average for citations of a single mine.

An investigation by the Mine Safety and Health Administration also revealed that Massey kept two sets of books—it recorded a clean safety record in one log book, which it provided to mine inspectors, while maintaining a private, internal log of known safety problems and the efforts made to fix them.

Despite this evidence of the willful violation of safety laws that could have prevented the miners’ deaths at Upper Big Branch, and despite evidence of widespread lying to federal investigators by Massey officials, CEO Don Blankenship is a free man allowed to enjoy the splendorous life of a multi-millionaire.

Only two Massey Energy officials, one foreman and one former chief of security, have so far been indicted—not for their responsibility in the deaths, but for lying and concealing documents from federal investigators. Another 18 executives, including longtime Massey Energy CEO Don Blankenship, refused to be interviewed by federal investigators, pleading the Fifth Amendment as protection from self-incrimination.

Even if company officials like Blankenship are prosecuted, it is unlikely that any will do jail time. Since 1970 more than 360,000 workers have died on the job in safety accidents, while only 84 cases have been prosecuted for the willful violation of safety rules that resulted in a worker’s death. Even if convicted, the penalty for wrongfully killing a worker on the job is only 6 months. Quite often company officials are not jailed, but merely fined if found responsible for willfully violating safety laws that lead to a worker’s death. The maximum penalty for a major safety violation is a mere $7,000—a price many companies are willing to pay for the death of a worker on the job. In 2010 alone, 4,547 Americans were killed on the job.

While many right-wing politicians, such as GOP presidential contender Rick Perry, will use the execution of Troy Davis to affirm their support for tough penalties for those convicted of killing people, few will say anything about the workers who are killed by corporations in preventable work accidents every year. But as easy as it would be to say that the issue of innocent men being killed is ignored by Republican politicians, the Democrats aren’t much better.

President Barack Obama refused to issue a statement on the execution of Troy Davis; likewise, he refused to move steadfastly earlier this year to implement a revision to federal law that would prevent children as young as 12 from operating potentially deadly farm equipment. (Minors working in agriculture are six times more likely to be killed in accidents than minors working in other industries.)

After three years of efforts, the Department of Labor, about a year ago, finally issued an internal proposal to revise federal law to prevent minors from working in dangerous farm occupations. Typically, rules like this are supposed to be reviewed within 90 days of their proposal to allow for quick implementation, especially rules related to life-and-death safety rules. But under heavy industry opposition, President Obama’s Office of Management and Budget held up the rules in review for nearly nine months—an “unnecessary delay,” according to Justin Feldman of Public Citizens’ Worker and Public Health Safety Advocate.

While big agriculture was busy unnecessarily delaying these rules, two 14 year old girls were electrocuted to death working on a farm in Illinois. Finally, only after the deaths of these two children and public protest from worker safety advocates, the OMB allowed the Department of Labor to take its next step.

Power and influence have clearly distorted the scales of the justice system when men like Troy Davis are executed in the face of questionable evidence of their guilt, while corporate CEOs like Don Blankenship, who evidence shows clearly and willfully disobeyed safety laws that caused the deaths of 29 workers, are allowed to go about sailing on their yachts.

I only wonder what would have been the Supreme Court’s reaction to a request for stay of execution, had the petitioner been a rich white man named Don Blankenship instead of a poor black man named Troy Davis.

If you enjoyed this post, please consider leaving a comment or subscribing to the RSS feed to have future articles delivered to your feed reader.
By John Johnson|2011-10-01T22:16:26-05:00October 1st, 2011|Uncategorized|0 Comments