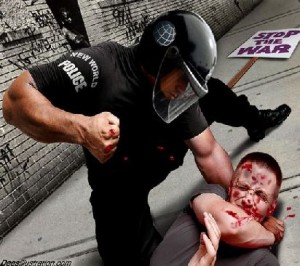 With signs of a global economic downturn mounting, US aggression across the Middle East and North Africa ratchets up.  And once again, US imperialism stands poised to swing open the gates of Hell.

According to the IMF’s World Economic Outlook report released last week, the “risks for a serious global slowdown are alarmingly high.”  The report projects the world economy to expand just 3.3 percent this year and 3.6 percent in 2013—both projections down from the IMF’s July forecast.   As Joseph Davis, chief economist at the Vanguard Group, cautioned to the Wall Street Journal, “The odds of a global recession are not fully appreciated.”

Indeed, for as the Financial Times reports, the Tracking Indices for the Global Economic Recovery, the Brookings Institution-Financial Times index of the world economy, finds severe problems “in both advanced and emerging markets.”

And though in its latest report the IMF continued to peddle the harsh elixir of austerity for the depressed economies of the euro zone periphery, the Fund also came to tacitly acknowledge the limits of austerity.

“The IMF now says global efforts to slash deficits and debt may have hurt growth because they occurred too quickly and too widely,” the Wall Street Journal reported.

But with the limits of austerity as a means of resolving the present crisis apparent, the last remaining card for the capitalist elite to play in their attempt to regenerate global capitalism appears to be in unleashing the forces of “creative destruction” wrought by military aggression.  As Henryk Grossman warned in his Law of Accumulation, “The destructions and devaluations of war are a means of warding off the immanent collapse [of capitalism], of creating a breathing space for the accumulation of capital.”

It is thus out of the need to renew the impetus for capital accumulation that the iron fist of US imperialism gains free rein once more across the full spectrum of what American neo-conservatives deem the “arc of instability.”

US Imperialism on the March

According to the New York Times, the Pentagon is readying military strikes in Libya in retaliation for the September attack on the US compound in Benghazi.  As the paper reports, “The top-secret Joint Special Operations Command is compiling so-called target packages of detailed information about the suspects.”

“Potential military options could include drone strikes, Special Operations raids like the one that killed Osama bin Laden and joint missions with Libyan authorities.”

The Times goes on to report that the Pentagon is also rushing to train and equip a 500 member Libyan commando force to be used to combat “Islamic extremists” within the country.

At the same time, the Pentagon has reportedly dispatched a task force of 150 military “planners” and “specialists” (i.e., special operations troops) to a Jordanian military base along the Jordan-Syria border.  Speaking at a NATO conference in Brussels last week, US Defense Secretary Leon Panetta claimed that the task force was sent to help Jordan “monitor chemical and biological weapons sites in Syria.”

“Once again, Western powers are digging deep for excuses to intervene militarily in another conflict-torn Middle East country,” an editorial in the state-run Xinhua news agency of China read in response to Obama’s threat.

Sure enough, as the New York Times reported, discussions have already taken place over using the Jordanian-stationed US task force to help establish a buffer zone within Syrian territory.

(In addition to the deployment of troops along the Jordan-Syria border,  CIA operatives are presently active along the Syria-Turkey border, facilitating the flow of arms to rebel forces.  Meanwhile, a recent report in the Los Angeles Times noted that the US military is currently using aerial surveillance drones to monitor Syrian chemical weapon stockpiles.)

Of course, the stepped up targeting of Syria cannot be decoupled from the joint Israel-US campaign against Iran.  After all, as hawks Michael Doran and Max Boot argue in a New York Times op-ed, the first reason American intervention in Syria is now merited is because it “would diminish Iran’s influence in the Arab world.”

The road to Tehran, we see, may very well lead through Damascus; although, the urge to fly non-stop to Tehran may just prove too strong to resist.

With Iran clearly in mind, the US and Israel are set to begin a massive three-week joint missile and air defense exercise later this month.  The exercise, Business Week reports, will include 3,500 US personnel and 1,000 members of the Israel Defense Forces, making it the largest joint military exercise held between the two nations.  The planned war game also occurs amid mounting speculation of a looming strike against Iran.

According to a report in Foreign Policy by David Rothkopf, the US and Israel are actively planning a joint “surgical strike targeting Iranian enrichment facilities.”  Rothkopf, a former Clinton administration official and Editor-at-Large of Foreign Policy, cites his source as stating that “the strike might take only ‘a couple of hours’ in the best case and only would involve a ‘day or two’ overall.”

The strike, Rothkopf quotes an “advocate” of an attack as stating, would have a “transformative outcome: saving Iraq, Syria, Lebanon, reanimating the peace process, securing the Gulf, sending an unequivocal message to Russia and China, and assuring American ascendancy in the region for a decade to come.”  This, of course, being the essence of the proverbial neo-con wet dream.

Remarkably, Rothkopf even goes as far as to triumph the idea of a “surgical strike” as a potential October Surprise Obama could use to propel himself back to the White House.

It appears now, however, that Rothkopf’s “report” may have been little more than a plant by the Israeli embassy in Washington.  A move, perhaps, intended to further coerce Obama into adopting a more hawkish stance on Iran, while simultaneously serving to downplay the risks of an attack.

Of course, peddling the notion of a so-called “surgical strike” on Iran is nothing particularly new.  In March, Jeffrey Goldberg reported for Bloomberg that Israeli talk of striking Iran had assumed a rather optimistic tenor.

“One conclusion key [Israeli] officials have reached,” Goldberg wrote after a trip to Israel, “is that a strike on six or eight Iranian facilities will not lead, as is generally assumed, to all-out war.”

(One cannot help wonder if the Rothkopf and Goldberg share the same source.)

Such assessments, though, are rather dubious, given that they directly contradict numerous assessments determining that any strike against Iran would quickly spiral into a regional conflict.  A report earlier this year in the New York Times, for instance, noted a war game simulation run by the Pentagon forecast that an Israeli strike “would lead to a wider regional war, which could draw in the United States and leave hundreds of Americans dead.”

Likewise, a September war game organized by Kenneth Pollack, a senior fellow at the Brookings Institution’s Saban Center for Middle East Policy, resulted in a dangerous escalation from both sides.  As the Washington Post’s David Ignatius reported, “The game showed how easy it was for each side to misread the other’s signals.”

“Misjudgment was the essence of this game,” Ignatius continued.  “Each side thought it was choosing limited options, but their moves were interpreted as crossing red lines. Attacks proved more deadly than expected; signals were not understood; attempts to open channels of communication were ignored; the desire to look tough compelled actions that produced results neither side wanted.”

“War,” as Clausewitz wrote, “is the province of danger.”

US imperial dreams, however, are hardly confined to setting the Middle East ablaze.  Imperial ambitions—rooted in the capitalist logic of endless expansion—are inherently limitless.  Thus, we see the US today readying to propel the greater Middle East into the abyss, while simultaneously “pivoting” to the Asia-Pacific in order to “contain” a rising China.

US imperialism, however, is destined for defeat (and sooner rather than later).  The US, after all, can only use its immense military power to keep potential competitors in check for so long.  The universal law of change cannot be held at bay by the barrel of a gun in perpetuity.  As Lenin asked and answered in his pamphlet Imperialism: “Is it ‘conceivable’ that in ten or twenty years’ time the relative strength of the imperialist powers will have remained unchanged? Absolutely inconceivable.”

But imperial powers are always dangerously deluded by the strength of their power—impervious to its ultimate limits.  As a George W. Bush administration official once remarked to the journalist Ron Suskind: “’We’re an empire now, and when we act, we create our own reality. And while you’re studying that reality—judiciously, as you will—we’ll act again, creating other new realities, which you can study too, and that’s how things will sort out. We’re history’s actors…and you, all of you, will be left to just study what we do.”

(One would be mistaken to believe that such hubris is not as present in the Obama White House as it was in the Bush administration.)

Such arrogance from the power elite—indicative of imperial rot—is but a byproduct of the imperialist imperative of endless expansion and conquest.  And it is this very imperative that today compels US imperialism towards igniting a military conflagration in the Middle East threatening to ensnare the global powers. “A great cemetery,” as Luxemburg warned nearly a century ago, awaits such a triumph of barbarism.

The only means with which to elude such a miserable fate is found in the revolutionary power of working people to resist.  As Luxemburg argued, escape from barbarism is only possible once the working class comes to seize “its own destiny and escape the role of the lackey to the ruling classes.”

Ben Schreiner is a freelance writer based in Wisconsin.  He may be reached at bnschreiner@gmail.com or via his website.

If you enjoyed this post, please consider leaving a comment or subscribing to the RSS feed to have future articles delivered to your feed reader.
By John Johnson|2012-11-01T17:53:33-05:00November 1st, 2012|Democracy, Editorial, Featured, Human Rights, Peace and War, United States, Wall Street|0 Comments