Time to Topple Trump & his Team

The 2016 presidential primaries demonstrated the decay of both major parties, the disgust of much of the population with politics as usual, and the desire for fundamental change. Yet because of the basic white supremacy of US society, the outcome of the election is a virtual one-party regime, with the GOP in control of the White House, both houses of Congress, 33 of 50 governors, both legislative chambers in 32 states, and eyeing control of the Supreme Court. In South Dakota, that translates into the GOP legislature and governor planning to repeal an ethics initiative passed by the voters in November. So the threat of fascism is far deeper and broader than Trump.

Trump’s cabinet of billionaires and military figures is another manifestation of the flip from the primaries to the ascension to power. Trump has “drained the swamp” into the Executive Office Building. 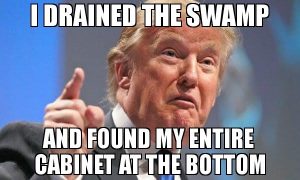 Presidential adviser and proposed National Security Council member Steve Bannon is the chief propagandist for the white supremacists in the so-called “alt-right.” Mad Dog Mattis at Defense required a Congressional exemption for having been a military officer too recently, undermining civilian control of the military. CIA head Mike Pompeo will consider lifting bans on torture. Exploiter of low-wage fast-food workers Andy Puzder is in charge of Labor. Rick Perry, who advocated abolishing the department, heads Energy. Privatizer Betsy DeVos, billionaire whose brother ran Blackwater, is Sec. of Education. Racist Jeff Sessions is slotted at “Justice” as Attorney General. Exxon’s Rex Tillerson is Sec. of State, and Steve Mnuchin, who made his bankster millions foreclosing on and evicting homeowners he suckered into unaffordable mortgages, runs Treasury. Gary Cohn, president of Goldman-Sachs, will head the National Economic Council with a $285 million golden parachute. Corporate raider Carl Icahn, prototype of using other people’s money to loot corporations, is Trump’s “regulations czar.” Climate denialist Scott Pruit runs the EPA. Phony wrestling entrepreneur Linda McMahon heads the Small Business Admin. Chicken magnate Sonny Perdue is in charge of Agriculture. This is a cabinet modeled on Mussolini’s definition of fascism as the merger of state and corporate power.

How do we confront and overcome this full court press towards fascism, turning its momentum against it? How do we translate the pledges and rhetoric of resistance, the continuing indigenous water protectors, the love and rage manifest in Black Lives Matter and the Movement for Black Lives, the mass upsurge in the streets reflected in the millions who participated in the Women’s March on Washington protests in LA, DC, NY, and hundreds of cities, and the outburst of disruptive airport protests that answered Trump’s refugee ban,  into an effective anti-fascist people’s movement that can overturn the whole system of exploitation and oppression? We have to build our own unity and break up Trump’s base of support. We can do so by pushing forward our own  program of change, not just reacting defensively to Trump’s moves and threats. We must act locally, nationally and globally. We must be prepared to operate from clandestinity or illegality as necessary, like any resistance movement worthy of the name, to provide sanctuary, reproductive health services, community self-defense, etc.

To build unity and take positive action against fascism by pushing for a new world, we need a People’s Anti-Fascist Shadow Cabinet at the national level. I nominate jailhouse lawyer Mumia Abu-Jamal for Attorney General, Medea Benjamin for Secretary of State, Kevin Rashid Johnson, Minister of Defense of the New Afrikan Black Panther Party (Prison Chapter) for Secretary of Defense, Dallas Goldtooth of the Indigenous Environmental Network for EPA, Naomi Klein for Energy, Kali Akuno of Cooperation Jackson for Secretary of Commerce, Connie Leak of Coalition of Labor Union Women for Labor, Karen Lewis of Chicago Teachers Union for Education, Kara Boyd of the National Black Farmers Association for Agriculture, homeless organizer Pete White of LA CAN for Housing & Urban Development, Manuel Criollo of the Bus Riders Union for Transportation, someone from the Strike Debt collective to run Treasury, Prof. Richard Wolff as head of the Council of Economic Advisers, Sara Beining of Iraq Veterans Against the War to head the VA, and single-payer advocate “Patch” Adams for Health & Human Services. I nominate Leonard Peltier for Secretary of the Interior, and Winona LaDuke to head the Bureau of Indian Affairs (or vice versa if they wish).

Locally or nationally, the Democratic Party offers no answer. Both parties are instruments of the rulers and their state, designed to obtain consent of the governed and translate it into control of state power for the benefit of the economic elite. We need to shatter Trump’s support base with a “Did You Vote for This?” campaign, directed at his voters, exposing his corrupt, repressive regime. We need to organize in rural areas and “red states,” as the anti-Vietnam-War movement did with GI coffeehouses. We must also become the point of the spear of people’s justified disgust with partisan politics, broadening and deepening it into revulsion of the entire imperial system. We should be exploring recalls and impeachment against state and federal legislators and governors, because becoming ungovernable involves tying the repressive government up in knots.

Thanks to previous generations of progressives, at the municipal level, many elections are non-partisan. The Nebraska state legislature is non-partisan. The US Constitution makes no mention of political parties. In states where the initiative process exists, like CA, we should move to make elections for state executive and legislative offices non-partisan, just like the current CA Superintendent of Public Instruction. We should move immediately at the city level to let all residents above the age of 16 vote (without regard to citizenship status, housing, or current or prior imprisonment). Locally and at the state level, we should be pushing to abolish the police and prisons, replacing them with community defense networks and transformative justice mechanisms. At the state level, we should move to establish state banks to handle all public finances and borrowing. We should counter displacement and gentrification with community-controlled cooperative economic development and housing, and advance struggles for a living wage and unions, clean energy, and universal health care.

Globally, we need to build deep and enduring networks of international solidarity, allying with the people of Haiti, Mexico, Venezuela, Brazil and other countries in sharp contradiction with US imperialism in this hemisphere and extending that to all the countries in Africa and Asia where the US has established bases. We need to re-invigorate the peace movement, opposing the new cold war and the threats of a hot one against Russia, China, Iran or North Korea. We need to demand immediate demobilization of all US troops, drones, bombs and militarized covert ops anywhere in the world (or in space).

If you enjoyed this post, please consider leaving a comment or subscribing to the RSS feed to have future articles delivered to your feed reader.
By Change-Links|2017-02-05T23:40:43-05:00February 5th, 2017|Uncategorized|0 Comments