Time To March on Washington … Again 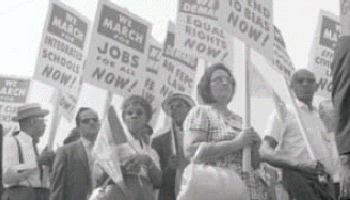 They carried signs that demanded “Voting Rights,” “Jobs for All” and “Decent Housing.” They protested the vigilante killing of an unarmed black teenager in the South and his killer’s acquittal. They denounced racial profiling in the country’s largest city.

This isn’t 1963 but 2013, when so many of the issues that gave rise to the March on Washington fifty years ago remain unfulfilled or under siege today. That’s why, on August 24, a broad coalition of civil rights organizations, unions, progressive groups and Democratic Party leaders will rally at the Lincoln Memorial and proceed to the Martin Luther King Jr. Memorial to honor the fiftieth anniversary of the march and dramatize the contemporary fight. (President Obama will participate in a separate event commemorating the official anniversary on August 28.) The Supreme Court’s decision gutting the Voting Rights Act in late June and the acquittal of George Zimmerman less than three weeks later make this year’s march “exponentially more urgent” with respect to pressuring Congress and arousing the conscience of the nation, says Ben Jealous, president of the NAACP, a co-sponsor of the march.

“The main themes will be voting rights, state laws like ‘stand your ground’ or local laws like stop-and-frisk, and the whole question of jobs and union-busting,” says the Rev. Al Sharpton of the National Action Network, who convened the march along with Martin Luther King III. “Fifty years after the original march for jobs and justice, we have a new version of the same issue.”

In 1963, current Congressman John Lewis—who nearly died marching for voting rights in Selma, Alabama—was the youngest and most radical speaker at the March on Washington. When Lewis returns to the Lincoln Memorial to address the rally on August 24, he will be the only surviving speaker from that historic afternoon. “We have come a great distance since that day,” he said recently, “but many of the issues that gave rise to that march are still pressing needs in our society—violence, poverty, hunger, long-term unemployment, homelessness, voting rights and the need to protect human dignity.”

When it comes to voting rights, seven Southern states have passed or implemented new restrictions that disproportionately target people of color since the Court’s Voting Rights Act ruling. This follows a presidential election in which voter-suppression efforts took center stage and blacks waited twice as long as whites to vote, on average. On a more structural level, one out of thirteen African-Americans (2.2 million people) cannot vote because of felon disenfranchisement laws—four times higher than the rest of the population.

These jarring statistics show a clear need for a twenty-first-century civil rights movement. “After the march, my hope is we will see more people going home being committed to doing work in their communities,” says Judith Browne Dianis, co-
director of the Advancement Project, a civil rights organization in Washington co-sponsoring the march. The Moral Mondays protests in North Carolina, the sit-ins by the Dream Defenders in Florida and the spontaneous rallies in 100 cities following the George Zimmerman verdict are evidence of a new wave of civil rights activism. “We’re seeing the civil rights movement rise again,” says Browne Dianis. “People understand that we have to get back to organizing and movement-building.”

For many years, civil rights organizations like the NAACP focused on building institutional power through litigation, lobbying and voting. Though they accomplished a great deal—we now have a two-term African-American president, after all—there’s a growing realization within the civil rights community that the protests and civil disobedience that defined the movement of the 1960s are once again essential to draw more attention to contemporary problems. “I wish this activism had more outbursts than just in North Carolina and Florida,” says civil rights veteran Julian Bond. “You wish it was twenty times as great, but to see these things that are going on—it’s exciting. These tactics are tried and true. They’ve worked in the past, and they’ll work now.”

Yet while the civil rights coalition is more diverse than it was in 1963—now including supporters from women’s rights, environmental, pro-immigration and LGBT groups—the funds are scarce today, even as the needs are growing. The declining strength of organized labor, which has accelerated following the passage of anti-union laws in GOP-controlled states since 2010, has drained the coffers of the organizations most accustomed to mobilizing masses of people. “The movement is more financially
strapped than it has been in modern memory,” says Jealous.

Another daunting obstacle for the civil rights coalition is the right wing’s success in promoting the notion that historic remedies for centuries of discrimination, like the Voting Rights Act and affirmative action, are no longer needed. “One of the great difficulties we have in helping people understand where we are on civil rights today is the desire of so many people to fix the civil rights movement in historical amber and visit it like a museum, without honoring that movement by being dynamically engaged in the principles that the movement stood for,” says Sherrilyn Ifill, director-counsel of the NAACP Legal Defense and Educational Fund, another co-sponsor of the march.

At a recent congressional celebration of the 1963 march at the US Capitol, for example, Senate minority leader Mitch McConnell reminisced about attending the march as a young civil rights activist, and House Speaker John Boehner introduced John Lewis. But when Senate majority leader Harry Reid denounced the flood of new voting restrictions in places like North Carolina and Texas following the Supreme Court’s Voting Rights Act decision and called for a congressional fix—to great applause—
McConnell and Boehner remained pointedly silent. “Boehner turned to McConnell with a questioning glance during the applause,” reported the Associated Press.

“You cannot, on the one hand, celebrate the march like John Boehner did, but then undermine what the march stood for, which is jobs and justice,” says Sharpton. “You can’t take a movement and say, ‘I celebrate the drama, but I don’t agree with the content.’”

At the same time, some progressive skeptics of the Obama administration believe the current civil rights leadership is too timid and cozy with those in power. Talk-show host Tavis Smiley predicts the new march will sidestep issues, like systemic poverty and the escalation of drone strikes, that King would have confronted were he alive today. “We’re going to get a lot of platitudes, a lot of great stories, a lot of endearing moments,” Smiley says. “But at the end of the day, we won’t even scratch the surface of the issues King was trying to get us to wrestle with.”

The radical politics of the 1960s civil rights movement, including those of its most mainstream leaders, is often glossed over in contemporary remembrances of pivotal anniversaries. Professor Cornel West, a caustic critic of this year’s commemoration, calls it the “Santa Clausification” of King. Many people also forget just how controversial the march was in 1963, both among the public and inside the civil rights community. Some thought it was too radical. President Kennedy asked the leaders to cancel the march. Lewis’s speech was censored to placate the archbishop of Washington. Bayard Rustin, the veteran socialist and civil rights activist who organized the event, was ostracized within the movement because of his homosexuality. Others thought it was too tame; Malcolm X dubbed it the “Farce on Washington.”

Despite all the criticism, the 1963 march remains a singularly important event in American history: the first time the country really understood what the civil rights movement stood for. The effect was greatest on the marchers themselves. “Many of the people at the march had never been to Washington before,” says Bond. “It was evidence to them that they had done something great and that great things would follow.”

Fifty years later, “there is, unfortunately, too much parallel between now and then,” says Jealous. “This is a moment for all of us to be rebaptized in the struggle.”

Ari Berman  wrote about North Carolina’s new voter-supression legislation in the wake of the Supreme Court’s recent gutting of the Voting Rights Act.

Ari Berman is a contributing writer for The Nation, covering national politics and the 2008 election, and an Investigative Journalism Fellow at The Nation Institute.

If you enjoyed this post, please consider leaving a comment or subscribing to the RSS feed to have future articles delivered to your feed reader.
By John Johnson|2013-09-09T03:31:24-05:00September 9th, 2013|Featured, News|0 Comments