They Are at War with Us – LAPD to Start Using Drones 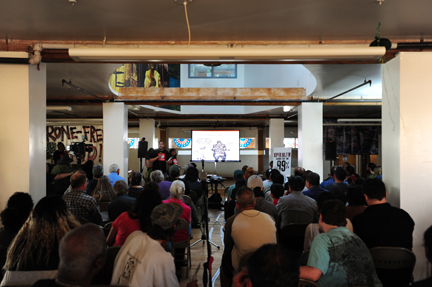 Militarization of police in our collective understanding came to light with full force with the murder of Michael Brown by law enforcement in Ferguson Missouri and the protests by community members demanding justice.  Images of grenade launchers, assault rifles, stun grenades, tasers, rubber bullets, tear gas, rocket launchers along with long range acoustic devices, mine sweepers, tanks, helicopters, and several types of surveillance equipment in the hands of Ferguson police dispelled any faith, if we still had any, about “protect and serve,”  and bared the real purpose of law enforcement in the United States operating more as a counter-insurgency force.  This is not an anamoly!
The Los Angeles Police Department (LAPD) is the most hyper-militarized law enforcement agency in the country.  As a leader and testing ground for new tactical weaponry and surveillance equipment, LAPD serves as a national model for the continued escalation of police militarization.

In late May 2014, the LAPD received two Draganflyer X6 drones from the Seattle Police Department (SPD). SPD had bought the drones through a grant from the Department of Homeland Security (DHS). The drones, quietly handed over to LAPD, never got off the ground in Seattle. They were stopped by the people of Seattle, who met the unveiling of the proposed drone program by drowning out the bureaucratic rhetoric of the Seattle Police.

Following the acquisition of drones by the LAPD, the Stop LAPD Spying Coalition launched the Drone-Free LAPD/No Drones, LA! Campaign.  The campaign sent a letter to Mayor Garcetti rejecting the recent acquirement of drones by LAPD stating “The acquisition of drones signify a giant step forward in the militarization of local law enforcement that is normalizing continued surveillance and violations of human rights of our communities.” After several requests to meet with the community to discuss the critical issue of drone use by LAPD, Mayor Garcetti continues to ignore community concerns. Instead on September 12, Mayor Garcetti endorsed CA Assembly Bill 1327, a state bill that authorized the use of drones by law enforcement – AB 1327 was ultimately vetoed by Governor Brown. Following the Mayor’s endorsement of drones for law enforcement, on Monday September 15, the Los Angeles Police Commission released a media advisory stating, “Office of Inspector General to house two Unmanned Ariel Vehicles while Policy is Reviewed.” The advisory further stated, “LAPD has begun their community outreach and process for drafting of policies and protocols for consideration by the Commission.”

Not only is Mayor Garcetti reneging on his stated promise of seeking public input on the use of drones by LAPD, the Police Commission has taken it a step further by taking possession of the Drones and now “await LAPD drafting policies and protocol for the commission’s approval.” Angelenos find this to be a gross violation of public trust.

While the whole country is demanding an end to police militarization, LAPD is now adding military style drone technology to its vast arsenal of weapons and surveillance equipment. The people of Los Angeles must speak out, organize and stop this. The Drone-Free LAPD/No Drones, LA! Campaign is comprised of a cross section of concerned individuals, including human and civil rights, privacy rights, faith-based, and community-based organizations.  For further information please go to http://www.nodronesla.org or email at stoplapdspying@gmail.com

If you enjoyed this post, please consider leaving a comment or subscribing to the RSS feed to have future articles delivered to your feed reader.
By Change-Links|2014-12-01T22:41:53-05:00December 1st, 2014|Drones|0 Comments