The Untold History of the U.S. 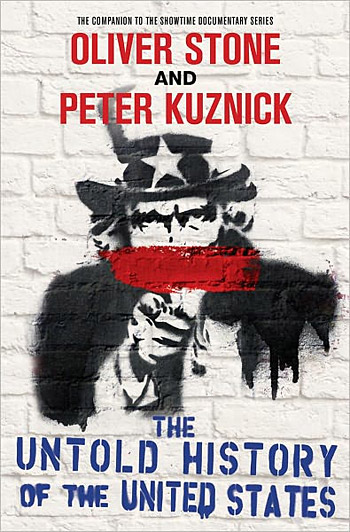 This is the finest book on recent US history I’ve ever read. Written by filmmaker Oliver Stone and Prof. Peter Kuznick, of American University in DC, this 800-page book dots the i’s, crosses the t’s, and amplifies many of the critical events of US history where Howard Zinn’s Peoples History of the United States left off. (These books complement each other).  It has material on the Obama presidency and back to McKinley’s presidency in the 1890s.

Here’s a representative quote from the introduction:
“Why does our country have military bases in every region of the globe, totaling more than 1000…? Why does the US spend as much on its military as the rest of the world combined? Why does it still possess 1000s of nuclear weapons… even though no nation poses an imminent threat? Why is the gap between rich and poor greater in the US than in any other developed country, and why is the US the only advanced nation without …universal health care?… Why are a tiny minority of wealthy Americans allowed to exert …control over US domestic politics, foreign policy, and media, while the great masses see  a diminution of their real power and standard of living?
“Why have Americans submitted to … surveillance, government intrusion, abuse of civil liberties, and loss of privacy?… Why does the US have a lower percentage of unionized workers than any advanced industrial democracy? Why …are those driven by greed and self interest in power over those who extol social values, like kindness, generosity, compassion, …and community-building? And why has it become so hard for the great majority of Americans to imagine a different … future than the one defined by current policy …and social values?”

The answer to me in a nutshell are the dynamics of unregulated, financialized, militarized and international CAPITALISM. In Untold History, the word “capitalism” is not used in a pejorative or theatrical way, but rather in describing acts and plots covering and coloring most of our history. This is the warp and woof of the book.
Here are a few chapter headings:
Introduction – Roots of Empire: “War is a Racket” (a quote from Marine commandant Smedley Butler)
Chapter 2 – The New Deal: “I Welcome Their Hatred” (The title quotes FDR’s response to the oligarchs)
Chapter 5 – The Cold War: Who Started It? (The answer to the question is right wing oligarchs and their politicians)
Chapter 11 – The Reagan Years: Death Squads for Democracy
Chapter 14 – Obama, Managing a Wounded Empire

This partial list hints at the dark role of money-power-greed, which like an almost-fatal infection runs through the veins of the historical and political body of the US, and which has almost totally destroyed its moral legitimacy.

Here’s a short quote from the last chapter on Obama, which I think is iconic of the man and his presidency so far:
“But rather than stand up to Wall Street, Obama prostrated himself before the CEOs of the 13 largest banks in March 2009, telling them, ‘I want to help. I’m not out there to go after you. I’m protecting you. But If I’m going to shield you from public and congressional anger …'” See p. 554 of Untold History.

The book is full of amazing facts, in a narrative which apologetic histories of the US omit. There’s a companion 4-DVD set of 10 hour-long episodes narrated by Stone, which present compelling archival film images of the great events of the past century, and the role the US leadership had in shaping and reacting to them. It’s a great informative read, and the DVDs are worthwhile, too.
Jeff Hirsch is an artist.  His graphics have appeared in Change-Links, Z Magazine and other publications.

If you enjoyed this post, please consider leaving a comment or subscribing to the RSS feed to have future articles delivered to your feed reader.
By Change-Links|2016-10-07T01:42:57-05:00December 1st, 2014|Book Reviews, Jeffrey Hirsch|0 Comments