The Real US Government 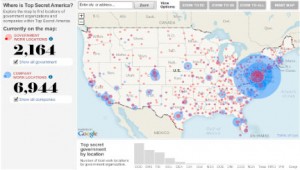 You can't escape them

The Real US Government

The Washington Post’s Dana Priest demonstrates once again why she’s easily one of the best investigative journalists in the nation — if not the best — with the publication of Part I of her series, co-written with William Arkin, detailing the sprawling, unaccountable, inexorably growing secret U.S. Government:  what the article calls “Top Secret America.”  To the extent the series receives much substantive attention (and I doubt it will), the focus will likely be on the bureaucratic problems it documents:  the massive redundancies, overlap, waste, and inefficiencies which plague this “hidden world, growing beyond control” — as though everything would better if Top Secret America just functioned a bit more effectively.   But the far more significant fact so compellingly illustrated by this first installment is the one I described in a previous piece when writing about the Obama administration’s escalating war on whistle blowers:

Most of what the U.S. Government does of any significance– literally — occurs behind a vast wall of secrecy, completely unknown to the citizenry. . . . Secrecy is the religion of the political class, and the prime enabler of its corruption. That’s why whistle blowers are among the most hated heretics. They’re one of the very few classes of people able to shed a small amount of light on what actually takes place.

Virtually every fact Priest and Arkin disclose underscores this point.   Here is their first sentence:  “The top-secret world the government created in response to the terrorist attacks of Sept. 11, 2001, has become so large, so unwieldy and so secretive that no one knows how much money it costs, how many people it employs, how many programs exist within it or exactly how many agencies do the same work.”  This all “amounts to an alternative geography of the United States, a Top Secret America hidden from public view and lacking in thorough oversight.”  We chirp endlessly about the Congress, the White House, the Supreme Court, the Democrats and Republicans, but this is the Real U.S. Government:  functioning in total darkness, beyond elections and parties, so secret, vast and powerful that it evades the control or knowledge of any one person or even any organization.

Anyone who thinks that’s hyperbole should just read some of what Priest and Arkin chronicle.  Consider this:  “Every day, collection systems at the National Security Agency intercept and store 1.7 billion e-mails, phone calls and other types of communications.”  To call that an out-of-control, privacy-destroying Surveillance State is to understate the case.  Equally understated is the observation that we have become a militarized nation living under an omnipotent, self-perpetuating, bankrupting National Security State.  Here’s but one flavoring anecdote:

“You can’t find a four-star general without a security detail,” said one three-star general now posted in Washington after years abroad. “Fear has caused everyone to have stuff.  Then comes, ‘If he has one, then I have to have one.’ It’s become a status symbol.”

What’s most noteworthy about all of this is that the objective endlessly invoked for why we must acquiesce to all of this — National Security — is not only unfulfilled by “Top Secret America,” but actively subverted by it.  During the FISA debate of 2008 — when Democrats and Republicans joined together to legalize the Bush/Cheney warrantless eavesdropping program and vastly expand the NSA’s authority to spy on the communications of Americans without judicial oversight — it was constantly claimed that the Government must have greater domestic surveillance powers in order to Keep Us Safe.  Thus, anyone who opposed the new spying law was accused of excessively valuing privacy and civil liberties at the expense of what, we are always told, matters most:  Staying Safe.

But as I wrote many times back then — often by interviewing and otherwise citing House Intelligence Committee member Rush Holt, who has been making this point repeatedly — the more secret surveillance powers we vest in the Government, the more we allow the unchecked Surveillance State to grow, the more unsafe we become.  That’s because the public-private axis that is the Surveillance State already collects so much information about us, our activities and our communications — so indiscriminately and on such a vast scale — that it cannot possibly detect any actual national security threats.  NSA whistle blower Adrienne Kinne, when exposing NSA eavesdropping abuses, warned of what ABC News described as “the waste of time spent listening to innocent Americans, instead of looking for the terrorist needle in the haystack.”  As Kinne put it:

“By casting the net so wide and continuing to collect on Americans and aid organizations, it’s almost like they’re making the haystack bigger and it’s harder to find that piece of information that might actually be useful to somebody.  You’re actually hurting our ability to effectively protect our national security.”

The Government did not fail to detect the 9/11 attacks because it was unable to collect information relating to the plot.  It did collect exactly that, but because it surveilled so much information, it was incapable of recognizing what it possessed (“connecting the dots”).  Despite that, we have since then continuously expanded the Government’s surveillance powers.  Virtually every time the political class reveals some Scary New Event, it demands and obtains greater spying authorities (and, of course, more and more money).  And each time that happens, its ability to detect actually relevant threats diminishes.  As Priest and Arkin write:

“The NSA sorts a fraction of those [1.7 billion e-mails, phone calls and other types of daily collected communications] into 70 separate databases. The same problem bedevils every other intelligence agency, none of which have enough analysts and translators for all this work.”

This world is so vast, secretive and well-funded that it’s very difficult to imagine how it could ever be brought under control.  That’s particularly true given its inextricable intertwining with the private sector:  the billions upon billions of dollars funneled from the Government to its private-sector “partners,” which is the subject of the not-yet-published second installment of the Priest/Arkin article.  As I wrote when examining the revolving public/private shuttling of former DNI and Booz Allen executive Michael McConnell:

“In every way that matters, the separation between government and corporations is nonexistent, especially (though not only) when it comes to the National Security and Surveillance State. Indeed, so extreme is this overlap that even McConnell, when he was nominated to be Bush’s DNI, told The New York Times that his ten years of working “outside the government,” for Booz Allen, would not impede his ability to run the nation’s intelligence functions. That’s because his Booz Allen work was indistinguishable from working for the Government, and therefore — as he put it — being at Booz Allen “has allowed me to stay focused on national security and intelligence communities as a strategist and as a consultant. Therefore, in many respects, I never left.”

As the NSA scandal revealed, private telecom giants and other corporations now occupy the central role in carrying out the government’s domestic surveillance and intelligence activities — almost always in the dark, beyond the reach of oversight or the law.

Long before the Priest/Arkin article, Tim Shorrock has been documenting this sprawling, secretive, merged public/private world that combines unchecked surveillance and national security powers with enormous corporate profits.  So long as the word Terrorism continues to be able to strike fear in the hearts of enough citizens and media stars — as Communism did before it — the political class, no matter who is elected, will be petrified to oppose any of this, even if they wanted to, and why would they want to?  They wouldn’t and they don’t.  And it thus grows and becomes more powerful, all justified by endless appeals to The Terrorists.

That’s why it is difficult to imagine — short of some severe citizen unrest — how any of this will be brought under control.  One of the few scenarios one can envision for such unrest involves growing wealth disparities and increasingly conspicuous elite corruption.  In The New York Times today, investment banker and former Clinton Treasury official Roger Altman announced that the alleged “tension between President Obama and the business community” can be solved only if the political class is willing to “fix Social Security” — i.e., to slash Americans’ retirement security.  Sooner or later (probably sooner), one way or another (probably this way), that’s going to happen.  It’s inevitable.  As George Carlin put it several years ago, in an amazingly succinct summary of so many things:

That’s really the only relevant question:  how much longer will Americans sit by passively and watch as a tiny elite become more bloated, more powerful, greedier, more corrupt and more unaccountable — as the little economic security, privacy and freedom most citizens possess vanish further still?  How long can this be sustained, where more and more money is poured into Endless War, a military that almost spends more than the rest of the world combined, where close to 50% of all U.S. tax revenue goes to military and intelligence spending, where the rich-poor gap grows seemingly without end, and the very people who virtually destroyed the world economy wallow in greater rewards than ever, all while the public infrastructure (both figuratively and literally) crumbles and the ruling class is openly collaborating on a bipartisan, public-private basis even to cut Social Security benefits?

Glenn Greenwald was previously a constitutional law and civil rights litigator in New York. He is the author of the New York Times bestselling book “How Would a Patriot Act?,” a critique of the Bush administration’s use of executive power, released in May 2006. His second book, “A Tragic Legacy”, examines the Bush legacy.