Where dope got bought

when some got rich

and others turned snitch

who didn’t gamble but lost

who wasn’t a player but became mob boss

because the law of the street is survival

because if you’re not my enemy you’re my rival

since slaves were traded for sugar

since the oldest profession is hooker

early in life these cards were given

at the end, life wasn’t worth livin’

This is the poet’s coroner

where lives get examined and testify

This is the poet’s coroner

The pain is the price to escape

the ones that bend and break

the ones that couldn’t wait

the 500 years and we still ain’t awake

this is the tale of struggle

this is about the quick hustle

the reality of the horror

the death and dishonor

told by the poet’s coroner 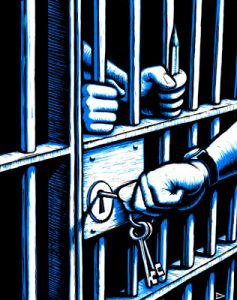 The poet, neo-colonial government name Alfonso Percy Pew, is a Black prisoner of the Pennsylvania Dept. of Corrections, #BT-7263, SCI Houtzdale, PO Box 1000, Houtzdale PA 16698-1000. You can set up an email account to communicate with him (for a small fee per email message, since the prison systems are constant profit center for a host of commercial interests) via http://www.gtl.net/PADOC (All such email correspondence is read and reviewed by prison authorities and may not reach the prisoner.) His poetry has appeared previously in Change Links Poetry Corner (which perhaps inspired the “poet’s coroner” and its post-mortem of the street corner and the prison).

If you enjoyed this post, please consider leaving a comment or subscribing to the RSS feed to have future articles delivered to your feed reader.
By Change-Links|2017-09-30T02:57:31-05:00September 30th, 2017|Anti-Racism/Racism, Human Rights, Justice/Injustice, Prisons|0 Comments