The People’s Budget LA Coalition, led by Black Lives Matter-Los Angeles, undertook an urgent public process of participatory budgeting to solicit input from Angelenos about their priorities for the city and how they would like public resources to be invested. This participatory project exposes the secretive and undemocratic processes that shape Mayor Eric Garcetti’s draconian spending plans year after year.

We know that budgets are moral documents. Despite this, the mayor’s budget routinely drains unrestricted revenues to resource an already-bloated police budget.

Against this backdrop, a Black Lives Matter-led uprising galvanized millions of people across the nation and around the world to lift the policy demands, “defund the police” and “re-imagine public safety” in response to the murders of Black people at the hands of law enforcement. This coincided with a global health pandemic that disproportionately harms Black people, including the deleterious effects of an economic fallout.

In May 2020, we released the People’s Budget, after collecting survey data and facilitating a series of community-based town hall meetings to center the priorities of Angelenos most harmed by spending plans that overinvest in traditional policing systems, which are rooted in white supremacy and anti-Blackness.

Once the 2020-21 budget took effect, and in response to mounting public pressure following the police murder of George Floyd in Minneapolis, the mayor publicly promised to divest $150 million from the LAPD to, in turn, invest those dollars in Black communities. While the mayor’s promise of resources was not nearly enough, we remain committed to holding the mayor accountable to the promise he made to invest $250 million into Black communities.

Over the last year, we’ve gathered input from more than 44,000 Los Angeles city residents to document budget priorities. Our coalition has catalyzed a Participatory Budgeting process across LA, holding 10 sessions with thousands in attendance, both independently and in partnership with elected officials. We put forth a transparent Participatory Budgeting model for the mayor and City Council to use and several of them have committed to doing so. We have also met with several City Council members to provide specific recommendations to them and to the mayor based on what we’ve heard from Angelenos. The mayor has repeatedly stated he would meet with us but to date, has not responded to our requests to schedule a meeting.

We have not yet seen the changes the people are demanding to our city budget. Our data continues to reveal a clear referendum: invest in universal needs (e.g., housing security, public health, health care, mental health, and wellness, etc.) and divest from traditional forms of policing. The people want a participatory budgeting process and they want substantial changes in the budget priorities.

We continue to demand that these critical resources go to Black Los Angeles, specifically Black-led, community organizations. This report shares findings from our Participatory Budgeting Sessions and our People’s Budget Survey, which the mayor and City Council must use to inform a much larger, direct investment in Black communities. 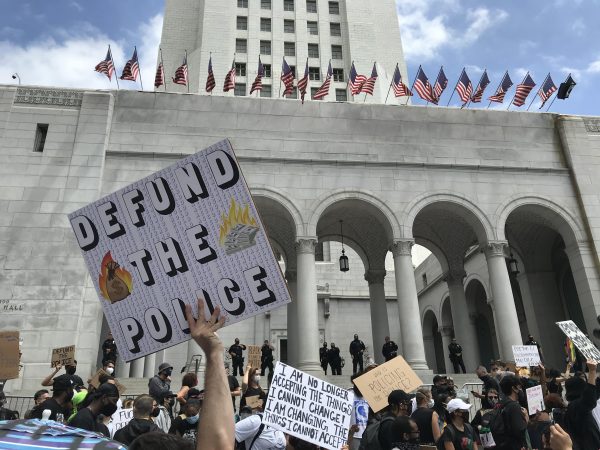 Black Lives Matter-Los Angeles has challenged spending on police since 2015. We have heard from thousands of Angelenos who continue to underscore the urgency of defunding the police, not only to fund the critical investments our communities need, but also to end the centuries of harm the police have caused.

In 2011, the Youth Justice Coalition surveyed 2,617 residents over the course of a 50-mile March for Respect. They asked what it would take to reduce violence in Los Angeles. People who were surveyed overwhelmingly prioritized youth centers, youth jobs, and intervention workers/peace-builders in schools and communities over police, courts, and gang injunctions.

In 2017, Community Coalition collected over 4,000 surveys to highlight the needs of South Central LA, 25 years after the LA uprisings. Respondents overwhelmingly supported more money for the housing crisis and support services, while they scorned LAPD for their mistreatment of residents.

In 2019, the partners of the Brothers, Sons, Selves Coalition surveyed 3,378 youth and community members across LA county. Youth wanted to seek increased investments in youth development (91%) and jobs (93%) and a decreased investment in Law enforcement (41%).

Police presence often turns a nonviolent situation into a violent one. We must remove police and fund community workers and professionals who can provide the needed support. In June 2020, City Council put forward two motions: one to establish alternative crisis response for nonviolent situations and one to remove police from transportation and traffic. Changes like these must be expedited and funded by removing funds from LAPD. We are calling on City Council to reject the mayor’s increase to LAPD and to reject any additional funds LAPD requests.

Underscoring the Black LA demands, folks shared how inequitable our healthcare systems are for both preventing health emergencies and reacting to them. COVID-19 brought this sharply into focus as LA County’s Black residents died at twice the rate of other populations.

Participants wanted to see significant investment in mental health, substance use programs, as well as “holistic interventions that promote family and community well-being and center culture as a central feature in wellness.”

Prioritizing Black children, their education, and keeping families together was a central theme. Folks also wanted to see financial support given directly to families who have had loved ones killed by the police as well as reparations and a Universal Basic Income (UBI). Universal childcare and investments in preschool were highlighted.

Folks highlighted the need for financial support to people exiting the carceral system with a focus on prioritizing Black mothers who have been incarcerated. The promise Measure M made to invest in social entrepreneurship “to assist communities hit hardest by the War on Drugs” has not been realized nearly five years later.

Education is a core investment theme, including free or low cost college, school supplies, and more financial support for teachers. Educators highlighted the immense disparities in schools where Black children face a drastic lack of technology and learning resources and where the buildings themselves are unsafe.

Participants wanted to see investments in Black and Brown Angelenos who are starting or growing their business or nonprofit. Small business grants, notably including street vendor grants, were highlighted. Specific needs include technology assistance and an investment in BIPOC worker-owned cooperatives.

Municipal Wi-Fi, computers, phones, and expanded library programs came forward as a critical new theme. During the pandemic, many people lost access to school, work, health services, and other lifesaving information due to lack of internet or access to devices.