The Missing Message in the Women’s March

The Missing Message in the Women’s March

Editors of Resumen LatinoAmericano: The large women’s marches that took place in the US to mark a year of the Trump Administration were primarily organized by elements of the Democratic Party. The energy in the streets was strong and positive but the political message was to channel that into Dems winning back congress in the 2018 mid term elections. The Democrats are every bit a party of continuous war as are the Republicans. The solution is not voter registration drives but building a mass independent movement.

The March will speak out against hate, discrimination, and exploitation. That’s good. The March will also speak out strongly in favor of equality, women’s reproductive choice and respect for all people regardless of disability, gender, orientation, etc. That’s also good.

But the subject of U.S. military aggression and war is essential. We hope many marchers will include this in their signage. Despite many antiwar groups actively advocating for “peace” to be in the platform/demands of the March, this is the second year peace is being minimized or ignored by the organizers.

For the past century or more, the US has intervened against governments the establishment does not like. A partial list includes Philippines, Korea, Guatemala, Iran, Cuba, Chile, Vietnam, Angola, Nicaragua, El Salvador, Panama, Lebanon, Somalia, Haiti, Afghanistan, Iraq, Venezuela, Honduras, Libya and Syria!

These acts have killed millions of people including thousands of our own youth, both women and men. They have resulted in hundreds of thousands returning injured physically or psychologically. Mothers, wives, sisters, aunts, and others have been profoundly and unnecessarily handed a lifetime of pain and sorrow because of the US war machine.

Shouldn’t it be a priority to change the policies and acts of economic aggression and military intervention that result in violence, war and destruction? Shouldn’t we address the causes of the refugee crisis as well as the symptom? After all, most refugees never wanted to leave their homelands.

We’re sure most of the women and allies attending the Women’s March agree with us on the need for action and protest against our ongoing wars. The escalating military budget is driving our country further into debt. Meanwhile, infrastructure is decaying, health care and housing is diminishing and education is underfunded. College students graduate with astronomical debt. Meanwhile, there is growing police oppression.

We must include PEACE in our march because unless we can stop the trend, a nuclear war is going to destroy civilization. There’s no such thing as a winnable nuclear war and dismantling ALL nukes should be at the forefront of any of our activism. The continuity of human life on our planet is at stake. These are Women’s issues.

The demand for peace not war should be integral to the Women’s March. 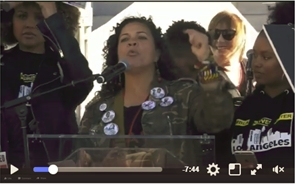 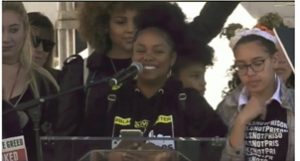 Ed Note: The Palestinian American Women’s Association (PAWA) pulled out of the LA march over a speaking slot for Scarlett Johansen, who was a spokesperson for Sodastream, a product that was manufactured by an Israeli company operating in the illegally-occupied Palestinian territories. Dr. Melina Abdullah and her daughter Thandiwe of #BlackLivesMatterLA, who did speak, raised the issues of Palestine, police terror and white women’s majority support for Trump.