The Meaning of Labor Day 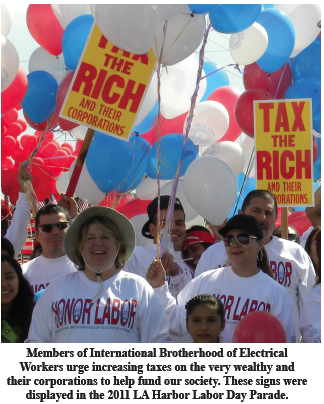 The meaning of Labor Day has been lost to most Americans, just as is the case with many other holidays such as Independence Day, Memorial Day or Christmas. For most people today Labor Day signifies a great day for bargain sales at retail stores, the beginning of a new school year and most of all the end of summer.

In contrast, Labor Day was originally intended to be a celebration for working people in general and by organized labor in particular, was dedicated to the social and economic achievements of working people and constitutes (theoretically, at least) a yearly national tribute to the contributions working people have made to the well being of the nation.

In the past, it was celebrated in cities throughout the nation by street parades to show the strength and esprit de corps of the labor organizations of the community accompanied by a festival and picnic for the recreation and amusement of workers and their families and speeches by prominent men and women. Wilmington is unique in continuing a tradition that is no longer observed in most of the nation.

The first Labor Day was held by the New York Central Labor Union in 1882. By 1885 it had become a national event, celebrated by Central Labor Unions in virtually every industrial center of the nation on the first Monday in September, though not yet a statutory holiday. The next year, 1886 a national one-day general strike was called to demand an 8-hour workday. Half a million workers took part nationally but the center of the movement was in Chicago, where a number of other strikes were underway immediately before and after May 1. On May 3 a striking worker was killed by police while picketing outside the McCormick Harvesting Machine Company factory. As a consequence a group of anarchists called for a protest demonstration the next night in Haymarket Square. As that demonstration broke up a bomb was thrown into the police who surrounded the demo, killing a police officer. The police then charged into the crowd firing. While some shots were fired from the crowd, most of the shots were from the police an in the darkness they ended up shooting at each other. In all, seven policemen and at least four workers were killed. About 60 policemen were wounded in the incident and as many as 70 civilians, though it is unclear how many civilians were wounded since many, fearing arrest, chose not to seek professional medical attention.

There was an immediate police crackdown supported by the press and business interests on labor unions, but especially on anarchists and German immigrants. Ultimately 8 German and German-American anarchists were arrested. Only two of the defendants had been present at Haymarket at the time the bomb was thrown, and they were on the speakers’ podium urging the crowd to cooperate with police and disperse. One was sentenced to 15 years and the other 7 to be hanged. Of the seven, two had their sentences commuted to life in prison. One committed suicide the night before the executions and four were executed. The incident got considerable press coverage in the rest of the world and there was considerable support for the Haymarket martyrs outside of the United States.

In the years following the Haymarket incident organized labor in America continued to celebrate both the first Monday in September and the first of May as labor holidays, though May 1 was more a continued struggle for the eight hour day which did not become law until 1937 when the Fair Labor Standards Act was passed. In addition to the continuing struggle for the eight-hour day, May 1 also became an international labor holiday celebrating labor militancy in general and commemorating the Haymarket martyrs.

Following the deaths of a number of workers at the hands of the U.S. military and U.S. Marshals during the Pullman Strike in 1894 Congress, seeking to mute labor militancy with a carrot as well as a stick, rushed through legislation unanimously approving legislation that made Labor Day, the first Monday in September, a national holiday. President Grover Cleveland signed it into law a mere six days after the end of the strike. Thus, the September date that had originally been chosen by the New York Central Labor Union and which had already been observed by labor unions throughout the nation for several years was selected rather than the more widespread May Day date in order especially to disassociate Labor Day from a commemoration of the Haymarket martyrs. Nevertheless, in most of the world, “Labor Day” is synonymous with May 1 in commemoration of the eight-hour day movement, which began in 1886 in Chicago.

©2014 [Robert Paul Gabrielsky] any or all of this document may be reprinted, with attribution, by anyone, anywhere and at any time.

If you enjoyed this post, please consider leaving a comment or subscribing to the RSS feed to have future articles delivered to your feed reader.
By Change-Links|2014-09-21T23:28:13-05:00September 1st, 2014|Commentary, Featured, News|0 Comments