The Fire This Time by Mumia Abu-Jamal

Australia: The Fire This Time 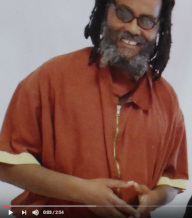 Australia, the fire this time.

Tongues of fire licked the trees of New South Wales, a state in SouthEast Australia.  Like a beggar at a feast, red flowers of flame jumped across the nation, eating all in its path. A living expression of what Aussies call, ‘Fire Season’. Honestly.  ‘Fire Season’.

This, the time of Australian summer is the hottest summer since records were kept. And fire season gives a whole new meaning to the passive term ‘Global Warming’.

Is this not a sign? A symbol of things to come?

From imprisoned nation,  this is Mumia Abu-Jamal

If you enjoyed this post, please consider leaving a comment or subscribing to the RSS feed to have future articles delivered to your feed reader.
By Change-Links|2020-02-01T16:02:43-05:00February 1st, 2020|Anti-capitalism, Anti-Racism/Racism, Climate Change, Ecology, Mumia Abu-Jamal|0 Comments