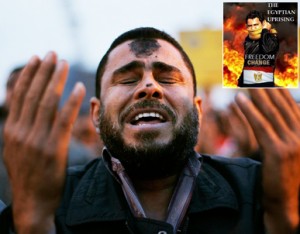 The Egyptian Uprising Is a Direct Response to Ruthless Global Capitalism

Economic decline at the hands of ‘hot’ money has driven Egyptians’ discontent.

The revolution in Egypt is as much a rebellion against the painful deterioration of economic conditions as it is about opposing a dictator, though they are linked. That’s why President Hosni Mubarak’s announcement that he intends to stick around until September was met with an outpouring of rage.

When people are facing a dim future, in a country hijacked by a corrupt regime that destabilized its economy through what the CIA termed, “aggressively pursuing economic reforms to attract foreign investment” (in other words, the privatization and sale of its country’s financial system to international sharks), waiting doesn’t cut it.

Mohamed Bouazizi, the 26-year-old Tunisian who catalyzed this revolution, didn’t set himself on fire in protest of his inability to vote, but because of anguish over his job status in a country with 15.7 percent unemployment. The six other men in Algeria, Egypt and Mauritania who followed suit were also unemployed.

Tunisia’s dismal economic environment was a direct result of its increasingly “liberal” policy toward foreign speculators. Of the five countries covered by the World Bank’s, Investment Across Sectors Indicator, Tunisia had the fewest limits on foreign investment. It had opened all areas of its economy to foreign equity ownership, except the electricity sector.

Egypt adopted a similar come-and-get-it policy, on steroids. From 2004 to 2008, as the world economic crisis was being stoked by the U.S. banking system and its rapacious toxic asset machine, Mubarak’s regime was participating in a different way. Mubarak wasn’t pushing subprime loans onto Egyptians; instead, he was embarking on an economic strategy that entailed selling large pieces of Egypt’s banks to the highest international bidder.

The result was a veritable grab-fest of foreign bank takeovers in the heart of Cairo. The raid began with Greek bank, Piraeus, taking a 70 percent stake in the Egyptian Commercial Bank in 2005, and included the sale of Bank of Alexandria, one of the four largest state-run banks, to the Italian bank, Gruppo Sanpaolo IMI in 2006. For the next two years, “hot” money poured into Egypt, as international banks muscled into Egypt and its financial system, before the intensity leveled off in 2008.

While foreign banks were setting up shop, Egypt also eliminated the red tape that came with foreign property investment, through decree number 583. This transformed the country, already a tourist hotspot, into a magnet for global real estate speculation. (Something that worked out really well for Ireland.) Even one of Goldman Sachs’ funds got in on the game, buying a $70 million chunk of Palm Hills Development SAE, a luxury real estate developer.

Other countries in the region, such as Jordan, where the unemployment rate is 13.4 percent, and the poverty rate 14.2 percent (as in the U.S.), tried to mimic Egypt’s “open” policies, in varying degrees. That’s why eight of the 21 banks operating in Jordan are now foreign-owned, and its insurance market is dominated by U.S.-based, MetLife American Life Insurance Company. But it was Egypt that did it best.

From 2004 to 2009, Egypt attracted $42 billion worth of foreign capital into its borders, as one of the top investment “destinations” in the Middle East and Africa. “Hot” money entry was made easy, with no restrictions on foreign investment or repatriation of profits, and no taxes on dividends, capital gains or corporate bond interest. As a result, volume on the Egyptian stock market swelled more than twelve-fold between 2004 and the first half of 2009.

Egypt and the United Arab Emirates even eliminated minimum capital requirements for investment, meaning that speculators could buy whatever they wanted, with no money down, a practice that didn’t exactly impel them to stick around for long.

But, as we learned in the U.S., what goes up with artificial helium plummets under real gravity. Starting in the second half of 2009, oil prices fell and foreign banks slashed their capital holdings in Arabic nations. The hot money was cooling off. Even in the oil-rich UAE, the speed of capital outflow set foreign capital levels back to where they were in 2004, demonstrating how temporal, deceptive, fickle and irresponsible international speculative capital is. When hot money gets cold, it moves on, leaving vast economic devastation in its wake.

Not surprisingly, those foreign speculation strategies didn’t bring less poverty or more jobs either. Indeed, the insatiable hunt for great deals, whether by banks, hedge funds, or private equity funds, as it inevitably does, had the opposite effect.

Whenever hot money hones in on a geographical location or financial product, it creates the appearance of economic enhancement (such as with our GDP growth based on financial services, for instance). But, on its way out the door, that mirage is replaced with harsh decline.

In March 2010, in an effort to keep foreign capital coming in, Egypt’s Ministry of Investment presented the country’s virtues to investors in a glossy “Invest in Egypt” brochure. The document proudly cited Egypt as being one of the world’s top 10 “Reformers,” as reported by the World Bank and International Finance Corporation’s (IFC).  The World Bank’s definition of “reformer” has nothing to do with conditions for citizens, and everything to do with the degree and speed to which “hot” international money can zoom in and out of a country. Egypt had made the top 10 “Reformers” list for four out of the past five years (a distinction shared with Colombia, where urban unemployment has risen to over 13 percent).

Ironically, the Ministry’s brochure touted the large college graduate population entering the job market each year — 325,000. The same graduates are the core of the current revolution. They failed to find adequate jobs and are faced with an official unemployment rate of just below 10 percent (though, similar to the U.S., that figure doesn’t account for underemployment, poor job quality or long-term prospects). Meanwhile, 20 percent of Egypt lives in poverty (compared to 14 percent and growing in the U.S.) and 10 percent of the population controls 28 percent of household income (compared to 30 percent in the U.S.).

When a country relinquishes its financial system and population’s economic well-being to everyone else’s pursuit of “good deals,” the fallout will be substantial. Sub-prime lending may not have been one of Egypt’s problems as it was in the United States, but soured foreign real estate investment was. Also, foreign banks persuaded Egypt to issue complex securities with crazy derivatives in them (shades of Greece). Those securities plummeted in value as foreign speculators shunned them. Today, credit default swap spreads on Egyptian debt (and that of other Arabic countries) have substantially dropped in value, as international speculators are betting on further upheaval, targeting Egypt like just another number on a dartboard.

Citizens protesting in the streets from Greece to England, and more demonstrably, from Tunisia to Egypt, may be revolting for national reasons and against individual governments, but they share a common bond. They are revolting against a world that lines the pockets of rich deal-makers while sticking the tab to ordinary people. That bond is global. Related protests could reach Colombia and Ghana — and maybe someday, the United States.

For in the United States, economic statistics are no better. By certain measures, like income inequality, they are worse than in Egypt. But we have no evil dictator to be a common focus for, say, an American economic revolution. Here, we freely elect the politicians who campaign with corporate funds and deregulate our financial system, who bail out entire banks instead of individual mortgage holders, and who keep corporate tax receipts low while increasing audits on small businesses and struggling individuals. Here, we elect the leaders who govern our growing income inequality, and wonder how Wall Street can pay itself another round of record bonuses.

In that respect, as difficult as conditions are in the Middle East, there may be more hope for economic change to rise from those revolting populations. It may not come from simply overthrowing the current regime, given the entrenched “liberalization” strategies, but it is certainly an excellent start.

Nomi Prins is a senior fellow at the public policy center Demos and author of It Takes a Pillage: Behind the Bailouts, Bonuses, and Backroom Deals from Washington to Wall Street.

If you enjoyed this post, please consider leaving a comment or subscribing to the RSS feed to have future articles delivered to your feed reader.
By John Johnson|2011-02-07T13:22:18-05:00February 4th, 2011|Commentary, Democracy, Editorial, Peace and War, Politics|0 Comments