As new statewide coalition mounts campaign to repeal statewide restriction of rent control, Carolina Rodriguez and her children appeal to Winstar Properties to rescind $750 per month increase. The group then walked to Mayor Garcetti’s official residence to request that he support legislation to repeal the Costa-Hawkins Act.

As California stands in the height of the worst housing crisis the state has ever seen, hundreds of tenants across multiple cities are taking matters into their own hands by confronting rent-gouging corporate landlords to demand a moratorium on rent increases. LA-based corporate landlord Winstar Properties describes itself as “the largest buyer of multi-family real estate in Los Angeles.” After just 5 years of operation, it owns 75 properties across L.A. County with more than 2000 rental units.  What the company’s advertising and investment brochures don’t say is that this business model leads to the displacement of existing, often low-income tenants who cannot afford the higher rents.

On Thursday, July 27, at the company’s Hancock Park area corporate headquarters, Carolina Rodriguez of East Los Angeles told the story of what Winstar’s purchase of her apartment building in early 2016 has meant for her family of herself, her husband and six children. Three months after Winstar took possession, they jacked up the rent on Carolina’s two-bedroom apartment 63%, from $1250 a month to $2000, despite the building’s having seriously poor maintenance.  The working class family lives on a $2250 a month paycheck so there’s no way they can afford the new rent. 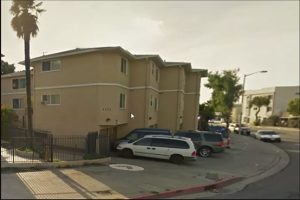 Seven of the eight families in the building have been forced out, replaced by college students. Carolina and her family are fighting to stay.  Like thousands of other displaced low-income families across California, the Rodriguez family has not been able to find any other housing they can afford that is near their schools, friends, health care, and family. “If we are not able to stay at an affordable rent, we’ll probably have to move to Las Vegas,” she says.

Following the rally, the group conducted a procession to Mayor Garcetti’s official residence – located nearby – to request the Mayor’s support in passing legislation to repeal the Costa Hawkins act, which restricts rent control, as well as a rent freeze for large corporate landlords.

The tenants and organizations leading this statewide day of action are part of a new, broad-based coalition, Housing Now!, which has united to fight for the repeal of the statewide restrictions on rent control – established by the Costa Hawkins Rental Housing Act.  The Housing Now! coalition has over 50 local and statewide tenant and community groups, labor unions, and housing advocates and includes dozens of small landlords and realtors. AB1506, the Costa Hawkins Repeal bill which was introduced earlier this year and is a two-year bill, would stop the ban on rent control for single family homes, homes built after 1995 and the ban on vacancy control.

This event was part of a statewide day of action of families in dozens of cities across the state, who have been organizing locally for rent control, tenant protections and affordable housing.  In LA, endorsers of the rally include the LA Tenant Union, Unión de Vecinos, Alliance of Californians for Community Empowerment (ACCE), Strategic Actions for a Just Economy (SAJE), and Tenants Together. (see calendar for contact info and meeting dates and times for LA Tenants Union).

If you enjoyed this post, please consider leaving a comment or subscribing to the RSS feed to have future articles delivered to your feed reader.
By Change-Links|2017-07-28T16:32:36-05:00July 28th, 2017|Anti-capitalism, Anti-Racism/Racism, Banks, Capitalism, Economy, Events, Homelessness|0 Comments