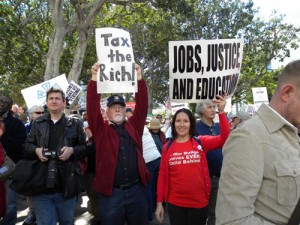 The US government budget deficit is now $1.5 trillion, and most states are running out of money too.  Political leaders are wringing their hands and crying in unison:  “There’s just no money.”  Led by Republicans, the only solution, they say, is to cut, cut, cut.  They’re on a slash and burn rampage, pushing draconian cuts in education, health care, pensions, public workers, Social Security, Medicare and nearly every other needed social program and social service job.

Republicans have launched an all-out attack on unions – the one social group that has had the influence to achieve and protect these social programs.  Wisconsin public workers are on the front lines in this battle.  Scott Walker, recently elected Republican and Tea Party Governor, is out to crush public sector unions in Wisconsin, claiming their pensions are breaking the bank.  Workers’ pensions are not the cause of the economic crisis hitting Wisconsin, nor are they in 45 other states suffering from shortfalls in their budgets.

Fortunately, Wisconsin’s unions and the public have responded with huge demonstrations at the state capitol in Madison and a recall campaign of key Republicans, and Democratic lawmakers left the state to prevent the anti-people legislation from being voted on.  But Wisconsin Republicans skirted existing rules and long-held practices and voted without the Democrats present to take collective bargaining rights away from Wisconsin public workers.  This is just the beginning.  Republicans in Ohio, New Jersey and a host of other states are pushing similar anti-labor legislation in their state houses.

How can there not be enough money in the richest country in the world for needed social services when practically every other industrialized country funds them?  Actually, there’s tons of money.  Billions and trillions of dollars.  The problem is that it isn’t in government bank accounts because the giant corporations and the rich have taken it.  The sales pitch from the Republicans, their financiers, and their mouthpieces in the corporate media have turned this reality upside-down.  There is also tons of US government money being wasted.  The biggest waste, financially and in lives, is the over $1 trillion spent on unpopular wars in the Middle East.

There is no way the rest of us can make up the difference.  The only solution is to get money where there is a lot of it, and without hurting anybody.  We must significantly raise the taxes on the very rich.  These millionaires and billionaires, and the giant corporations and banks live better than kings because they’ve hogged so much wealth from our nation and others.  In 2007, 400 of the wealthiest people in the US owned $1.5 trillion of wealth (the same as our entire national debt today), which is more than the “bottom” 90% of us own.  Along with the 7.8 million people who are millionaires, a tax increase on both groups could stop the financial hemorrhaging.

At one time, corporations and the rich paid at least a good chunk of their fair share of taxes.  From WWII until 1960, the individual tax rate for wealthy Americans was 91% for most of that time, under Franklin Roosevelt, a Democrat, and Dwight Eisenhower, a Republican.  Today, in 2011, the top rate for very rich individuals is 35% (put into effect by George Bush, a Republican), but is actually much lower for many due to the proliferation of tax loopholes.  In the 1950’s corporations paid a basic tax rate of 53%, and our economy was booming.

No longer.  Corporations in 2011 are taxed at between 15% – 39% based on “taxable” income.  But many corporations pay a much lower percentage because of the proliferation of corporate deductions, exemptions, and even tax refunds.  Even with these great savings, US corporations scream that their tax rates are too high for them to compete in the global economy; yet their tax rate was lower than 24 other countries in the world in 2008, according to Citizens for Tax Justice.

Corporate America has been on a half-century campaign to slash corporate and individual taxes on the rich, and they’ve been hugely successful.  That’s a major cause of our problems today.  Some of the most right-wing companies and their owners, like the billionaire Koch brothers of Koch Industries (who fund the Tea Party movement), want to eliminate both corporate and individual income taxes altogether.  Apparently, they could care less whether the public school system and other services survive.

But other giant corporations have cut their tax payments to our government to zero, and some have even received refunds from the IRS.  One is Exxon Mobil.  It paid no taxes to the IRS in 2009, and received $156 million refund.  Exxon Mobil CEO Rex Tillerson got over $27 million in personal compensation in 2009.  He makes in less than ten days what an average Exxon Mobil worker would take a lifetime to make.  Exxon Mobil is only one of many big corporations who pay little or no taxes to our government.  This is a product of how our capitalist system functions.

Corporate executives also make big financial contributions to both major political parties and their candidates, but especially Republicans, and they expect something in return for these political investments.  Exxon Mobil gives 91% of its political contributions to Republicans, so it is little wonder that Republicans reward their corporate sponsors by attacking unions, public workers’ pensions, Social Security, and Medicare.  And, too many Democrats, including Obama, have, so far, been more concerned about pleasing Wall Street, and not fighting for workers.  Obama’s recent budget deal with House Republicans gave more tax cuts to millionaires, billionaires and their corporations, and program cuts for the average American — and without bringing the American people into a fight to stop it.  That is hardly a good re-election strategy.  Millions of Americans are barely surviving now.

Charles and David Koch, the Tea Party’s wallet, are worth $21 billion each.  Their goal, based on the agenda of their right wing, anti-labor think tank, the Cato Institute, is to eliminate all unions from the US.  If they are successful, that would be the end of the major defender of all these social programs.

The war on Wisconsin public workers and their unions is the latest escalation in the corporate war on workers and the American people.  The Koch brothers are among the major drivers of this ruthless campaign, and growing numbers of organizations are working to stop them.  Common Cause, for one, was the initiator of a big protest demonstration against the Koch Brothers in Rancho Mirage, California on January 30, 2011.  Other groups are going after Koch Industries for its terrible pollution of the environment, and some are raising the possibility of boycotts and other forms of resistance.  On February 26, 2011, unions and their community supporters in every state capitol, and in Los Angeles and other big cities, held rallies in support of workers rights and in defense of public services in Wisconsin and every other state.

We must keep this up by bringing these issues into other political campaigns, and by raising the demand to increase taxes on the very rich as the major solution to our budget problems.  Also, where possible, we should help strengthen our unions by helping them bring more workers into their organizations to improve pensions and wages for growing numbers, while resisting the corporations’ campaign to pit us against one another to see who will give up more in a race to the bottom.  Finally, we have to support efforts to end the wars in the Middle East, which has cost us over $1 trillion to date, and transfer that money to social programs.  This is a plan that can fund every needed social program, resolve our budget shortfalls, and set our country on the path of fairness and well-being for the American people.

Cutting workers’ pensions and destroying their unions won’t balance any budget.  Raising the tax rate on millionaires and billionaires, and on big corporations and banks, will.

If you enjoyed this post, please consider leaving a comment or subscribing to the RSS feed to have future articles delivered to your feed reader.
By John Johnson|2011-08-01T13:59:14-05:00August 1st, 2011|Commentary, Democracy, Editorial, Human Rights|0 Comments