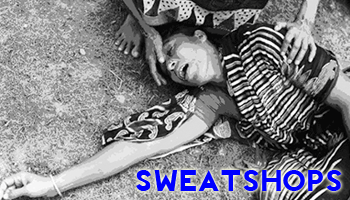 There is no single definition of what a sweatshop is. The US Department of Labor defines a sweatshop as a factory that violates two or more labor laws, such as those pertaining to wages and benefits, child labor or working hours. In general, a sweatshop can be described as a workplace where workers are subject to extreme exploitation, including the absence of a living wage or benefits, poor working conditions, and arbitrary discipline, such as verbal and physical abuse. Since sweatshop workers are paid less than their daily expenses, they are never able to save any money to improve their lives. They are trapped in an awful cycle of exploitation.

Defenders of sweatshops often bring up the fact that even though sweatshops are bad, they at least give people jobs they wouldn’t have had otherwise. However, the type of jobs sweatshop workers receive are so bad that they rarely improve their economic situation.

For more information on what a sweatshop is, I encourage you to read https://www.coopamerica.org/programs/sweatshops/whattoknow.cfm

What to Know about Sweatshops by Green America https://www.globalexchange.org/campaigns/sweatshops/sweatshopsfaq.html

Frequently Asked Questions: “Free Trade” and Sweatshops by Global Exchange. These articles give a very good overview of what a sweatshop is and why sweatshops simply aren’t acceptable. Child Labor

The International Labor Organization (ILO) has estimated that 250 million children between the ages of five and fourteen work in developing countries. 61% in Asia, 32% in Africa and 7% in Latin America. Many of these children are forced to work. They are denied an education and a normal childhood. Some are confined and beaten. Some are denied the right to leave the workplace and go home to their families. Some are even abducted and forced to work. Which products are made in sweatshops?

All kind of products can be made in sweatshops.

Some of the biggest problem industries are:

Clothing
Clothing is very often made in sweatshops and with the use of child labor. In the U.S. the majority of garment workers are immigrant women that work 60-80 hours a week, usually without minimum wage or overtime pay. Overseas, garment workers routinely make less than a living wage, working under extremely oppressive conditions.

Rugs
A lot of child labor is used in the rug industry. Nearly one million children are illegally employed making hand-knotted rugs worldwide.  Approximately 75% of Pakistan’s carpet weavers are girls under 14.

Toys
A lot of toys are made in sweatshops and by child labor. Especially toys made in countries like China, Malaysia, Thailand or Vietnam. The average North American toy maker earns $11 an hour. In China, toy workers earn an average of 30 cents an hour.

Chocolate
43% of cocoa beans come from the Ivory Coast where recent investigators have found child slavery. In addition, cocoa workers who are paid, receive wages that leave them at the edge of poverty and starvation.

Banana
Banana workers are some of the most exploited workers in the world. They have to work long hours, get low pay, are forced overtime and are exposed to dangerous pesticides.

Coffee
Coffee is the second largest US import after oil. Many small coffee farmers receive prices for their coffee that are less than the cost of production, forcing them into a cycle of poverty and debt. What do workers want?

Workers need to be paid a living wage, enough to meet their basic needs and to enable them to plan a better future. They need to be educated about their rights, including local labor laws. They also need the opportunity to achieve an education for themselves and their children. And workers need to be able to freely associate and advocate for rights and improvements to their working conditions, pay and benefits without fear of reprisal. Outside of the factories, they should have the right to form cooperatives or worker-owned enterprises in their communities.

Monitoring Problem
Most factories are monitored by inspectors who are paid by the industry. Often, they’ll call ahead to arrange a visit. This will give the factory management time to make the place look nice, get rid of the child workers and coach the workers about what to say.

How can we end sweatshops?

There needs to be full public disclosure. Companies must disclose the treatment and pay of workers and how and where products were made. This disclosure needs to be backed with independent monitoring of working conditions and pay. Violations that are discovered must be corrected in a way that protects workers and their jobs. This includes paying for education for child workers found in factories and paying parents a living wage.

If you enjoyed this post, please consider leaving a comment or subscribing to the RSS feed to have future articles delivered to your feed reader.
By John Johnson|2013-06-04T02:49:33-05:00June 4th, 2013|Featured|0 Comments