On Saturday past, hundreds of Palestinian political prisoners announced a stunning victory against the repressive conditions in Israeli prisons.

After Israeli prison officials granted some concessions, a majority of Palestinian prisoners who had engaged in a huge hunger strike, called off the 40-day action.

According to these officials, some 1,578 prisoners joined the strike, and 834 ended it on Saturday, the beginning of the holy month of Ramadan. Eighteen others were hospitalized.

The hunger strike was led by Marwan Barghouti, a political prisoner who has been held by the occupation forces for 13 years, and also a commander of the Palestine Liberation Organization.

The prisoners were protesting poor food, overcrowding, denial of educational opportunities, better medical care, and an end to solitary confinement.

Another key demand was an end to what Israeli officials term administrative detention — or confinement without trial or even a charge. The Palestinian prisoners prevailed on all these points.

The hunger strike, called “Strike for Dignity and Freedom” was a bold political action against the Israeli apartheid state.

The Palestinian prisoner support network, Samidoun, praised the prisoner hunger strikers for their steadfastness, and saluted their victory. They also seriously critiqued the International Red Cross (IRC) for its failure to support a second monthly family visit, citing budgetary concerns.

Samidoun and other Palestinian supporters praised the prisoners’ action, and noted that Israel holds some 6,000 Palestinian prisoners, including children, illegally.

More information about Mumia’s successful struggle to get the state of PA to administer Hep-C treatment to him and thousands of other prisoners, and about his latest struggle for a new trial and freedom, see: 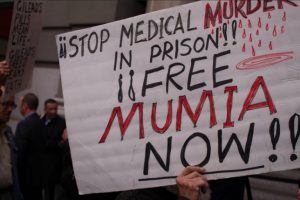 If you enjoyed this post, please consider leaving a comment or subscribing to the RSS feed to have future articles delivered to your feed reader.
By Change-Links|2017-07-01T23:02:25-05:00July 1st, 2017|Anti-Racism/Racism, Heroes and Whistleblowers, Independent Journalism, Movements, Mumia Abu-Jamal, Palestinian|0 Comments