In the words of her Veteran For Peace colleagues, “Kathleen is one of those people who is always there to do what needs to be done.” She has worked tirelessly for VFP and social justice, bringing her passionate commitment, energy, persistence, and impressive skills to an endless array of campaigns, actions, coalition building, conferences, lobbying…the list of Kathleen’s organizing work for peace and justice goes on and on.

From Camp Casey to New Orleans to Washington to Colombia, Arlington West, outreach to GI’s and veterans, truth in recruiting, risking arrest, serving on boards and committees, tackling the difficult organizing tasks, Kathleen is always there with her exceptional commitment to the mission. In 2010, Kathleen co-founded the MLK Coalition of Greater Los Angeles.

Kathleen’s activism began during the Viet Nam war at age thirteen attending protests in Los Angeles. Her upbringing shaped her outlook and the political and social upheavals of her youth first propelled her into activism. At the age of sixteen, Kathleen was part of a team that founded SMASH: the Santa Monica Alternative Schoolhouse. After graduating, she traveled extensively in Latin America for several years and upon returning to the US she started hearing about Chile and the disappeared, and then Blase Bonpane of Office of the Americas speaking at CAL State Northridge about the death squads, Oscar Romero and the peace delegations to Central America.

Becoming an organizer did not happen overnight but instead developed and evolved along with self-confidence as an activist. As a community organizer, she has put together non-violent direct action training seminars, peace and justice events and actions. She has served as a Board Member and Treasurer of Veterans For Peace Los Angeles Chapter, Board Member of Topanga Peace Alliance and co-founder of MLK Coalition of Greater Los Angeles and is a co-founder of Topanga Youth Services; a community response to vandalism by underserved youth.

Having received a BA in Liberal Arts – Bilingual/ Bicultural emphasis from Cal State Northridge she began teaching elementary school while attending Pacific Oaks College, based on Paulo Freire’s pedagogy and popular education model. It wasn’t until she attended Pacific Oaks College that she truly began to understand the dynamics of activism as a means for change.

She became more conscious of not only the need for change, but also the mechanisms to achieve it. At the same time, she was raising three children.

With the onslaught of 9-11-2001 and the ensuing warmongering, like many others Kathleen was in the streets protesting imperialistic wars. During that time, she began volunteering with Veterans For Peace erecting a memorial at the Santa Monica Beach on the human cost of war. The following summer of 2005, Kathleen received a call from Woody Hastings and June Brashares urging VFP Los Angeles to take the memorial down to Crawford, Texas to support Cindy Sheehan’s demand to Bush of “What is the noble cause?” 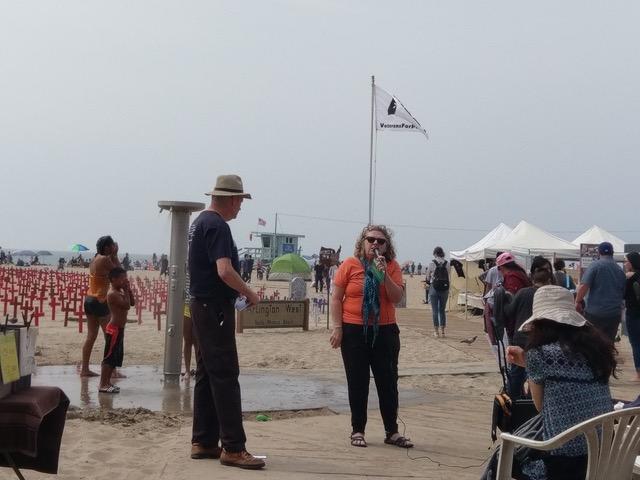 Within fourteen hours of that initial call, the three of them were in a donated truck, with a donated gas card, towing 500 crosses across the country to Crawford. What a whirlwind! They had no idea they would be driving along I-40 halfway to Texas. Kathleen says; “We didn’t know anything about Crawford except that it had a ditch full of people questioning “What noble cause?” We had no plan for food, where we were going to stay, what we were going to do. It was just a time when the US was electrified by a mother’s anguish. I could have easily not done it. It broke up my visit with my daughters. I had no idea during that first call from Woody how in the hell we were going to manage to jump in a truck and get from Santa Monica to Crawford, Texas let alone transport a memorial, or where we would even go, once we got there. I was the one charged with figuring out how to erect the crosses in a mud- infested ditch. It was a leap of faith, step by step all the way there.”

If you enjoyed this post, please consider leaving a comment or subscribing to the RSS feed to have future articles delivered to your feed reader.
By Change-Links|2019-03-03T03:30:45-05:00March 3rd, 2019|Activism, Features, Heroes and Whistleblowers, Historical, Human Rights, Latin America, Security and Insecurity, Solidarity, Venezuela, Veterans|0 Comments