by Antonio Zavala [translated from ElBeisman.com]

Spanish-speaking media activists fear that under the Trump administration, attacks will begin on the media in Spanish, as indicated by a recent closure of a program in Spanish on the west coast.

The management of KPFK suddenly closed – without warning – the program Es Nuestra Cultura that Xalli Algo has produced for five years. When ordered to vacate the booth on February 28, the Mexican radio announcer Xalli Algo supposedly refused, and the manager of the radio station called the police. She was arrested and taken to the police station. There she asked to have an interpreter but was denied.

On March 4, a press conference was held and Algo expounded her views on the incident. She even complained about being sexually harassed by the North Hollywood police. “I am an immigrant, a Mexican citizen living in exile for more than a decade,” Algo said. “I am an international reporter and an activist alike.”

The broadcaster said that her experience was traumatic because she was arrested, transported to the police station and detained for hours. “I was locked in a cell where there was vomit on the floor and blood on the walls,” added Algo. She commented to ElBeiSMan.com that she had been broadcasting for five years for KPFK part of the Pacifica Radio Network.

The Mexican said she believes her experience is the result of racism and sees her case as a warning to the other Spanish-speakers who work at KPFK to keep quiet. Algo added that they only closed her program so far. “The threat of cancellation has been dormant since the last general manager, Leslie Radford, was illegally fired,” Algo said. “Under Radford’s administration it was made possible to add five more hours to the programming in Spanish. Those five hours had already been approved more than five years ago, but each administration, along with the local and national board, blocked them and did not allow them to be implemented.” [Shortly after Radford finally implemented the policy, she was removed by a new interim executive director of Pacifica, and the policy was reversed by the national board.] 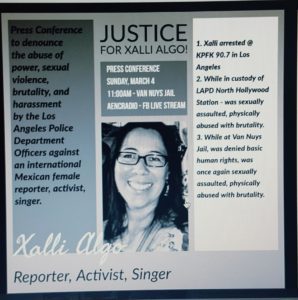 Regarding her arrest, in which she claims that she was sexually abused by a female police officer, the announcer said she is considering filing a lawsuit against the North Hollywood division of the LAPD. “On February 28, 2018, I was unlawfully and unfairly reported to the police by Anyel Zuberi Fields, the new general manager of KPFK. [He] called the police and told them to arrest me at my job site, claiming that I was trespassing after I spoke out against irregularities that happened at the station,” Algo said at the press conference.

“The situation of Xalli Algo, the producer at KPFK radio, is a sample of how a government like Trump’s influences the rest of society,” said Manuel Revueltas, a human rights activist in Chicago. Revueltas said he was informed of the setbacks that Hispanics have encountered at that station over the past few years in their efforts to inform the public in Spanish.

“What is the fear they have of the [Spanish-language] announcers?” Revueltas asked, and added:  “Unfortunately, this got to the point that the administration of the KPFK station involved the police, resulting in an alleged case of sexual violence against Xalli. ”

Revueltas called for an examination of the way the local KPFK administration works in Los Angeles to avoid future cases of harassment such as Xalli and improve Spanish-language programs so that Spanish-speaking radio listeners benefit.

Antonio Zavala, author of the book Pale Yellow Moon, is a writer and journalist. It covers news about the social movements of the Hispanic communities in the Chicago area.