Sham “Police Reform” on May Ballot as Measure C

Sham Reform at Police Commission and on May Ballot

In the face of continuing and growing community outrage, led by Black Lives Matter, the Stop LAPD Spying Coalition, the LA Community Action Network and others, the LAPD has persisted in being most murderous police dept. in the country, backed by the police commission, the mayor and City Council, and the DA and City Attorney, who have stonewalled all demands to fire police chief Charlie Beck or otherwise hold killer cops accountable.

Now the Police Commission and Mayor, backed by the LAPD brass and the cops’ “union,” have put forward two phony reforms, pretending that they represent “reform” and “civilian oversight.” At a meeting in late April, the LAPC unanimously approved a policy that claimed to promote “de-escalation” by officers, but actually had no language about de-escalation in the actual policy, and therefore no ability for the Commission to rule a police shooting or killing “out of policy” on grounds that the officers involved did not properly “de-escalate” the confrontation that resulted in the shooting. Commissioner Cynthia McClain-Hill, embarrassed by the exposures by the ACLU and the outrage voiced by family members of those killed by LAPD and their community supporters, attempted to put forward a weak motion calling on the LAPC to continue to consider the matter, and failed to even get a second for her motion. 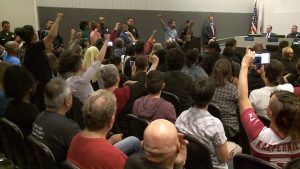 Even worse, the Mayor and others are funding a ballot initiative campaign for “Measure C”, pretending it’s about “civilian oversight,” when the measure was actually promoted by the cops’ union to give them an alternative, more lenient hearing board that can review and overturn any discipline the police chief might propose. (They currently get to appeal any finding by the LAPC or chief to a “Board of Rights” composed of two officers and one non-officer. The non-officers are consistently more lenient, and the new body would create an alternate panel, at the option of the cop charged with misconduct, composed entirely of such non-officers (vetted by the rubber-stamp LAPC). LA CAN, numerous community groups and even the LA Times have come out Measure C, which unfortunately has no counter-argument on the May 13 ballot.