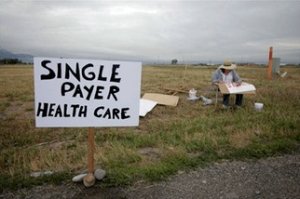 Corporate Health Insurance and Big Pharma along with Big Oil have funded, populated and organized the attacks on Democratic Town Halls, on Health Care Reform and on Climate Change Bill. Threatening people with guns, no health care and poisoned air. We have to FIGHT BACK

We Need Your Support To Keep This Progressive Voice Alive. We feel it’s important to get this voice out to as wide a community as possible. We distribute to almost 200 venues in Southern California. We Need your help and your large and small donatons, ASAP.

Getting Away With Torture Holder’s Limited, Modified Hangout By Dave Lindorff