Sept. 11, 2001 is now farther in the past than the atomic bombing of Hiroshima and Nagasaki were when the U.S. began escalating its aggressive military role in Vietnam. A full generation has come age since “9-11”; about 20% of the US population has been born since the US government responded by launching the War on Terror. US military doctrine has moved past that war to gear up for the next one, projecting Russia and even more so China as state adversaries and threats. Yet clandestine and uniformed US forces including Africom and the CIA, along with their NATO allies, continue to wage war against various Islamic, nationalist, and left insurgencies in Africa and Asia.

The Pentagon budgets and plans on the basis of fighting “two-and-a-half” wars, and the US is aggressively militarizing space simultaneously with maintaining troops and operations in every country in Africa with the exception of Eritrea, funneling billions into a proxy war with Russia in Ukraine, and engaging in provocative naval operations near China and political provocations with Taiwan. The energy, tech, financial, and industrial economy in the US are all shaped by the imperatives of the war machine.

There was another September 11 written with blood earlier in history, Sept. 11, 1973, when the US-backed coup by Gen. Augusto Pinochet overthrew the elected government of Socialist President Salvador Allende and Popular Unity in Chile. This ushered in the era of neo-liberalism with a military coup, executions, and police state repression. It has taken the Chilean people nearly a half-century to overturn that dictatorship and its repercussions, with the election of new leftist president and the adoption of a new constitution.

Across Latin America, despite US efforts to destabilize governments in Venezuela, Nicaragua, and Cuba, and to back parliamentary coups and right wing regimes in Bolivia, Brazil, and elsewhere, left-leaning movements and parties are in or near power on most of the continent. This “pink tide,” however, must learn from the US-instigated and organized overthrow of Allende. Electoral gains within existing parliamentary system, are threatened by opposition from a reactionary elite with allies in the military and the backing of the US empire and its clandestine and cultural forces. Parties and governments professing to move “towards socialism” must rely on, incorporate and unleash the militant organization and solidarity of the vast poor and oppressed majority, especially indigenous and African-descent people.

Prior to the September 11, 1973 US-backed coup in Chile, I participated in NICh -Non-Intervention in Chile, a national effort in the US to oppose what ultimately occurred. Subsequent to September 11, 2001, I have worked in  Interfaith Communities United for Justice & Peace (ICUJP), which is sponsoring its George Regas Peacemaker awards event on Sunday, Sept. 11, 2022 (see announcements elsewhere in this issue). Had US solidarity and anti-imperialist efforts been stronger and more capable of undermining US militarism, aggression and clandestine destabilization efforts in the 1970s, the history of Chile and the world might have been very different. Had the resistance to the US “War on Terror” and invasions of Afghanistan and Iraq been more effective, think of how many lives needlessly lost to bombardment and sanctions might have been saved.

The challenge to step up and alter the course of history is before us again and always in the current moment. We must build a movement capable of shutting down the US war machine, and ending the militarization (and privatization) of space. We must develop the capacity to overcome the drumbeat of corporate media propaganda for NATO, ground the drones and the other aspects of war by robots and automatons that the US is pursuing, and finally uproot the system of capitalist settler-colonialism that is addicted to war. 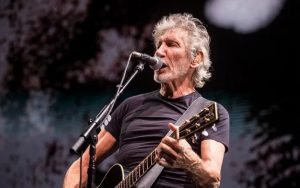 One step in that direction is the national tour by Roger Waters of Pink Floyd, a proponent of freedom for Julian Assange. For his courage, Waters has been targeted by right-wing nationalists in Ukraine, backed by US intelligence (see https://covertactionmagazine.com/2022/08/29/roger-waters-added-to-ukrainian-hit-list/). Waters has invited peace groups at every city on his tour to participate and table. Change Links and ARA-LA will be there when he appears at Crypto.Com Arena (formerly  Staples Center) on Sept. 27 and 28. Come join us!