Lessons from the Great Steel Strike of 1919,  and Remington-Rand Strike, 1937

100 years ago, steel workers decided to strike. The issues were on the side of the strikers. They worked 84-hour weeks under dangerous conditions. Polls indicated that public opinion was on their side in the beginning.

The owners were anticipating a strike soon after WWI ended. They made huge profits during the war. US Steel earned 1000% return on investment. They intended to parlay these profits against the steelworkers.

They had other advantages as well. The nation was in a conservative mood coming out of both WWI and US troops invading the Soviet Union after the Russian Revolution. Plus, unlike the strikers, they didn’t have to contend with ethnic hatreds (Serbians and Italians, for one), or animosity between unions. The owners were all on the same page.

Most of all, though, owners possessed a secret weapon in the form of propaganda. Pres. Woodrow Wilson assembled the Committee on Public Information (CPI) shortly after his reelection, to persuade a war-leery US public to accept sending troops to Europe. Via the most advanced technology of the day, an army of public speakers called the “Four Minute Men” it whipped the public into a jingoistic frenzy. Business anxiously awaited the end of the war to use propaganda for its own interests. This marked the first time it was used against unions.

There were other techniques unions hadn’t seen before.

This proved too much for the strikers. The strike lasted four months. By early 1920, most strikers had returned to their jobs without winning a single concession. They lost the propaganda battle, too. Polls showed at the end of the strike public opinion was on the side of the steel owners. 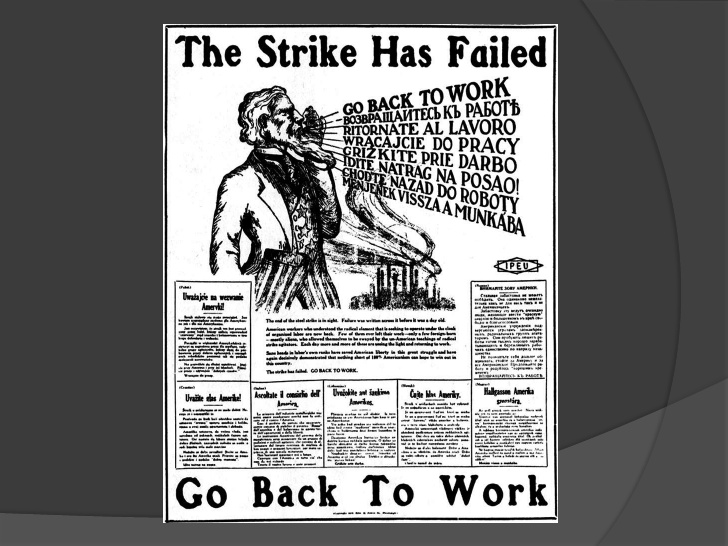 The outlook for the labor movement was not rosy in the early 1920s. Many union leaders were living in exile. Eugene Debs was in jail, his health failing. Union organizing ground to a standstill and stayed there until the onset of the Great Depression.

The depths of the Great Depression seemed a better time to strike. Unlike 1919 there was no Red Scare and it was permissible to talk openly about public ownership, socialism and even communism. Franklin D. Roosevelt was in the White House and Francis Perkins was Secretary of Labor. Both could safely be called “pro-labor”. In addition, Remington-Rand did not appear as formidable as the steel owners.

Unbeknownst to the AFL-affiliated strikers, however, James Rand had just created the Mohawk Valley Formula, which would become employers’ bible for strikebreaking. Nor did the strikers know that the National Association of Manufacturers (NAM) was financing the strike-breaking behind the scenes.

The unions had experienced violent strikes before but did not expect one this time. Yet Rand also hired Pearl L. Bergoff, undisputed leader of strikebreaking. Bergoff led 150 bat-waving scabs into Rand’s Ohio plant in what turned out to be the bloodiest strike in many years.

Perhaps the most devastating of Rand’s tactics was its use of “misinformation”:

The National Labor Relations Board/NLRB described the Mohawk Valley Formula as a “Manifesto for industrial warfare” and in a later decision ordered Rand to let replacement workers go. Rand appealed and ignored the decision until the Supreme Court refused to hear the case.

The strike lasted longer than the Great Steel Strike but that was about the only difference in the end. From this point on violent strikes became fewer and farther between. Manipulating public opinion via propaganda became the weapon of choice for employers.

The NAM continued doing research even after the US entered WWII. According to one report if all the printed material produced by NAM were stacked up, it would form four stacks the height of the Eiffel Tower. After the war NAM shifted its attention to flipping Congress Republican and succeeded in the 1946 elections. In June of 1947 the new Congress passed the Taft-Hartley Act, the most anti-union piece of legislation in US history.

Taking the Risk Out of Democracy, Alex Carey

History of the IWW, Jeremy Brecher

If you enjoyed this post, please consider leaving a comment or subscribing to the RSS feed to have future articles delivered to your feed reader.
By Change-Links|2019-09-05T17:04:26-05:00September 5th, 2019|Activism, Anarchism, Capitalism, Historical, Labor|0 Comments