Result of the Occupy Movement ? 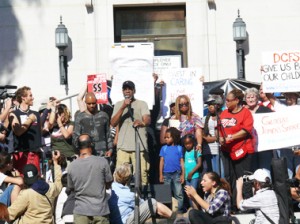 What Will Be the Result of the Occupy Movement ?

It’s the end of Saturday, October 15, 2011.  After spending the past two days and nights at Occupy L.A., which now boasts hundreds of tents completely surrounding downtown Los Angeles City Hall with a wish list including 50+ tent requests to date, I have driven 15 minutes south to the oasis of the UnUrban Coffee House in Santa Monica – a beacon of light, an avant-garde hangout, an ultra-cool, down-home hood of the DIY’ers operated by cause/creative entertainment benefactor and all-around philanthropist-entrepreneur Pamela Stollings and her staff.  It is here that Los Angeles supporters of Stop the Machine – Create a New World at Freedom Plaza in Washington D.C. had called for a gathering with artists and speakers four weeks ago.

Positive Support – The speakers tonight included Ron Kovick , war veteran, peace activist, and author of the book Born on the Fourth of July which inspired a famous movie of the same title; Arlene Inouye, founder of Coalition for Alternatives to Militarism in Our Schools; Michelle Cohen, director of the Great Futures Project; and Kwazi Nkrumah, founder of and spokesperson for the Martin Luther King Jr. Coalition for Jobs, Justice, and Peace.

Michele had actually been present in recent days at the on-going Freedom Plaza occupation, and Kwazi has been one of the facilitators helping to initiate and sustain Occupy L.A. .

All the speakers spoke in support of  the encampment next door to Santa Monica around L.A. City Hall, and the marches, workshops, committee meetings, general assemblies and other actions that are taking place there.  In glowing terms, they noted the needs of society being examined by occupiers; the positive and innovative social environments being created within the occupations; the willingness to abandon comfort and convenience in search of truth and dreams; the open and free sharing of skills, ideals & information; the openness of the youth to accept the elderly without resentment of the past generation’s leadership failures; the example being shown to “get off one’s butt” and take a stand in support of the good against the evil which appears to control the world and our country.

Anger at Financial Industries – The occupation movement in the USA is well-known for its occupation of “Liberty Plaza” near Manhattan which began in September, 2011. The NYC movement is outspoken about the legally-sanctioned greed and corruption that operates with impunity on Wall Street.  Much media content focuses on the professed lack of clarity and definition of occupiers’ demands.  Signs like “We are the 99%” and “Eat the Rich!” denote occupier concerns about economic disparity.   Describing this aspect of occupy movement concerns, Walter Brasch recently observed the following details:

“The protestors are fed up with corporate greed that has a base of corporate welfare and special tax benefits for the rich. … They’re mad that the home mortgage crisis, begun when greed overcame ethics and was then magnified by the failure of regulatory agencies and the Congress to provide adequate oversight, robbed all of America of its financial security. During the first half of this year alone, banks and lending agencies have sent notices to more than 1.2 million homeowners whose loans and mortgages are in default status, according to RealtyTrak.  …  During the past decade, corporations, which have paid little or no federal taxes, have outsourced at least 2.4 million jobs and are hoarding trillions which could be used to spur job growth and the economy. …  They’re mad that corporations that took federal bailout money gave seven-figure bonuses to their executives.  They’re mad that the U.S., of all industrialized countries, has the highest ratio of executive pay to that of the average worker. The U.S. average is about 300 to 475 times that of the average worker.  They’re mad that 47 percent of all persons who earned at least $250,000 last year, including about 1,500 millionaires, paid no taxes, according to Newsmax.”

Greed That Knows No Bounds – However, this greed and corruption of concern operates far and beyond the boundaries of the stock exchange, hedge fund gambling, and super-inflated CEO bonuses.  Our society is literally falling apart as social services get slashed indiscriminately so that the rich do not have to pay their fair share, and “unending war” is being waged against third world countries as arms manufacturers, mega multinational corporations such as the oil giants, private contractors supporting the military under “cost plus” contracts that were not bided upon, and other co-conspirators of the military-industrial complex reap monstrous profits.  This despicable state-of-affairs is caused by the same greed and corruption as commodity manipulations and the millions of home foreclosures orchestrated by the sub-prime mortgage debacle, with most perpetrators of harm to our economy and our citizens going unpunished.

Promising Signs – I’ve been to five “occupation” sites to date, Freedom Plaza and McPherson Square in Washington, D.C. and Occupy L.A., Occupy Los Angeles Unified School District, and Occupy Venice in Southern California (Occupy Long Beach and Occupy Riverside interrupted and Occupy Orange County pending, we are told).  Their “occupational similarities” are significant: a dislike for authoritarian structures and methods;  encouragement for active participation from all attendees, including the taking on of responsibilities (one sign in D.C. read, “ There are no leaders; if you see something that needs to be done, Do It ! ”; an eagerness by many people to engage in educational workshops, sign making, marches and protests, direct action and risking arrest; the willingness to attend long, drawn-out meetings where anyone interested in speaking is given the chance to do so; the use of facilitation and consensus in processes of decision-making and sustaining group direction “.  Many mainstreamers do not know what all of these concepts entail, much less engage in them regularly.  For the experience, go to your local, non-violent occupation of public space today !

Beyond Reform – Create ANew Society – It seems to me that there is a conscious and concerted attempt by the occupy movement to demand the creation of a new society.  Aware of the greed and corruption that exists and controls the upper levels of business and industry, government, finance and banking, education, health care and its insurance, and the media in no uncertain terms, occupy participants are consciously making the decision to engage in non-violence and “live the change they wish to see in the world”.  By observation, I surmise that the revolution is alive, well, and growing.  What will determine its success in part is its ability to sustain itself over the long run, through non-diminishing commitment and by continuing to attract and obtain the growing interest and involvement of our entire, diverse population.