On January 20, 1981, at Reagan’s inauguration, thousands of outraged Black residents of DC and a national mobilization of anti-Klan activists dispersed a congratulatory victory rally by the Ku Klux Klan. 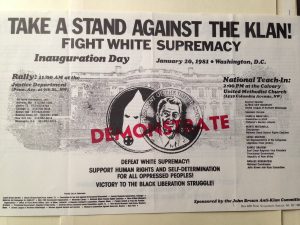 On January 20, 2001, tens of thousands of protesters lined the inaugural route and demonstrated outside the Supreme Court to protest the selection on George W. Bush.

And on January 20, 2017, protests are planned in Washington DC and around the country against the Trump regime as part of a growing anti-fascist resistance.

In DC, several actions are planned. ANSWER and Workers World Party are both mobilizing separately to DC, and a national coalition of anti-fascist and anarchist groups is calling for a #DisruptJ20 mobilization, (see http://www.disruptj20.org) with actions around the country simultaneously. The DisruptJ20 call declares:  “If Trump is to be inaugurated at all, let it happen behind closed doors, showing the true face of the security state Trump will preside over. It must be made clear to the whole world that the vast majority of people in the US do not support his presidency or consent to his rule. Trump stands for tyranny, greed, and misogyny. He’s the champion of neo-nazis and white Nationalists, of police who kill the Black, Brown and poor on a daily basis, of racist border agents and sadistic prison guards, of the FBI and NSA who tap your phone and read your email. He’s the harbinger of even more climate catastrophe, deportation, discrimination, and endless war. He continues to deny the existence of climate change, in spite of all the evidence, putting the future of the human race at stake.”

It goes on: “Trump’s success confirms the bankruptcy of representative democracy. Neither the Democrats nor any other political party or politician will save us—they just offer a weaker version of the same thing. If there’s going to be a positive change in society, we have to make it ourselves, together, through direct action… We must take to the streets and protest, sit in, walk out, rise up, and make more noise and good trouble than the establishment can bear. We must delegitimize Trump and all he represents. It’s time to defend ourselves, our loved ones, and the world that sustains us as if our lives depend on it—because they do.”

People close the RCP have initiated a call to refuse fascism, signed on to by Bill Ayers, Robin D.G. Kelley, Cornel West, Casey Iron Eyes and others (see http://www.refusefascism.org). They are organizing for immediate action. “We, the undersigned, know …the catastrophe that will befall the people of the world should the Trump/Pence regime assume full power. We therefore call for a month of resistance beginning December 19, reaching a crescendo by January 20.” The call continues, “Our resistance must spread rapidly to every sphere and every corner of the country. Because we refuse to accept a fascist America, millions must rise up in a resistance with a deep determination such that we create a political crisis that prevents the Trump/Pence fascist regime from consolidating its hold on the governance of society.” They have a New Year’s Eve protest scheduled at 6 PM outside Breitbart HQ on Wilshire Blvd, marching into West Hollywood.

Here in Los Angeles, a student walkout is planned at UCLA on January 20 (see facebook.com/events/606935186179922/) as part of a national student boycott against bigotry and hate, on January 20 to demand:

– No deportations of undocumented immigrants!

– Fight discrimination and violence against the LGBTQ community!

Protests must be seedbeds and stepping stones to deeply rooted, organized permanent resistance, community self-defense efforts, and direct action to meet human needs, defend human rights and protect the environment. AltoTrump (http://www.altotrump.com) is one such effort to build popular assemblies (asamblea popular) in various base communities (on the liberation theology model) in Boyle Heights/ELA, Highland Park, Echo Park, South LA/Inglewood, the San Fernando Valley and Orange County. They have been meeting regularly since November and have endorsed the Jan. 20 March Against Hate from Olympic & Broadway (see above). Nationally, another such effort is at http://www.Ungovernable2017.com, initiated by Malcolm X Grassroots Movement, Al-Awda (Palestinian Right of Return) and others, calling for actions in Atlanta, New York, Little Rock, Jackson MS and Washington DC on Jan. 20. They declare: “We pledge to create a resistance movement that makes Trump unable to govern our oppression; unable to deceive the people, to make the people accept his reign of hatred. We refuse to give hatred a chance to govern, a chance to roll back civil and human rights, a chance to deport millions of people, a chance to create camps and registries for Muslims, a chance to expand the prison industrial complex, a chance to expand its drone wars, or a chance to turn back the gains won by our struggles. We pledge resistance to this renewed attack on our communities.  As we resist, we will create new governing institutions, new economic relationships, and new ways of being human. What we will not do is sanction and/or normalize “overt” white supremacy.” In addition to the multi-city protests, they are hosting a nationwide on-line town hall and evaluation call that night.