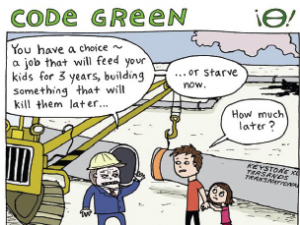 I want to talk here about the work being done by labor activists and environmentalists. Environmentalists are getting more and more concerned about job creation, and labor unions are looking more and more toward solar energy and mandated efficiency programs to keep their members working. This convergence of interests is creating policy moves around the country that are shaking up the received wisdom about economic growth being dependent on cheap and plentiful fossil fuels.

A decade ago, environmentalists felt that climate change and other threats to life were so serious and imminent that the need to shut down polluting facilities overrode all other considerations, including people’s jobs. What was the point of keeping someone working if the impact of that job endangered our future – our imminent future?

But that thinking is totally obsolete now. Coal is a net job destroyer, with mountaintop removal and other mechanizing processes cutting coal field jobs in half over the last 30 years, and fracking operations, once installed, proceed with very little demand for labor. On the other hand, as we move slowly into a very lethargic economic recovery, by far the largest source of decent paying jobs is green energy – also the fastest growing employment sector.

So far from being a job destroyer, the move away from polluting energy sources and into renewables turns out to be our most realistic path to job growth. And even more important, both the general public and policy makers are starting to get this.

Here in LA we’re making dramatic increases in local rooftop solar through incentives like net metering and the Feed-In-Tariff (FIT), and by pushing through increases in our utility’s energy efficiency budget. Both of these are essentially utility-funded jobs programs, which attack unemployment in LA’s poorest neighborhoods. A significant portion of the LADWP’s efficiency budget is spent on IBEW Local 18’s Utility Pre-Craft Training program, which trains the utility’s future workforce by doing energy efficiency upgrades on low-income housing units. And the utility just unanimously voted in an efficiency goal for the whole city that will cut our electricity use 15% below 2010 levels by 2020. This will work even more young minority workers into the program.

This job growth is mirrored in other parts of the country as well, yet despite a surging blue-green alliance, the relations between labor and ecologists still shows trouble spots. As Sierra Club activists teamed up with friends in Food & Water Watch to support residents trying to keep a couple of hundred oil wells from being drilled in Carson, the Governor and several unions brought in a legion of workers to advocate for the wells and block the locally engendered moratorium. And when eco-advocates from all over southern California surrounded San Onofre nuclear power plant to protest Southern California Edison’s ill-advised move to restart the ailing facility without properly diagnosing its problems, members of IBEW angrily counter-demonstrated. When a few hundred jobs were in the balance, the alliance that had helped create IBEW’s model UPCT energy efficiency program was forgotten, and some anti-nuclear activists reported getting spat on by union members.

Getting closer to union leaders and having conversations about our collaborative future will help us address these issues and plot a course that will strengthen both our hands. But we’ll have to speak carefully and listen attentively to work around thorny issues that could threaten the job ahead of us. Environmentalists will have to grasp the serious commitment union business managers have to their members, especially those who are out of work. How can a union turn down a call from a drilling field for a construction crew when a high percentage of members are out of work? And it’s especially sensitive when middle-aged members are struggling to make the quota of hours necessary to qualify for pensions and medical benefits.

If we greens are to really hold up our end of the deal, we’ll have to seriously commit, not only to influencing public policy in the direction of green jobs, but more importantly in the direction of long-term, good paying, career-path, and collectively bargained jobs. Until those jobs are coming across the desks of union dispatchers, it’ll be hard for unions to give more than lip service to the task of fighting climate change.
But that doesn’t mean they shouldn’t try. In the long run, human survival will demand a whole bunch of tool-belt jobs be created to build the distributed infrastructure of the new utility model, with large scale renewables in outlying areas supplemented by local rooftop solar and intensive efficiency retrofits in residences and businesses. To bring down our climate disrupting emissions by the 80% scientists are telling us is necessary, we’ll need to train and hire an army of workers to realize this goal.

Energy storage, electric vehicle charging infrastructure, double-glazed window installation, computerized thermostats, on-demand water heaters– these are a few of the job creators of the future. Developing low-cost methods of getting insulation into the walls of houses that were built to the specifications of obsolete building codes is another. These are the fields union organizers can work to bring into their jurisdiction, and green groups can provide political support for them.

Los Angeles presents a fairly union friendly political arena in which this kind of work force development can really take off. And in some key areas it already is. But areas of anti-union sentiment are close to the surface, and can’t be ignored. If we’re to make this economic resurgence really happen, environmental leaders and union leaders will have to seriously strategize together – and often. We won’t make it by walking alone.

If you enjoyed this post, please consider leaving a comment or subscribing to the RSS feed to have future articles delivered to your feed reader.
By Change-Links|2014-09-22T01:48:14-05:00August 29th, 2014|Ecology, Energy, Environment, Kent Minault|0 Comments