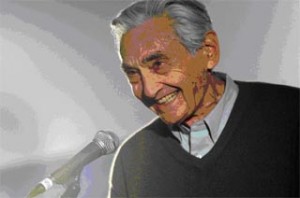 The historian and activist dedicated his life to “the countless small actions of unknown people”.

{Howard was a friend of Change Links}

Editor’s note: Today, January 27, is the second anniversary of the death of Howard Zinn. An active participant in the Civil Rights movement, he was dismissed in 1963 from his position as a tenured professor at Spelman College in Atlanta after siding with black women students in the struggle against segregation. In 1967, he wrote one of the first, and most influential, books calling for an end to the war in Vietnam. A veteran of the US Army Air Force, he edited The Pentagon Papers, leaked by whistleblower Daniel Ellsberg, and was later designated a “high security risk” by the FBI.

His best-selling A People’s History of the United States spawned a new field of historical study: People’s Histories. This approach countered the traditional triumphalist examination of “history as written by the victors”, instead concentrating on the poor and seemingly powerless; those who resisted imperial, cultural and corporate hegemony. Zinn was an award-winning social activist, writer and historian – and so who better to share his memory than his close friend and fellow intellectual giant, Noam Chomsky?

Cambridge, Mass – It is not easy for me to write a few words about Howard Zinn, the great American activist and historian. He was a very close friend for 45 years. The families were very close too. His wife Roz, who died of cancer not long before, was also a marvellous person and close friend. Also sombre is the realisation that a whole generation seems to be disappearing, including several other old friends: Edward Said, Eqbal Ahmed and others, who were not only astute and productive scholars, but also dedicated and courageous militants, always on call when needed – which was constant. A combination that is essential if there is to be hope of decent survival.

Howard’s remarkable life and work are summarised best in his own words. His primary concern, he explained, was “the countless small actions of unknown people” that lie at the roots of “those great moments” that enter the historical record – a record that will be profoundly misleading, and seriously disempowering, if it is torn from these roots as it passes through the filters of doctrine and dogma. His life was always closely intertwined with his writings and innumerable talks and interviews. It was devoted, selflessly, to empowerment of the unknown people who brought about great moments. That was true when he was an industrial worker and labour activist, and from the days, 50 years ago, when he was teaching at Spelman College in Atlanta, Georgia, a black college that was open mostly to the small black elite.

While teaching at Spelman, Howard supported the students who were at the cutting edge of the civil rights movement in its early and most dangerous days, many of whom became quite well-known in later years – Alice Walker, Julian Bond and others – and who loved and revered him, as did everyone who knew him well. And as always, he did not just support them, which was rare enough, but also participated directly with them in their most hazardous efforts – no easy undertaking at that time, before there was any organised popular movement and in the face of government hostility that lasted for some years. Finally, popular support was ignited, in large part by the courageous actions of the young people who were sitting in at lunch counters, riding freedom buses, organising demonstrations, facing bitter racism and brutality, sometimes death.

By the early 1960s, a mass popular movement was taking shape, by then with Martin Luther King in a leadership role – and the government had to respond. As a reward for his courage and honesty, Howard was soon expelled from the college where he taught. A few years later, he wrote the standard work on SNCC (the Student Non-violent Coordinating Committee), the major organisation of those “unknown people” whose “countless small actions” played such an important part in creating the groundswell that enabled King to gain significant influence – as I am sure he would have been the first to say – and to bring the country to honour the constitutional amendments of a century earlier that had theoretically granted elementary civil rights to former slaves – at least to do so partially; no need to stress that there remains a long way to go.

On a personal note, I came to know Howard well when we went together to a civil rights demonstration in Jackson Mississippi in (I think) 1964, even at that late date, a scene of violent public antagonism, police brutality and indifference – or even co-operation – with state security forces on the part of federal authorities, sometimes in ways that were quite shocking.

After being expelled from the Atlanta college where he taught, Howard came to Boston, and spent the rest of his academic career at Boston University, where he was, I am sure, the most admired and loved faculty member on campus, and the target of bitter antagonism and petty cruelty on the part of the administration. In later years, however, after his retirement, he gained the public honour and respect that was always overwhelming among students, staff, much of the faculty, and the general community. While there, Howard wrote the books that brought him well-deserved fame. His book Logic of Withdrawal, in 1967, was the first to express clearly and powerfully what many were then beginning barely to contemplate: that the US had no right even to call for a negotiated settlement in Vietnam, leaving Washington with power and substantial control in the country it had invaded and by then already largely destroyed.

Rather, the US should do what any aggressor should: withdraw, allow the population to somehow reconstruct as they could from the wreckage, and if minimal honesty could be attained, pay massive reparations for the crimes that the invading armies had committed, vast crimes in this case. The book had wide influence among the public, although to this day, its message can barely even be comprehended in elite educated circles, an indication of how much necessary work lies ahead.

Significantly, among the general public by the war’s end, 70 per cent regarded the war as “fundamentally wrong and immoral”, not “a mistake,” a remarkable figure, considering the fact that scarcely a hint of such a thought was expressible in mainstream opinion. Howard’s writings – and, as always, his prominent presence in protest and direct resistance – were a major factor in civilising much of the country.

In those same years, Howard also became one of the most prominent supporters of the resistance movement that was then developing. He was one of the early signers of the Call to Resist Illegitimate Authority and was so close to the activities of Resist that he was practically one of the organisers. He also took part at once in the sanctuary actions that had a remarkable impact in galvanising anti-war protest. Whatever was needed – talks, participation in civil disobedience, support for resisters, testimony at trials – Howard was always there.

Even more influential in the long run than Howard’s anti-war writings and actions was his enduring masterpiece, A People’s History of the United States, a book that literally changed the consciousness of a generation. Here he developed with care, lucidity and comprehensive sweep his fundamental message about the crucial role of the people who remain unknown in carrying forward the endless struggle for peace and justice, and about the victims of the systems of power that create their own versions of history and seek to impose it. Later, his “Voices” from the People’s History, now an acclaimed theatrical and television production, has brought to many the actual words of those forgotten or ignored people who have played such a valuable role in creating a better world.

Howard’s unique success in drawing the actions and voices of unknown people from the depths to which they had largely been consigned has spawned extensive historical research following a similar path, focusing on critical periods of US history, and turning to the record in other countries as well, a very welcome development. It is not entirely novel – there had been scholarly inquiries of particular topics before – but nothing to compare with Howard’s broad and incisive evocation of “history from below”, compensating for critical omissions in how US history had been interpreted and conveyed.

Howard’s dedicated activism continued, literally without a break, until the very end, even in his last years, when he was suffering from severe infirmity and personal loss – though one would hardly know it when meeting him or watching him speaking tirelessly to captivated audiences all over the country. Whenever there was a struggle for peace and justice, Howard was there, on the front lines, unflagging in his enthusiasm, and inspiring in his integrity, engagement, eloquence and insight; a light touch of humour in the face of adversity, and dedication to non-violence and sheer decency. It is hard even to imagine how many young people’s lives were touched, and how deeply, by his achievements, both in his work and his life.

There are places where Howard’s life and work should have particular resonance. One, which should be much better known, is Turkey. I know of no other country where leading writers, artists, journalists, academics and other intellectuals have compiled such an impressive record of bravery and integrity in condemning crimes of the state, and going beyond to engage in civil disobedience to try to bring oppression and violence to an end, facing and sometimes enduring severe repression, and then returning to the task.

It is an honourable record, unique to my knowledge, a record of which the country should be proud. And one that should be a model for others, just as Howard Zinn’s life and work are an unforgettable model, sure to leave a permanent stamp on how history is understood and how a decent and honourable life should be lived.

Noam Chomsky is Institute Professor emeritus in the MIT Department of Linguistics and Philosophy. He is the author of numerous bestselling political works, including 9-11: Was There an Alternative? (Seven Stories Press), an updated version of his classic account, just being published this week with a major new essay – from which this post was adapted – considering the ten years since the 9/11 attacks.

A version of this piece was originally published on TomDispatch.com.