Protest Senseless Murder with Impunity Of Journalists In Mexico

Protest Senseless Murder with Impunity Of Journalists In Mexico

“The Truth Is Not Killed By Killing Journalists” 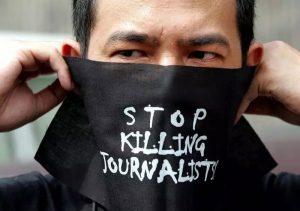 Protests have been launched in Los Angeles. A group of journalists from Asociación de Programadores en Español of KPFK, La Coordinadora Independencia, Inmigrantes Unidos en Resistencia and other organizations held a press conference in front of the Mexican Consulate on Friday, May 19 to demand that the Mexican government “Stop the Murders of Journalists.” Evidence of impunity for such killings in Mexico was presented and a vigil for the murder of Mexican journalist Javier Valdez Cárdenas killed on May 15, 2017 in Sinaloa was held. A list of the scores of journalists killed was released and can be found here: httpss://es.wikipedia.org/wiki/Anexo:Periodistas_asesinados_en_M%C3%A9xico#cite. More information can be obtained from  martha.ugarte@hotmail.com

If you enjoyed this post, please consider leaving a comment or subscribing to the RSS feed to have future articles delivered to your feed reader.
By Change-Links|2017-05-27T03:31:08-05:00May 27th, 2017|Bella De Soto, Independent Media, Justice/Injustice, Latin America, Mexico, Movements|0 Comments