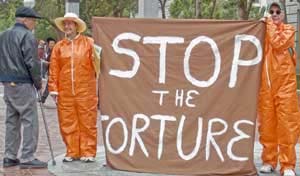 One way to measure a society is    by how it treats its prisoners.

After three weeks of the longest and largest hunger strike in California prisons, the Los Angeles Times finally mentioned it.

Since the Sixties, a huge industrial prison complex had grown across the US, one in which the suffering of over two million men and women (about one in 99 throughout the population) is a corporate profit point.

This system has grown out of the so-called “War on Drugs.” This “war” was initiated by government to destroy the movements of the Sixties.

In the early Sixties, LSD started to make its way into the population, first among artists and well known intellectuals. It became more widely known and was manufactured by some folks in the Bay Area. Musicians and other creative people got hold of it, such as Ken Kesey, and a counter-culture was started.

The student and political movements and this new “Hippy/Counter-Culture” merged. Its force spread across the country  The “ruling classes” freaked out, and arrests for drug violations escalated. During the middle and late Seventies, large manufacturing bases in places like South Central L.A. closed down and moved to cheaper labor venues. Jobs and money dried up. And the only opportunity for many unemployed youth was to sell drugs. This enabled the growing industrial prison complex to fill their jails with more and more minority youth.

While waging wars in Central America, the CIA brought tons of cocaine into the ghettos. This helped to criminalize whole generations and to destroy new political movements, like the Black Panthers and others.

In the Seventies and Eighties many saw drugs flooding the minority communities. It seemed at times of potential unrest, that “Reds,” (barbiturates) proliferated. At other times uppers would be would be abundantly available. Both the drugs and subsequent raids diminished community organizing against the “misdeeds” of corporations and the government.  This was social engineering by the corporate ruling classes.

Today we also have the pharmaceutical industries social engineering with constant ads on TV in magazine for their drugs. Drugs that have long list, in small print, of the side effects and who might be hurt by their uses.

So today we have this monster of an entrenched prison complex where billions of dollars are made. And while manufactures enjoy obscene profits from their cheap overseas Asian labor,  while our own youth live in torturous conditions. Which is why reform is so dreadfully needed. And why there is currently massive hunger strikes taking place.

ALEC (the American Legislative Exchange Council), is a front group for major corporations, the Koch brothers and right-wing lobbying groups actively disseminated model bills promoting its agenda to state leaders. It is a very secret group. They go from state to state, bringing in State Legislators to promote their legislative programs. Recently, they have been teaching how the states can restrict voting. Wisconsin,  South Carolina, Ohio, Minnesota and other states have enacted ID restrictions, which put the elderly, youth and poor folk at a severe disadvantage.

Ohio’s HB 159 requires voters to show one of five forms of ID to vote in person: a driver’s license, state ID, military ID, US passport or a “new, free photo ID that State Bureau of Motor Vehicles would dispense to indigent citizens who qualify.” Thus, Ohio effectively disenfranchised 900,000 Ohioans, supposedly due to the negligible and entirely over-reported handful of voter fraud instances that occur during elections.

Many state leaders have adopted anti-worker, anti-union language of the ALEC model bills.

In one of their models, the group outlines its opposition to the Environmental Protection Agency’s (EPA’s) regulation of greenhouse gases. ALEC claims that the rise in carbon dioxide and greenhouse gases are not linked to a decline in welfare or public health. “Indeed,” ALEC’s bill remarks, “quite the opposite is true.” But then, the Koch’s are oil billionaires. You do the math.

As we go to press the Republicans are trying to crash the economy, by supposedly linking the Debt Ceiling and the US economic deficits. A reasons is to the make the economy impossible to fix for Democrats and Obama, giving them an upper hand in the 2012 elections.

Also at this date U.S. companies are holding more cash in the bank than at any point on record, underscoring persistent worries about financial markets and about the sustainability of the economic recovery. And Wall Street wants to get their dirty hands on the Social Security Trillion dollar account, and do what they did to home mortages. .

The Federal Reserve reported Thursday that nonfinancial companies had socked away $1.84 trillion in cash and other liquid assets as of the end of March, up 26% from a year earlier and the largest-ever increase in records going back to 1952. Cash made up about 7% of all company assets, including factories and financial investments, the highest level since 1963.

We just had the massive right-wing murders in Norway.Someone wondered if we are going start waterboarding other right-wingers  to see who may be planning future attacks. Koch Brothers or Murdock anyone?

And sadly Amy Winehouq2 and her beautiful soul, died for the sins of our societies..

If you enjoyed this post, please consider leaving a comment or subscribing to the RSS feed to have future articles delivered to your feed reader.
By John Johnson|2011-08-01T14:03:28-05:00August 1st, 2011|Commentary, Democracy, Editorial, Human Rights, John Johnson|0 Comments