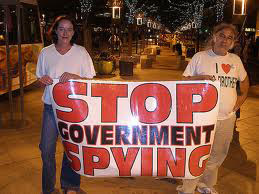 Obama is siding with police who want to use GPS devices to track you without a warrant.

President Barack Obama is actually siding with police who want to use GPS devices to track you without a warrant. It always disturbed me when on “Star Trek” the captain asked the ship’s computer where a crew member was and was told the person’s exact location. Even civilians such as the ship’s physician and the empathy counselor were not immune from these inquiries, the answers to which could after all sometimes have been embarrassing. Is America heading toward being one big star ship, where government officials can casually inquire at will into our whereabouts and private doings?

Among the many elements of the Obama administration that have disappointed civil libertarians is its interest in spying on Americans. The Bush administration had instituted massive warrantless wiretapping and gathering of telephone records, with the complicity of most telecom corporations. Those who care about the Bill of Rights had hoped that Eric Holder’s Department of Justice would take a stand for the Fourth Amendment, which should be on the endangered species list along with the golden tree frog and the St. Helena dragonet.

The administration is appealing a Washington, D.C., federal appeals court ruling that threw out the case that law enforcement had built against a suspected cocaine distributor because the officers attached a global positioning satellite tracking device to his automobile without a warrant and then followed his movements for a whole month. That they tracked the suspect for so long without bothering to involve a judge was one basis for the ruling.

Supporters of warrantless surveillance of this sort argue that a person’s movements in public are not protected by the Fourth Amendment. But GPS tracking is very precise and can follow a car everywhere–onto farms or estates and into enclosed garages on private property. If there is evidence that a crime is being committed in, say, a garage, then a warrant should be obtained from a judge. In the absence of such evidence it is unconstitutional for the government to monitor the precise location of a piece of private property being driven on or parked on private property.

It should be remembered that it is perfectly possible for the police to make a mistake or act maliciously and to monitor someone who is innocent. The ACLU charges that these practices are increasingly common. If police and other security personnel are allowed to engage in domestic surveillance of this sort without a court warrant, they can start following large numbers of innocent people and learn details of their private lives. Just this year, Tacoma, Wash., police engaged in unconstitutional surveillance of anti-war activists, using an employee at a military base, which is even more troubling. Blanket permission for law enforcement to conduct warrantless GPS tracking of activists could reveal their private peccadilloes, which in turn could be used to blackmail them.

Another egregious case is that of college student Yasir Afifi, who found an FBI tracking device on his automobile during an oil change. Afifi, from a mixed American and Egyptian heritage, has no known associations with radicals, but his father had been active in the local Muslim community until his death last year and the family sends remittances to relatives in Egypt, a pattern of behavior that may have triggered the surveillance. Disturbingly, the federal Ninth District Court of Appeals found that the FBI had a right to put the device on Afifi’s car as it sat in his driveway. This ruling violates the principle of “curtilage,” which holds that the area immediately around a person’s house is protected from unreasonable search by the Fourth Amendment. In a fiery dissent, Judge Alex Kozinski complained that his colleagues’ decision gives “the government the power to track the movements of every one of us, every day of our lives.” It is not known whether the FBI, who monitored Afifi for three to six months, ever obtained a court warrant or, if so, how many months it covered.

In the Washington, D.C., appellate court decision, handed down last fall, Judge Douglas H. Ginsburg shot down the argument that GPS tracking was like tailing a suspect in public. He wrote, “We hold the whole of a person’s movements over the course of a month is not actually exposed to the public because the likelihood a stranger would observe all those movements is not just remote, it is essentially nil.”

Part of what defines public and private is a reasonable citizen’s expectations. You wouldn’t expect all your movements for a month to be public, even if they were in an automobile. It is that understandable expectation of privacy that brings the Fourth Amendment into play. Ginsburg continued, “A reasonable person does not expect anyone to monitor and retain a record of every time he drives his car, including his origin, route, destination, and each place he stops and how long he stays there; rather, he expects each of those movements to remain disconnected and anonymous.” The full court of nine judges upheld the three-judge panel’s decision to throw out the case, which was against nightclub owner Antoine Jones.

The federal rulings so far on GPS tracking have been all over the map, so to speak, and that the Fourth Amendment will meaningfully survive the almost cosmic electronic surveillance capabilities of our burgeoning national security state is not at all clear. So far many of our eminent federal judges seem perfectly content with having police officers sneak around in our driveways, with allowing them to attach tracking devices to our private property, and with permitting them then to monitor everywhere we go and everyone we visit, without a warrant, for months at a time.

Judge Ginsburg and two colleagues are so far all that stand in the way of this dystopian future becoming our present reality. Unfortunately, because Obama and Holder disagree with Ginsburg, his principled arguments will prevail only if they are permitted to do so by the likes of Antonin Scalia and Clarence Thomas. Welcome to Starship Amerika.

If you enjoyed this post, please consider leaving a comment or subscribing to the RSS feed to have future articles delivered to your feed reader.
By John Johnson|2011-05-01T19:38:40-05:00May 1st, 2011|Commentary, Democracy, Free Speech, Human Rights, Writers|0 Comments