Inside my motor vehicle she smoked.

We laughed and chatted just outside her home.

Police drove near to see this lovely sight.

Her blonde hair out of place this time of night:

A Puerto Rican, but was very white.

Pulled up, and said the car was far away.

My braided hair became a flaw this day.

The curb ‘not close enough’—they called a play.

“Get out the car!” they yelled—emotions high.

Once out the car they looked me in the eye.

Then sudden grabbed and tried to throw me down.

I wasn’t moved. He reached to spray my crown.

It burned my eyes like pepper to the ground.

They pounced and pushed my face on the cement;

Would dash me in the squad car cuffed and rent.

They said that there was white nearby my friend.

A half a dozen squad cars now were there.

My car was towed, then drove me off to where

A nurse was told I fought and like a bear.

Toward their car again and off to jail.

By then had had enough and spurred their fail.

Reached home—my parents wondered, “What is this?”

They saw me bruised. I told them I was tricked.

I got to court: the case did not exist. 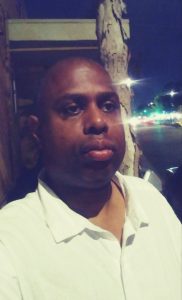 D. O. T. Marceo was born in Boyle Heights, Los Angeles to a family living in South Los Angeles. Growing up he would spend time in the summers at his maternal grandmother’s house in the country parts of Costa Rica. The path to his bachelor of arts degree in international relations from UC Merced began at Santa Monica College. He published his first collection of poetry, entitled “My Diamond,” in the fall of 2019.