Poetry Corner: “The End and the Beginning”

“The End and the Beginning”:
by Wisława Szymborska

After every war
someone has to clean up.
Things won’t
straighten themselves up, after all.

Someone has to push the rubble
to the side of the road,
so the corpse-filled wagons
can pass.

Someone has to get mired
in scum and ashes,
sofa springs,
splintered glass,
and bloody rags. 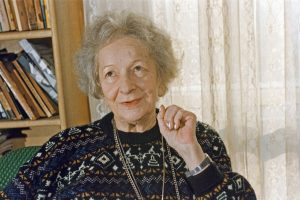 Well-known in her native Poland, Wisława Szymborska (1923–2012) received international recognition when she won the Nobel Prize for Literature in 1996. In awarding the prize, the Academy praised her “poetry that with ironic precision allows the historical and biological context to come to light in fragments of human reality.” Collections of her poems that have been translated into English include People on a Bridge (1990), View with a Grain of Sand: Selected Poems (1995), Miracle Fair (2001), and Monologue of a Dog (2005). Readers of Szymborska’s poetry have often noted its wit, irony, and deceptive simplicity. Her poetry examines domestic details and occasions, playing these against the backdrop of history.

Szymborska lived most of her life in Krakow; she studied Polish literature and society at Jagiellonian University and worked as an editor and columnist. A selection of her reviews was published in English under the title Nonrequired Reading: Prose Pieces (2002). She received the Polish PEN Club prize, the Goethe Prize, and the Herder Prize.

If you enjoyed this post, please consider leaving a comment or subscribing to the RSS feed to have future articles delivered to your feed reader.
By Change-Links|2022-04-30T18:01:52-05:00April 30th, 2022|Europe, Feminism, Peace, Peace and War, Poetry Corner, War|0 Comments